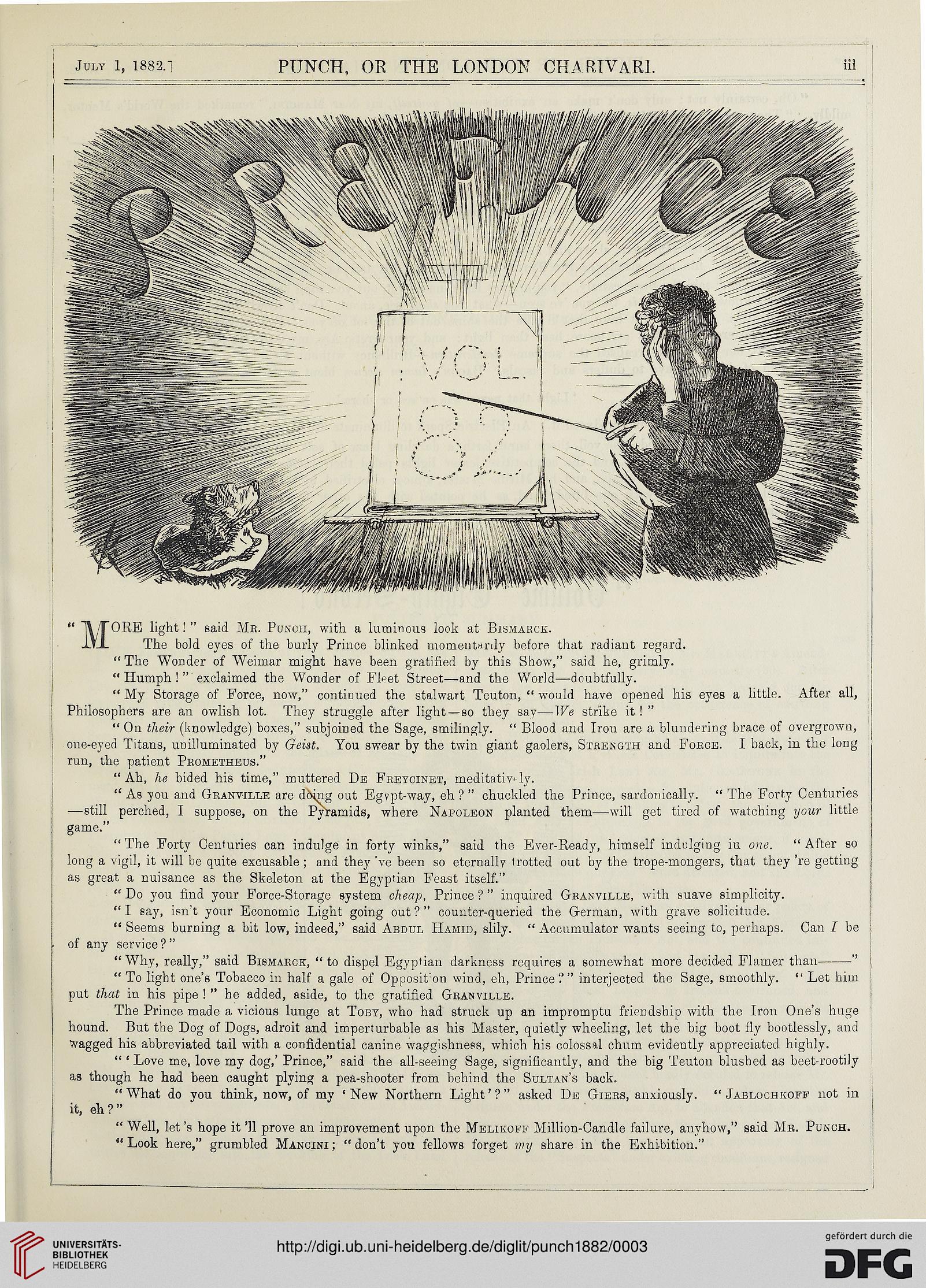 
PTJNCH, OR THE LONDON CHARIVaRI.

1V± The bold eyes of the burly Prince blinked momeutnrdy before that radiant regard.

“ The Wonder of Weimar might have been gratified by this Show,” said he, grimly.

“ My Storage of Force, now,” contioued the stalwart Teuton, “ would have opened his eyes a little. After all,
Philosophers are an owlish lot. They struggle after light — so they say—We strike it ! ”

“ On tlieir (knowledge) boxes,” subjoined the Sage, smilingly. “ Blood and Tron are a blundering brace of overgrown,
oue-eyed Titans, unilluminated by Geist. You swear by the twin giant gaolers, Strength and Foece. I back, in the long
run, the patient Prometheus.”

“ As you and Granville are dbrng out Egvpt-way, eh ? ” chuckled the Prince, sardonically. “ The Forty Centuries
—still perched, I suppose, on the Pyramids, where Napoleon planted them—will get tired of watching your little
game.”

“ The Forty Centuries can indulge in forty winks,” said the Ever-Ready, himself indulging iu one. “ After so
long a vigil, it will be quite excusable ; and they ’ve been so eternally trotted out by the trope-mongers, that they ’re getting
as great a nuisance as the Skeleton at the Egyptian Feast itself.”

“ Do you find your Force-Storage system cheap, Prince ? ” inquired Granville, with suave simplicity.

“ I eay, isn’t your Economic Light going out ? ” counter-queried the German, with grave solicitude.

“ To light one’s Tobacco in half a gale of Opposit :on wind, eh, Prince ? ” interjected the Sage, smoothly. “ Let him
put that in his pipe ! ” he added, aside, to the gratified Granville.

The Prince made a vicious lunge at Toby, who had struck up an impromptu friendship witlr the Iron One’s huge
hound. But the Dog of Dogs, adroit and imperturbable as his Master, quietly wheeling, let the big boot fly bootlessly, and
Tagged his abbreviated tail with a confidential canine waggishness, which his colossal chum evidently appreciated highly.

“ ‘ Love me, love my dog,’ Prince,” said the all-seeing Sage, significantly, and the big Teuton blushecl as beet-rootiiy
as though he had been caught plying a pea-shooter from behind the Sultan’s back.

“ Look here,” grumbled Mancini ; “ don’t you fellows forget my share in the Exhibition.”