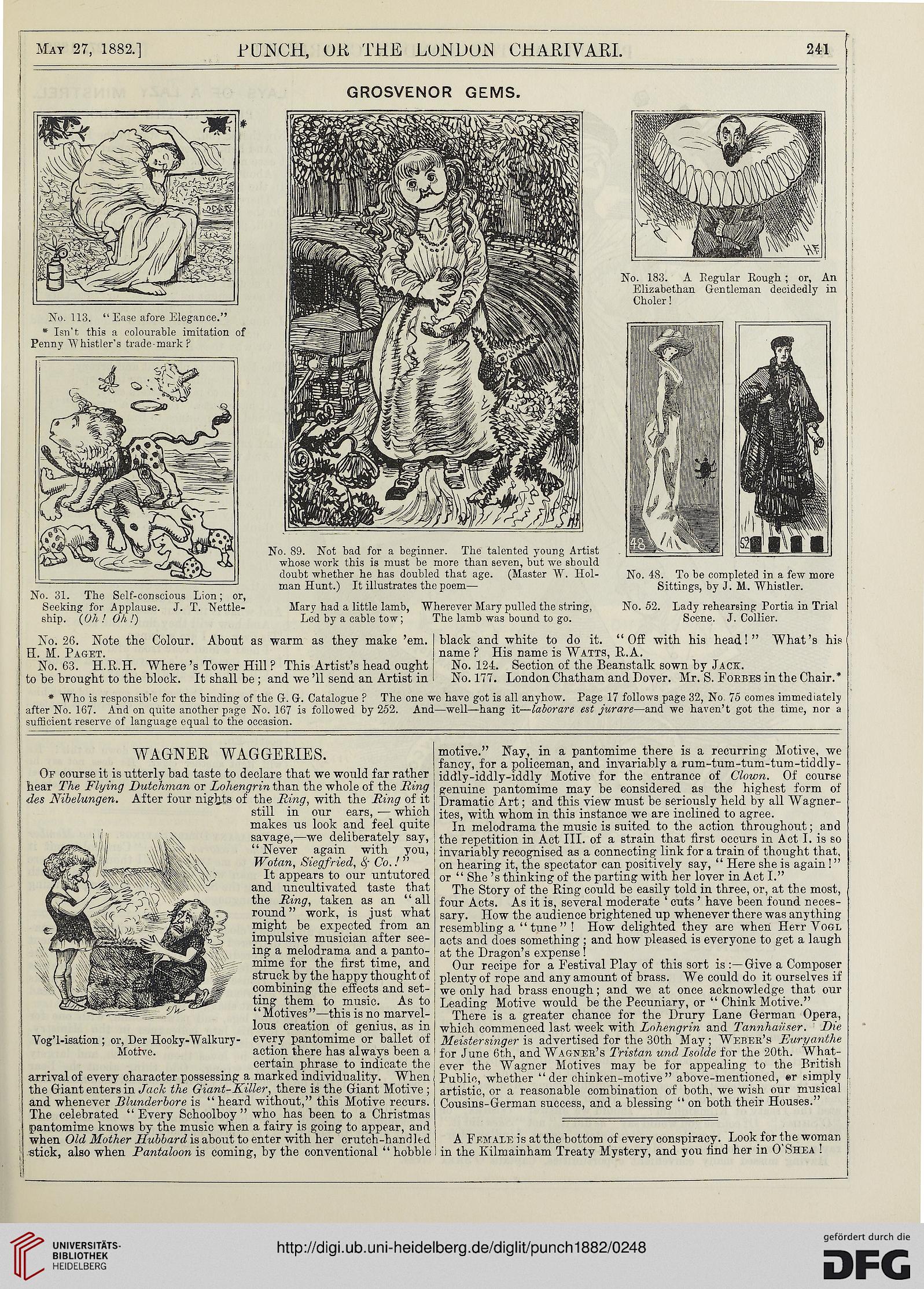 * Isn’t this a colourable imitation of
Penny Whistler’s trade-mark ?

No. 89. Not bad for a beginner. The talented young Artist
whose work this is must be more than seven, but we should
doubt whether he has doubled that age. (Master W. Ilol-
man Hunt.) It illustrates the poem—

Mary had a little lamb, ’W’herever Mary pulled the string,
Led by a cable tow; The lamb was bound to go.

No. 183. A Eegular Rough; or, An
Elizabethan Gentleman decidedly in
Choler!

* Who is responsible for the binding of the G. G. Catalogue ? The one we have got is all anyhow. Page 17 follows page 32, No 75 comes immediately
afterNo. 167. And on quite another page No. 167 is followed by 252. And—well—hang it—laborare est jurare—an& we haven’t got the time, nor a
sufficient reserve of language equal to the occasion.

Of course it is utterly bad taste to declare that we would far rather
hear The Flying Dutchman or Lohengrin than the whole of the Ring
des Nihelungen. After four nigbfs of the Iling, with the Ring of it

still in our ears, — which
makes us look and feel quite
savage,—we deliberately say,
“ Never again with you,
Wotan, Siegf ried, 8f Co.! ”

It appears to our untutored
and uncultivated taste that
the Ring, taken as an “ all
round ” work, is just what
might be expected from an
impulsive musician after see-
ing a melodrama and a panto-
mime for the first time, and
struck by the happy thought of
combining the effects and set-
ting them to music. As to
“Motives”—this is no marvel-
lous creation of genius, as in
every pantomime or ballet of
action there has always been a
certain phrase to indicate the
arrival of every character possessing a marked individuality. When,
the Giant enters in Jack the Giant-Riller', there is the Giant Motive ;
and whenever Blunderhore is “ heard without,” this Motive recurs.
The celebrated “ Every Schoolboy” who_ has been to a Christmas
pantomime knows by the music when a fairy js going to appear, aod
when Old Mother Hubhard is about to enter with her crutch-handled
stick, also when Rantaloon is coming, by the conventional “ hobble

motive.” Nay, in a pantomime there is a recurrmg Motive, we
fancy, for a policeman, and invariably a rum-tum-tum-tum-tiddly-
iddly-iddly-iddly Motive for the entrance of Clown. Of course
genuine pantomime may be considered as the highest form of
Dramatic Art; and this view must be seriously held by aU Wagner-
ites, with whom in this instance we are inclined to agree.

In melodrama the music is suited to the action throughout; a.nd
the repetition in Act III. of a strain that first occurs in Act I. is so
invariably recognised as a connecting link for a train of thought that.
on hearing it, the spectator can positively say, “ Here she is again! ”
or “ She ’s thinking of the parting with her lover in Act I.”

The Story of the Ring could be easily told in three, or, at the most,
four Acts. As it is, several moderate ‘ cuts ’ have been found neces-
sary. IIow the audience brightened up whenever there was anything
resemblmg a “ tune ” ! How delighted they are when Herr Vogl
acts and does something ; and how pleased is everyone to get a laugh
at the Dragon’s expense !

Our recipe for a Festival Play of this sort is Give a Composer
plentyof rope and anyamount of brass. We could do it ourselves if
we only had brass enough; and we at once acknowledge that our
Leading Motive would be the Pecuniary, or “ Chink Motive.”

There is a greater chance for the Drury Lane German Opera,
which commenced last week with Lohengrin and Tannhaiiser. Die
Meistersinger is advertised for the 30th May; Weber’s Euryanthe
for June 6th, and Wagneb’s Tristan und, Isolde for the 20th. What-
ever the Wagner Motives may be for appealing to the British
Public, wbether “ der chinken-motive ” above-mentioned, er simplv
artistic, or a reasonable combination of both, we wish our musical
Cousins-German success, and a blessing “ on both their Houses.”

A Feataee is at the bottom of every conspiracy. Look for the woman
in the Kilmainham Treaty Mystery, and you find her in 0 Shea !