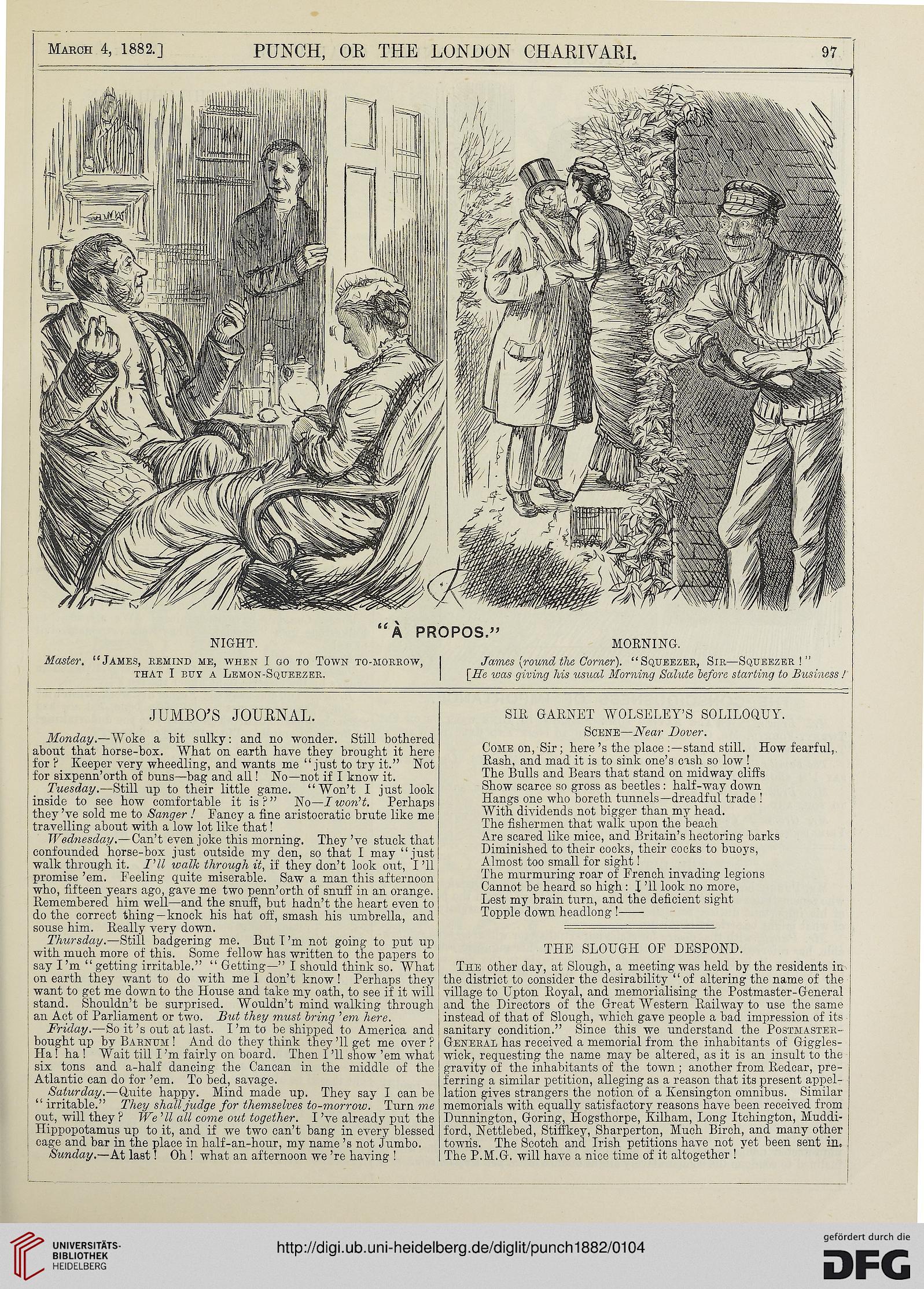 Master. “James, remind me, when I bo to Town to-morrow, I James [round the Corner). “Squeezer, Sir—Squeezer ! ”

that I Bur a Lemon-Squeezer. I \_He was giving his usual Morning Salute before starting to Business!

Monday.—Woke a bit sulky: and no wonder. Still bothered
abont tbat horse-box. What on earth have they brought it here
for ?. Keeper very wheedling, and wants me “ just to try it.” Not
for sixpenn’orth of buns—bag and all! No—not if I know it.

Tuesday.—Still up to their little game. “Won’t I just look
inside to see how comfortable it is?” No—Iwon't. ' Perhaps
they ’ve sold me to Sanger ! Fancy a fine aristocratic brute like me
travelling about with a low lot like that!

Wednesday.—Can’t even joke this morning. They ’ve stuck that
confounded horse-box just outside my den, so that I may “just
walk through it. I'll walk through ity if they don’t look out, I ’ll
promise ’em. Feeling quite miserable. Saw a man this afternoon
who, fifteen years ago, gave me two penn’orth of snuff in an orange.
Remembered him well—and the snufi, but hadn’t the heart even to
do the correct thing—knoclc his hat off, smash his umbrella, and
souse him. Really very down.

Thursday.—Still badgering me. But I ’m not going to put up
with much more of this. Some fellow has written to the papers to
say I ’m “ getting irritable.” “ Getting—” I should think so. What
on earth they want to do with me I don’t know! Perhaps they
i want to get me down to the House and take my oath, to see if it wil'l
stand. Shouldn’t be surprised. Wouldn’t mind walking through
an Act of Parliament or two. But they must hring ’em liere.

Friday.—So it ’s out at last. I ’m to be shipped to America and
bought up by Barnum ! And do they think they ’ll get me over ?
Ha! ha ! Wait tiil I ’m fairly on board. Then 1 ’ll show ’em what
six tons and a-half dancing the Cancan in the middle of the
Atlantic can do for ’em. To bed, savage.

Saturday.—Q/uite happy. Mind made up. They say I can be
“ irritable.” They shalljudge for themselves to-morrow. Turn me
out, will they ? We ’ll all come out together. I ’ve already put the
Hippopotamus up to it, and if we two can’t bang in every blessed
cage and bar in the place in half-an-hour, my name ’s not Jumbo.

Sunday,—At last! Oh ! what an afternoon we ’re having !

Come on, Sir; here ’s the place stand still. How fearful,
Rash, and mad it is to sink one’s cash so low !

The Bulls and Bears that stand on midway cliffs
Show scarce so gross as beetles : half-way down
Hangs one who boreth tunnels—dreadful trade !

With dividends not bigger than my head.

The fishermen that walk upon the beach

Almost too smaU for sight!

The murmuring roar of French invading legions
Cannot be heard so high: I ’ll look no more,

Lest my brain turn, and the deficient sight
Topple down headlong !-

The other day, at Slough, a meeting was held by the residents in
the district to consider the desirability “ of altering the name of the
village to Upton Royal, and memorialising the Postmaster-General
and the Directors of the Great Western Railway to use the same
instead of that of Slough, which gave people a bad impression of its
sanitary condition.” Since this we understand the Postmaster-
General has received a memorial from the inhabitants of Giggles-
wick, requesting the name may be altered, as it is an insult to the
gravity of t.he inhabitants of the town ; another from Redcar, pre-
ferring a similar petition, alleging as a reason that its present appel-
lation gives strangers the notion of a Kensington omnibus. Similar
memorials with equally satisfactory reasons have been received from
Dunnington, Goring, Hogsthorpe, Kilham, Long Itchington, Muddi-
ford, Nettlebed, Stiffkey, Sharperton, Much Birch, and many other
. towns. The Scotch and Irish petitions have not vet been sent in.c
i The P.M.G. will have a niee time of it altogether !