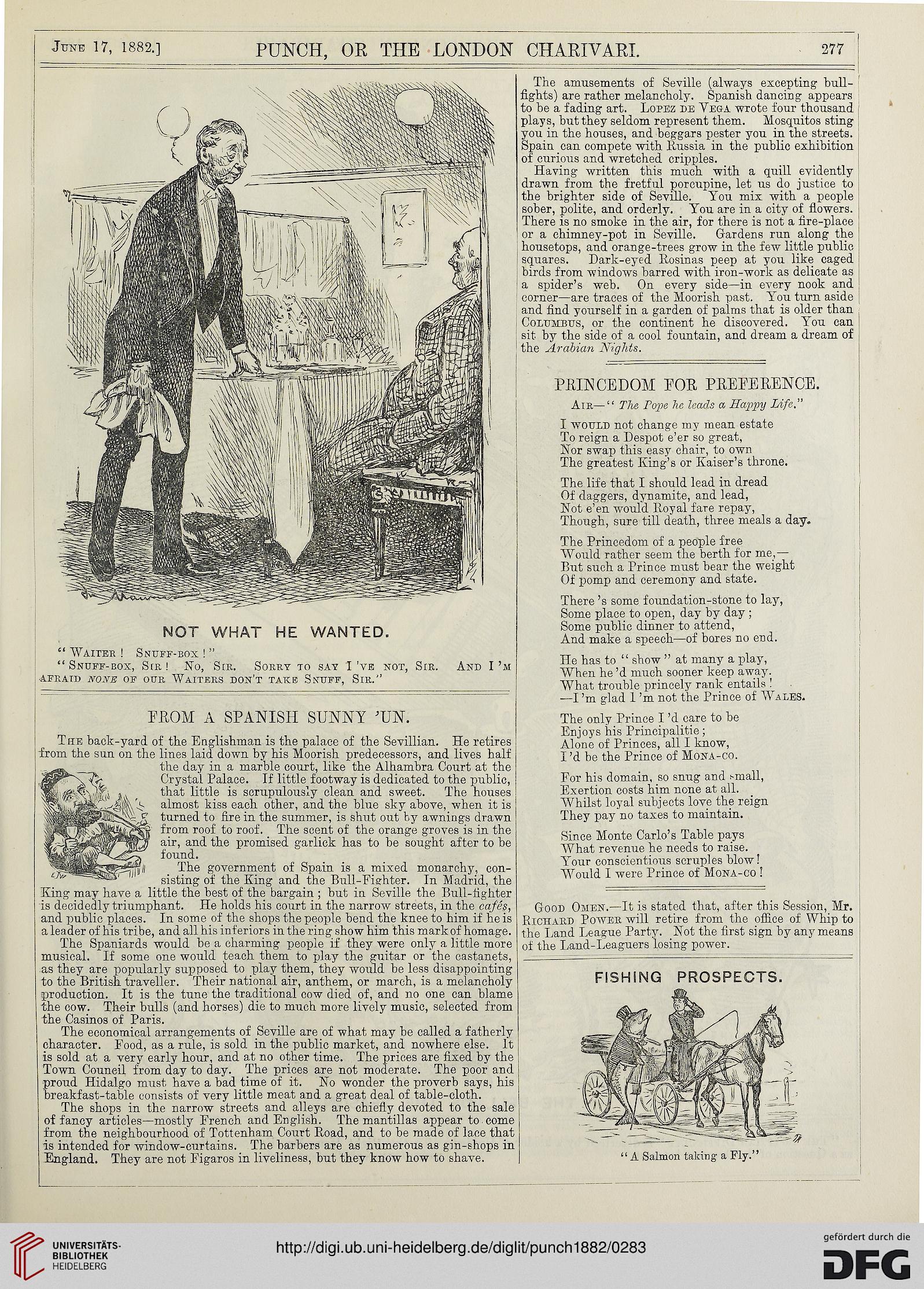 PUNCH, OR THE LONDON CHARIVARL

NOT WHAT HE WANTED.

The amusements of Seville (always excepting bull-
fights) are rather melancholy. Spanish dancing appears
to be a fading art. Lopez de Yega wrote four thousand
plays, butthey seldom represent them. Mosquitos sting
you in the houses, and beggars pester you in the streets.
Spain can compete with Russia in the public exhibition
of curious and wretched cripples.

Having written this much with a quill eyidently
drawn from the fretful porcupine, let us do justice to
the brighter side of Seville. You mix with a people
sober, polite, and orderly. You are in a city of flowers.
There is no smoke in the air, for there is not a fire-place
or a chimney-pot in Seville. Gardens run along the
housetops, and orange-trees grow in the few little public
squares. Dark-eyed Rosinas peep at you like caged
birds from windows barred with iron-work as delicate as
a spider’s web. On every side—in every nook and
corner—are traces of the Moorish past. You turn aside
and find yourself in a garden of palms that is older than
Columbus, or the continent he discovered. You can
sit by the side of a cool fountain, and dream a dream of
the Arabian Nights.

I would not change my mean estate
To reign a Despot e’er so great,

Nor swap this easy chair, to own
The greatest King’s or Kaiser’s throne.

The life that I should lead in dread
Of daggers, dynamite, and lead,

Not e’en would Koyal f'are repay,

Though, sure till death, three meals a day.

The Princedom of a people free
Would rather seem the berth for me,—

But such a Prince must bear the weight
Of pomp and ceremony and state.

There ’s some foundation-stone to lay,

Some place to open, day by day ;

Some public dinner to attend,

And make a speech—of bores no end.

When he ’d much sooner keep away.

T he back-yard of the Englishman is the palace of the Sevillian. He retires
from the sun on the lines laid down by his Moorish predecessors, and lives half
the day in a marble eourt, like the Alhambra Court at the
CrystaL Palace. If little footway is dedicated to the public,
that little is scrupulously clean and sweet. The houses
almost kiss each other, and the blue sky above, when it is
turned to fire in the summer, is shut out by awnings drawn
from roof to roof. The seent of the orange groves is in the
air, and the promised garliek has to be sought after to be
found.

The government of Spain is a mixed monarchy, con-
sisting of the King and the Bull-Fighter. In Madrid, the
King may have a little the best of the bargain ; but in Seville the Bull-fighter
is decidedly triumphant. He holds his court in the narrow streets, in the cafes,
and public places. In some of the shops the people bend the knee to him if he is
a leader of his tribe, and all his inferiors in the ring show him this markof homage.

The Spaniards would be a charming people if they were only a little more
musical. If some one would teach them to play the guitar or the castanets,
as they are popularly supposed to play them, they woiud be less disappointing
to the British traveller. Their national air, anthem, or march, is a melancholy
production. It is the tune the traditional cow died of, and no one can blame
the cow. Their bulls (and horses) die to much more lively music, selected from
the Casinos of Paris.

The economical arrangements of Seville are of what may be called a fatherly
character. Food, as a rule, is sold in the public market, and nowhere else. It
is sold at a very early hour, and at no other time. The prices are fixed by the
Town Couneil from day to day. The prices are not moderate. The poor and
proud Hidalgo must have a bad time of it. No wonder the proverb says, his
breakfast-table consists of very little meat and a great deal of table-cloth.

The shops in the narrow streets and alleys are chiefly devoted to the sale
of fancy articles—mostly French and English. The mantillas appear to come
from the neighbourhood of Tottenham Court Road, and to be made of lace that
is intended for window-curtains. The barbers are as numerous as gin-shops in
England. They are not Figaros in liveliness, but they know how to shave.

The only Prince I ’d care to be
Enjoys his Principalitie;

Alone of Princes, all I know,

I ’d be the Prince of Mona-co.

For his domain, so snug and unall,
Exertion costs him none at all.
Whilst loyal subjects 'love the reign
They pay no taxes to maintain.

Since Monte Carlo’s Table pays
What revenue he needs to raise.
Your conscientious scruples blow!
Would I were Prince of Mona-co !

Good Omen.—It is stated that, after tbis Session, Mr.
Richard Power will retire from the office of Whip to
the Land League Party. Not the first sign by any means
of the Land-Leaguers losing power.