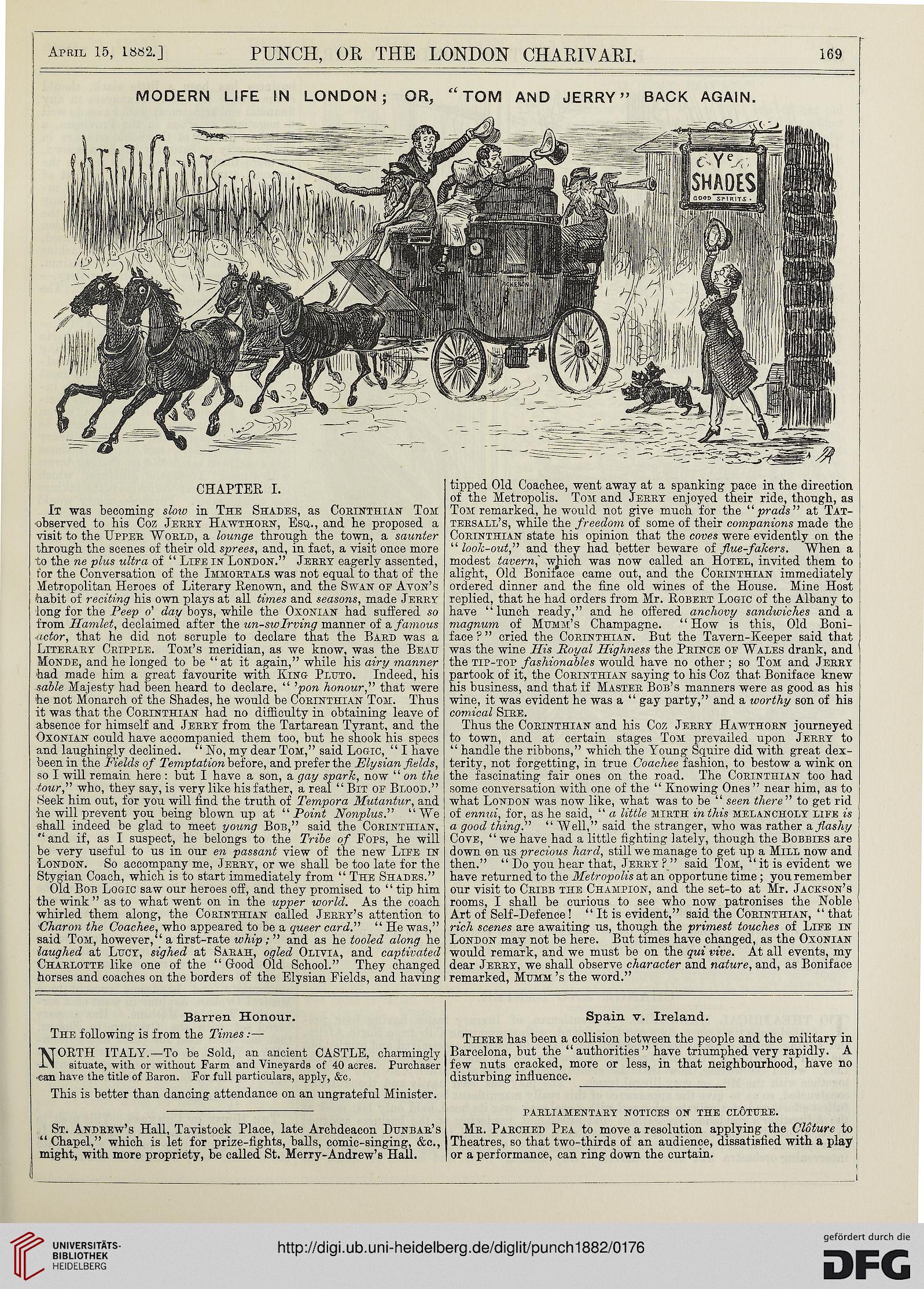 MODERN LIFE IN LONDON ; OR, “TOM AND JERRY” BACK AGAIN.

It was becoming sloio in. The Shades, as Coiiintbian Tom
observed to bis Coz Jerby Hawthorn, Esft., and be proposed a
visit to the Upper World, a lounge through the town, a saunter
through the scenes of their old sprees, and, in faet, a visit once more
to the ne plus ultra of “ Liee in Loneoh.” Jerry eagerly assented,
r'or the Conversation of the Immortals was not equal to that of the
Metropolitan Heroes of Literary Renown, and the Swan op Avon’s
habit of reciting his own plays at all times and seasons, made Jerry
long for the Peep o' day boys, wbile the Oxonian had suflered so
from Hamlet, declaimed after the un-swlrving manner of a famous
■actor, that he did not scruple to declare that the Bard was a
Literary Crlpple. Tom’s meridian, as we know, was the Beau
Monde, and he longed to be “at it again,” while his airy manner
had made him a great favourite with King Pluto. Indeed, his
sable Majesty had been heard to declare, “ 'pon honour," that were
he not Monarch of the Shades, he would be Corinthian Tom. Thus
it was that the Corinthian had no difficulty in obtaining leave of
absence for himself and Jerry from the Tartarean Tyrant, and the
Oxonian could have accompauied tbem too, but he shook his specs
and laughingly declined. “ Ko, my dear Tom,” said Logic, “ I have
beenin the Fields of Te?nptationheiore, and preferthe Flysian fields,
so I will remain here : but I have a son, a gay spark, now “ on the
tour," who, tbey say, is very like hisfather, a real “ Bit of Blood.”
Seek him out, for you will find the truth of Tempora Mutantur, and
he will prevent you being blown up at “ Point No?iplus." “We
ehall indeed be glad to meet young Bob,” said the Corinthian,
“ and if, as I suspect, he belongs to the Tribe of Fops, he will
be very useful to us in our en passant view of the new Life in
London. So accompany me, Jerry, or we shall be too late for the
Stygian Coach, which is to start immediately from “ The Shades.”

Old Bob Logic saw our heroes off, and they promised to “ tip him
the wink ” as to what went on in the upper world. As the coaeh
whirled them along, the Corinthian called Jerry’s attention to
•Charo?i the Coachee, who appeared to be a queer card." “ He was,”
said Tom, however,“ a first-rate whip; ” and as he tooled alo?ig he
laughed at Lucy, sighed at Sarah, ogled Olivta, and captivated
Charlotte like one of the “ G-ood Old School.” They changed
horses and coacbes on the borders of the Elysian Fields, and having

tipped Old Coachee, went away at a spanking pace in the direction
of the Metropolis. Tom and Jerry enjoyed their ride, though, as
Tom remarked, he would not give much for the “ prads ” at Tat-
tersall’s, while the freedo?n of some of their companions made the
Corinthian state his opinion that the coves were evidently on the
“ look-out," and they had better beware of flue-fakers. When a
modest tavern,' which was now called an Hotel, invited them to
alight, Old Boniface came out, and the Corinthian immediately
ordered dinner and the fine old wines of the House. Mine Host
replied, that he had orders from Mr. Robert Logic of the Albany to
have “ lunch ready,” and he offered anchovy sandwiches and a
magnwn of Mumm’s Champagne. “ How is this, Old Boni-
faee F ” cried the Corinthian. But the Tavern-Keeper said that
was the wine IHs Royal Highness the Prince of Wales drank, and
the tip-top fashionables would have no other; so Tom and Jerry
partook of it, the Corinthian saying to his Coz that Bonifaee knew
his business, and that if Master Bob’s manners were as good as his
wine, it was evident he was a “ gay party,” and a worthy son of his
comical SlRE.

Thus the Corinthian and his Coz Jerry Hawthorn journeyed
to town, and at certain stages Tom prevailed upon Jerry to
“ handle the ribbons,” which tbe Young Squire did with great dex-
terity, not forgetting, in true Coachee fashion, to bestow a wink on
the fascinating fair ones on the road. The Corinthian too had
some conversation with one of the “ Knowing Ones ” near him, as to
what London was now like, what was to be “ seen there" to get rid
of ennui, for, as he said, “ a little mirth in this melancholy life is
a good thing." “ Well,” said the stranger, who was rather a flashy
Cove, “ we have had a little fighting lately, though the Bobbies are
down on us precio?is hard, still we manage to get up a Mill now and
then.” “ Do you bear that, Jerry P ” said Tom, “ it is evident we
have returned to the Metropolis at an opportune time ; you remember
our visit to Cribb the Champion, and the set-to at Mr. Jackson’s
rooms, I shall be curious to see who now patronises the Noble
Ajt of Self-Defenee! “ It is evident,” said the Corinthian, “ that
rich scenes are awaiting us, though the primest touches of Life IN
London may not be here. But times have changed, as the Oxonian
would remark, and we must be on the qui vive. At all events, my
dear Jerry, we shall observe character and nature, and, as Boniface
remarked, Mumm ’s the word.”

The following is from the Ti??ies:—

NORTH ITALY.—To be Sold, an ancient CASTLE, charmingly
situate, with or without Farm and Vineyards of 40 acres. Purchaser
can have the title of Baron. For full particulars, apply, &c.

This is better than dancing attendance on an ungrateful Minister.

There has been a collision between the people and the military in
Barcelona, but the “ authorities ” have triumphed very rapidly. A
few nuts cracked, more or less, in that neighbourhood, have no
disturbing infiuence.

Mr. Parched Pea to move a resolution applying tbe Cloture to
Theatres, so that two-thirds of an audience, dissatisfied with a play
or a performance, can ring down the curtain.