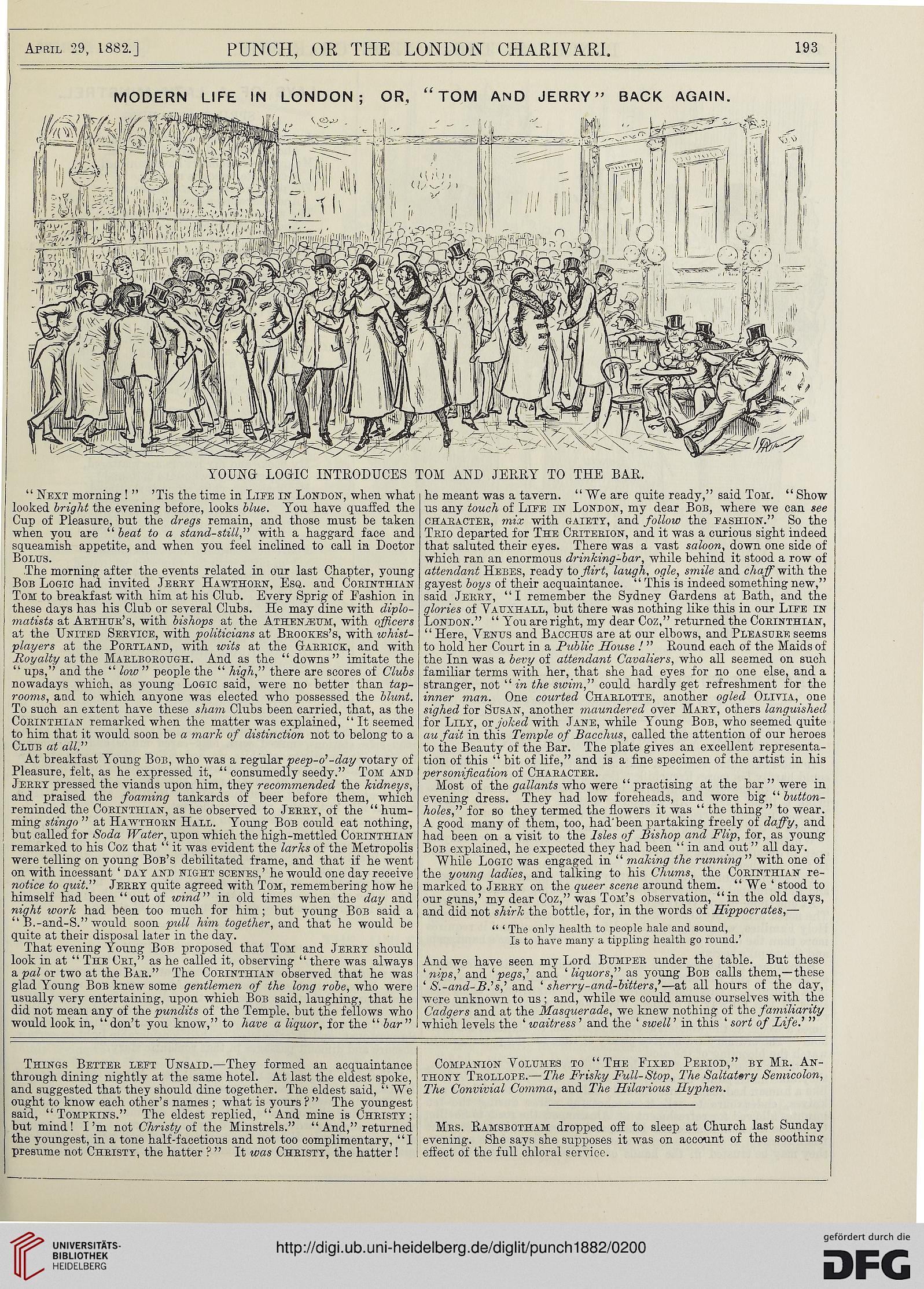 Information about OCR text
YOUNGr LOOIC INTRODUCES TOM AND JERRY TO THE BAR.

“ Next morning ! ” ’Tis the time in Life in Lon'don', when what
looked bright the evening before, looks blue. You have quaffed the
Cup of Pleasure, but the dregs remain, and those must be taken
when you are “ beat to a stand-still” with a haggard face and
squeamish appetite, and when you feel inclined to call in Doctor
! Boltjs.

The morning after the events related in our last Chapter, young
) Bob Logic had invited Jerry Hawthorn, Esq. and Corinthian
Toh to hreakfast with him at his Club. Every Sprig of Eashion in
these days has his Club or several Clubs. He may dine with diplo-
matists at Arthur’s, with bishops at the Athenqetjh, with officers
at the United Service, with politicians at Brookes’s, with whist-
players at the Portland, with wits at the Uabrick, and with
Royalty at the Marlborough. And as the “downs” imitate the
“ ups,” and the “ low ” people the “ high,” there are scores of Clubs
nowadays which, as young Logic said, were no better than tap-
rooms, and to which anyone was elected who possessed the blunt.
To such an extent have these sham Clubs been carried, that, as the
Corinthian remarked when the matter was explained, “ It seemed
to him that it would soon be a mark of distinction not to belong to a
Club at all.”

At hreakfast Young Bob, who was a regular peep-o'-day votary of
Pleasure, felt, as he expressed it, “ consumedly seedy.” Tom and
Jerry pressed the viands upon him, they recommended the kidneys,
and praised the foaming tankards of beer before them, which
reminded the Corinthian, as he observed to Jerry, of the “ hum-
ming stingo ” at Hawthorn Hall. Young Bob could eat nothing,
but called for Soda Water, upon which the high-mettled Corinthian
remarked to his Coz that “ it was evident the larks of the Metropolis
were telling on young Bob’s debilitated frame, and that if he went
on with incessant ‘ day and night scenes,’ he would one day receive
notice to quit.” Jerry quite agreed with Toir, remembering how he
himself nad been “ out of wind ” in old times when the day and
night work had been too much for him ; but young Bob said a
“ B.-and-S.” would soon pull him together, and that he would he
quite at their disposal later in the day.

That evening Young Bob proposed. that Toh and Jerry should
look in at “ Thk Cri,” as he called it, observing “ there was always
a pal or two at the Bar.” The Corinthian observed that he was
glad Young Bob knew some gentlemen of the long robe, who were
usually very entertaining, upon which Bob said, laughing, that he
did not mean any of the pundits of the Temple, but the fellows who
would look in, “don’t you know,” to have a liquor, for the “ bar”

he meant was a tavern. “ We are quite ready,” said Tom. “ Show
us any touch of Life in London, my dear Bob, where we can see
character, mix with gaiety, and follow the eashion.” So the
Trio departed for The Criterion, and it was a curious sight indeed
that saluted their eyes. There was a vast saloon, down one side of
which ran an enormous drinking-bar, while behind it stood a row of
attendant Hebes, ready to flirt, laugh, ogle, smile and cliaff with the
gayest boys of their acquaintance. “ This is indeed something new,”
said Jerry, “I remember the Sydney Gardens at Bath, and the
glories of Yauxhall, but there was nothing like this in our Liee in
London.” “ You are right, my dear Coz,” returned the Corinthian,
“ Here, Venus and Bacchus are at our elbows, and Pleasure seems
to hold her Court in a Public House ! ” Itound each of the Maids of
the Inn was a bevy of attendant Cavaliers, who all seemed on such
familiar terms with her, that she had eyes for no one else, and a
stranger, not “m the swim,” could hardly get refreshment for the
inner man. One courted Charlotte, another ogled Olivta, one
sighed for Susan, another maundered over Mary, others languished
for Lily, or joked with Jane, while Young Bob, who seemed quite
aufait in this Temple of Bacchus, called the attention of our heroes
to the Beauty of the Bar. The plate gives an excellent representa-
tion of this “ bit of life,” and is a fine specimen of the artist in his
persotiiflcation of Character.

Most of the gallants who were “ practising at the bar ” were in
evening dress. They had low foreheads, and wore hig “ button-
holes,” for so they termed the flowers it was “ the thing ” to wear.
A good many of them, too, had'been partaking freely of daffy, and
had been on a visit to the Isles of Bishop and Flip, for, as young
Bob explained, he expected they had been “ in and out ” all day.

While Logic was engaged in “ making the running ” with one of
the young ladies, and talking to his Chums, the Corinthian re-
marked to Jerry on the queer scene around them. “ We ‘ stood to
our guns,’ my dear Coz,” was Tom’s ohservation, “in the old days,
and did not shirk the bottle, for, in the words of Hippocrates,—

“ ‘ The only health to people hale and sound,

Is to have many a tippling health go round.’

And we have seen my Lord Bumper under the table. But these
‘ nips,\ and ‘ pegs,’’ and. ‘ liquors,” as young Bob calls them,—these
1 S.-and-B.’s,’ and ‘ sherry-and-bitters'—at all hours of the day,
were unknown to us ; and, while we could amuse ourselves with the
Cadgers and at the Masquerade, we knew nothing of the familiarity
whieh levels the ‘ waitress ’ and the ‘ swell ’ in this ‘ sort of Lifed ”

Thtngs Better left Unsaid.—They formed an acquaintance
through dining nightly at the same hotel. At last the eldest spoke,
and suggested that they should dine together. The eldest said, “We
ought to know each other’s names ; what is yours ?” The youngest
said, “ Tompkins.” The eldest replied, “ And mine is Christy ;
hut mind! I’m not Christy of the Minstrels.” “ And,” returned
the youngest, in a tone half-facetious and not too complimentary, ‘ ‘ I
presume not Christy, the hatter ? ” It was Christy, the hatter!

Companion Yolumes to “The Fixed Period,” by Mr. An-
thony Trollope.—The Frisky Full-Stop, The Saltatery Semicolon,
The Convivial Comma, and The Hilarious FLyphen.

Mrs. Ramsbotham dropped off to sleep at Church last Sunday
evening. She says she supposes it was on account of the soothing
effect of the full chloral service.