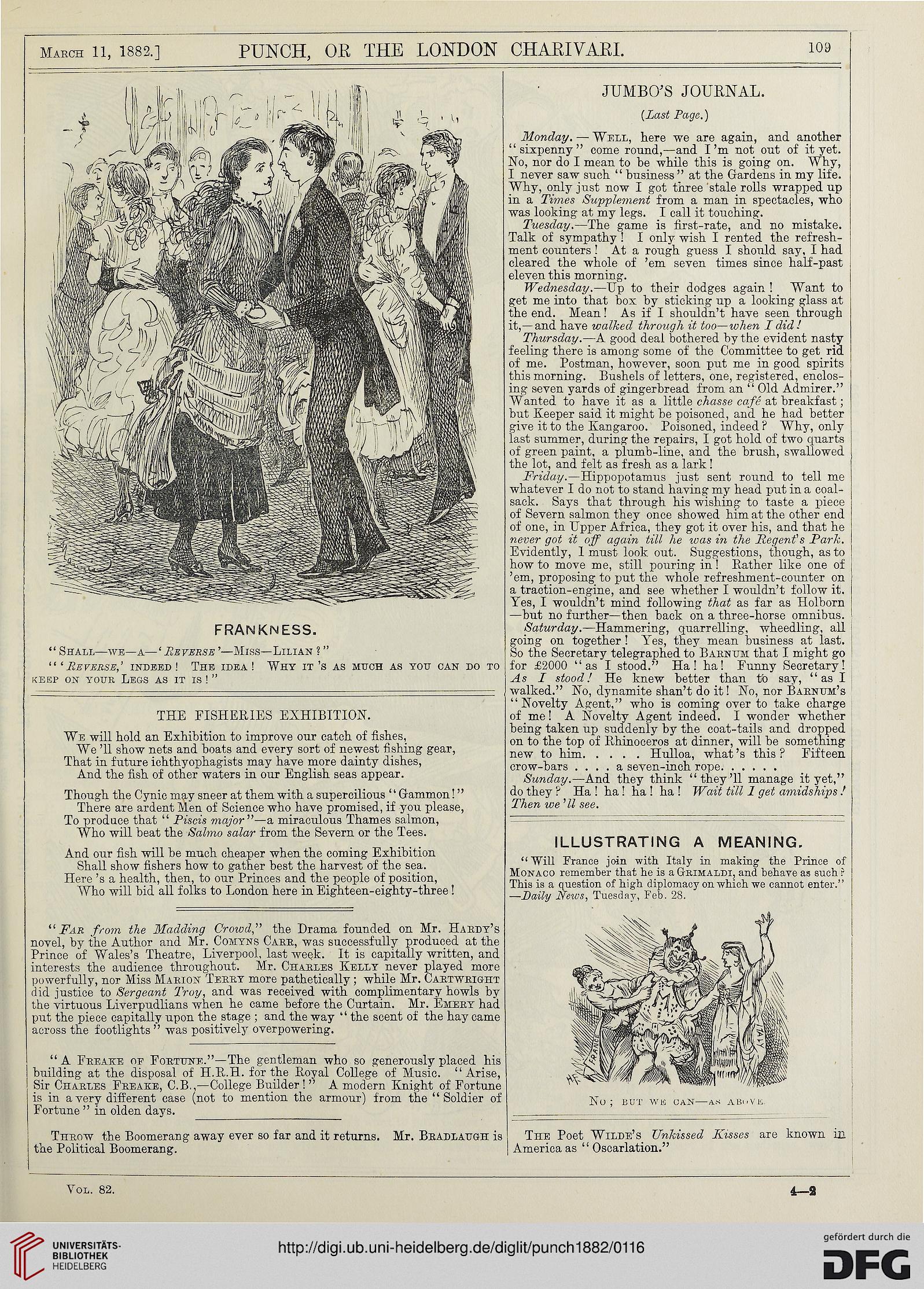 We will hold. an Exhibition to improve onr cateh of fishes,

We ’ll show nets and. boats and every sort of newest fishing gear,

And the fish of other waters in our English seas appear.

Though the Cynic may sneer at them with a supereilious “ Gammon! ”
There are ardent Men of Science who have promised, if you please,

To produce that “ Piscis major”—a miraculous Thames salmon,
Who will beat the Salmo salar from the Severn or the Tees.

And our fish will he much cheaper when the coming Exhibition
Shall show fishers how to gather best the harvest of the sea.

Here ’s a health, then, to our Princes and the people of position,
Who will bid all folks to London here in Eighteen-eighty-three!

“ Far from the Madding Croivd,” the Drama founded on Mr. Hardy’s
novel, by the Author and Mr. Comyns Cakr, was successfully produced at the
Prince of Wales’s Theatre, Liverpool, last week. It is capitally written, and
interests the audienee throughout. Mr. Charles Kelly never played more
powerfully, nor Miss Marion Terry more pathetically ; while Mr. Cartwrigitt
did justice to Sergeant Troy, and was received with complimentary howls by
the virtuous Liverpudlians when he came before the Curtain. Mr. Emery had.
put the piece capitally upon the stage ; and the way “ the scent of the hay came
across the footlights” was positively overpowering.

“ A Ereake of Forttjnf,.”—The gentleman who so generously placed his
building at the disposal of H.B..H. for the Koyal College of Music. “ Arise,

Sir Charles Freake, C.B.,—College Builder!” A modern Knight of Fortune
is in a very different case (not to mention the armour) from the “ Soldier of
Fortune ” in olden days.

Throw the Boomerang away ever so far and it returns. Mr. Bradlaijgh is The Poet Wilde’s Unkissed Kisses are known in.
the Political Boomerang. | America as “ Oscarlation.”

Monday. — Well, here we are again, and another

I never saw such “ business ” at the Gardens in my life.
Why, only just now I got three 'stale rolls wrapped up
in a Times Supplement from a man in spectacles, who
was looking at my legs. I call it touching.

Tuesday.—The game is first-rate, and no mistake.
Talk of sympathy ! I only wish I rented the refresh-
ment counters ! At a rough guess I should say, I had
cleared the whole of ’em seven times since half-past
eleven this morning.

Wednesday.—Up to their dodges again ! Want to
get me into that box by sticking up a looking glass at
the end. Mean! As if I shouldn’t have seen through
it,—and have walked through it too—when I did!

Thursday.—A good deal bothered by the evident nasty
feeling there is among some of the Committee to get rid
of me. Postman, however, soon put me in good spirits
this morning. Bushels of letters, one, registered, enclos-
ing seven yards of gingerbread from an “ Old Admirer.”
Wanted to have it as a little chasse cafe at breakfast;
but Keeper said it might be poisoned, and he had better
give it to the Kangaroo. Poisoned, indeed ? Why, only
last summer, during the repairs, I got hold of two quarts
of green paint, a plumb-line, and the brush, swallowed
the lot, and felt as fresh as a lark!

Friday.—Hippopotamus just sent round to tell me
whatever I do not to stand having my head put in a coal-
sack. Says that through his wishing to taste a piece
of Severn salmon they once showed him at the other end
of one, in Upper Africa, they got it over his, and that he
never got it off again till he was in the Regent's Park.
Evidently, 1 must look out. Suggest.ions, though, as to
how to move me, still pouring in ! Rather like one of
’em, proposing to put the whole refreshment-counter on
a traction-engine, and see whether I wouldn’t follow it.
Yes, I wouldn’t mind following that as far as Holborn
—but no further—then back on a three-horse omnibus.

Saturday.—Hammering, quarrelling, wheedling, all
going on together ! Yes, they mean business at last.
So the Secretary telegraphed to Barnum that I might go
for £2000 “ as I stood.” Ha! ha! Funny Secretary!
As I stood! He knew better than tb say, “ as I
walked.” Xo, dynamite shan’t do it! Xo, nor Barnum’s
“ Novelty Agent,” who is coming over to take charge
of me! A Novelty Agent indeed. I wonder whether
being taken up suddenly by the coat-tails and dropped
on to the top of Rhinoceros at dinner, will be something

new to him.Hulloa, what ’s this ? Fifteen

“ Will France join with Italy in mabing the Prince of
Monaco remember that he is a Grimaldi, and behave as such ?
This is a question of high diplomacy on which we cannot enter.”
—Laily Neivs, Tuesday, Feb. 28.