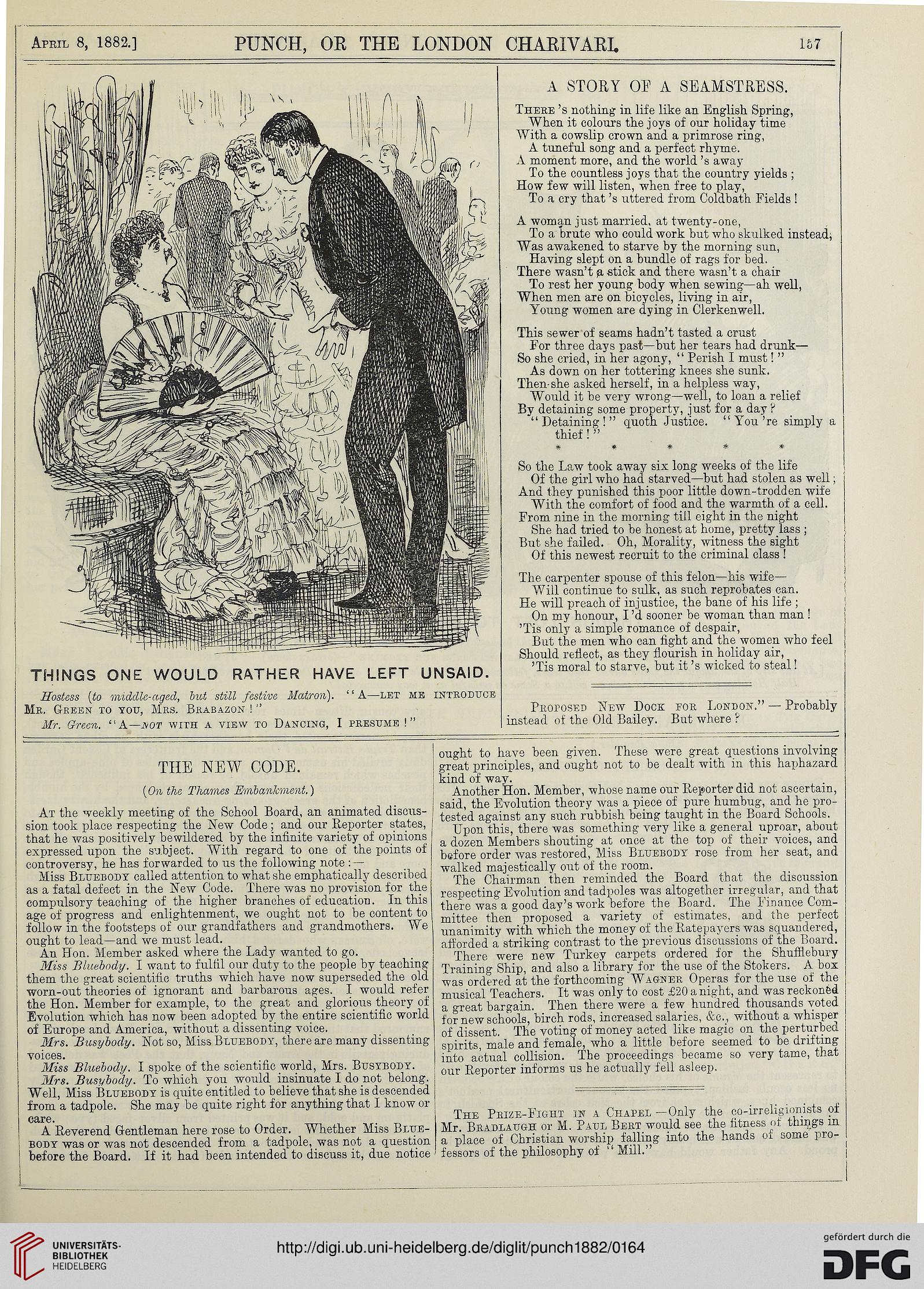 Information about OCR text
Arp.iL 8, 1882.] PUNCH, OR THE LONDON CHARIVARL U7

A STORY OF A SEAMSTRESS.

When it coloui’s the joys of our holiday time
With a cowslip crown and a primrose ring,

A tuneful song and a perfect rhyme.

A moment more, and the world ’s away
To the countless joys that the country yields ;

How few will listen, when free to play,

To a cry that ’s uttered. from Coldbath Fields !

A woman just married, at twenty-one,

To a brute who could work but who skulked instead,
Was awakened to starve by the morning sun,

Having slept on a bundle of rags for bed.

There wasn’t p, stick and there wasn’t a chair
To rest her young body when sewing—ah well,

When men are on bicycles, living in air,

Young women are dying in Clerkenwell.

As down on her tottering knees she sunk.

Then she asked herself, in a helpless way,

Would it be very wrong—well, to loan a relief
By detaining some property, just for a day ?

So the Law took away six long weeks of the life
Of the girl who had starved—but had stolen as well; j
And they punished this poor little down-trodden wife j
With the comfort of food and the warmth of a cell. j
From nine in the morning tiil eight in the night
She had tried to be honest at home, pretty lass ;

But she failed. Oh, Morality, witness the sight
Of this newest recruit to the criminal class !

The carpenter spouse of this felon—his wife—

Will continue to sulk, as such reprobates can.

He will preach of injustiee, the bane of his life ;

On my honour, I ’d sooner be woman than man !

’Tis only a simple romance of despair,

But the men who can fight and the women who feel j
Should reilect, as they flourish in holiday air,

’Tis moral to starve, but it ’s wicked to steal!

Proposed Yew Dock for London.
instead of the Old Bailey. But where ?

At the weekly meeting of the School Board, an animated discus-
sion took place respecting the Yew Code; and our Reporter states,
that he was positively bewildered by the infinite variety of opinions
expressed upon the subject. With regard to one of the points of
controversy, he has forwarded to us the following note : —

Miss Bltjebody called attention to what she emphatically described
as a fatal defect in the New Code. There was no provision for the
compulsory teaching of the higher branches of education. In this
age of progress and enlightenment, we ought not to be content to
follow in the footsteps of our grandfathers aud grandmothers. We
ought to lead—and we must lead.

An Hon. Member asked where the Lady wanted to go.

Miss Bluebody. I want to fultil our duty to the people by teaching
them the great scientific truths which have now superseded the old
worn-out theories of ignorant and barbarous ages. I would refer
the Hon. Member for example, to the great and glorious theory of
Evolution whieh has now been adopted by the entire scientific world
of Europe and America, without a dissenting voice.
i Mrs. Busybody. Not so, Miss Bltjebody, there are many dissenting
I voices.

i Miss Bluebody. I spoke of the scientihc world, Mrs. Busybody.

Mrs. Busybody. To which you would insinuate I do not belong.
Well, Miss Bluebody is quite entitled to believe that she is descended
j from a tadpole. She may be quite right for anything that I know or
| care.

A Reverend Gentleman here rose to Order. Whether Miss Blue-
body was or was not descended from a tadpole, was not a question
before the Board. If it had been intended to discuss it, due notice '

ought to have been given. These were great questions involving
great principles, and ought not to be dealt with in this haphazard
kind of way.

Another Hon. Member, whose name our Reporter did not ascertain,
said, the Evolution theory Avas a piece of pure humbug, and he pro-
tested against any such rubbish being taught in the Board Schools.

Upon this, there was something very like a general uproar, about
a dozen Members shouting at once at the top of their voices, and
before order was restored, Miss Bluebody rose from her seat, and
walked majestically out of the room.

The Chairman then reminded the Board that the discussion
respecting Evolution and tadpoles was altogether irregular, and that
there was a good day’s work before the Board. The Finance Com-
mittee t-hen proposed a variety of estimates, and the perfect
unanimity with which the money of the Ratepayers was squandered,
afforded a striking contrast to the previous discussions of the Board.

There were new Turkey carpets ordered for the Shuftiebury
Training Ship, and also a library for the use of the Stokers. A box
was ordered at the forthcoming’WAGNER Operas for the use of t-he
musical Teachers. It was only to cost £20 a night, and was reckonfed
a great bargain. Then there were a few hundred t-housands yoted
for new schools, birch rods, increased salaries, &c., without a whisper
of dissent. The voting of money acted like magic on the perturbed
spirits, male and female, who a litt-le before seemed to be drifting
into actual collision. The proceedings became so very tame, t-hat
our Reporter informs us he actually fell asleep.

The Prize-Fight in a Chapel — Only the co-irreligionists of
Mr. Bradlaugh or M. Paul Bert would see the titness of thirjgs m
a place of Christian worship falling into the hands of some pro-
fessors of the philosophy of “ Mill.”