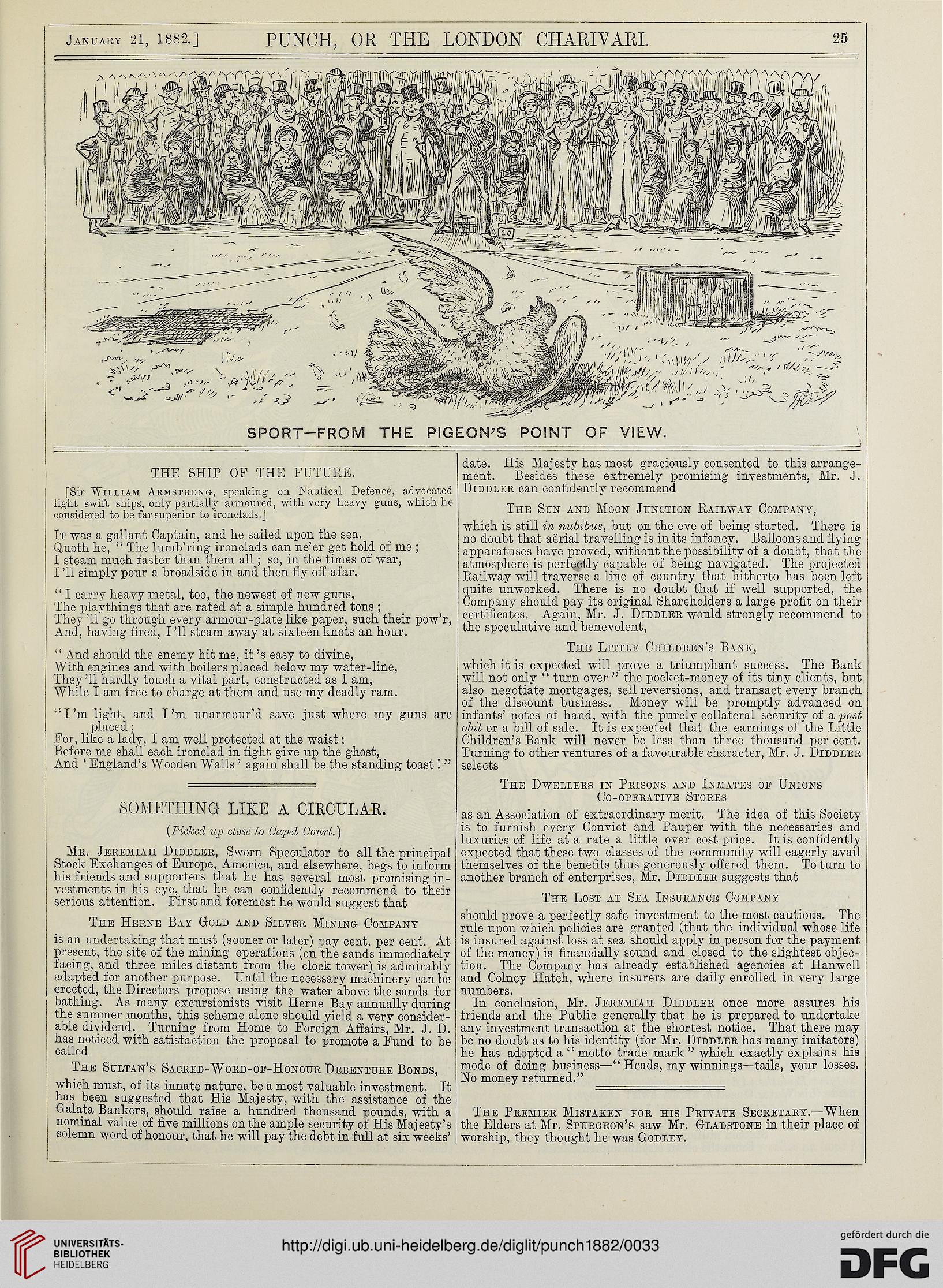 PUNCH, OR THE LONDON CHARIYARI.

SPORT-FROM THE PIGEON’S POINT OF VIEW.

THE SHIP OF THE FUTUKE.

It was a gallant Captain, and he sailed upon the sea.

Quoth he, “ The lumb’ring ironclads can ne’er get hold of me ;

I steam much faster than them all; so, in the times of war,

I ’ll simply pour a broadside in and then fiy olf afar.

“I carry heavy metal, too, the newest of new guns,

The playthings that are rated at a simple hundred tons ;

They ’ll go through every armour-plate like paper, such their pow’r,
And, having fired, I ’ll steam away at sixteen knots an hour.

“ And should the enemy hit me, it ’s easy to divine,

With engines and with boilers placed below my water-line,

They ’ll hardly touch a vital part, constructed as I am,

While I am free to charge at them and use my deadly ram.

“I’m light. and I’m unarmour’d save just where my guns are
placed;

For, like a ladv, I am well protected at the waist;

Before me shall each ironclad in fight give up the ghost,

And 4 England’s Wooden Walls ’ again shall be the standing toast! ”

(Picked up close to Capel Court.)

Mr. Jeremiah Diddler, Sworn Speculator to all the principal
Stock Exchanges of Europe, America, and elsewhere, begs to inform
his friends and supporters that he has several most promising in-
vestments in his eye, that he can confidently recommend to their
serious attention. First and foremost he would suggest that

is an undertaking that must (sooner or later) pay eent. per cent. At
present, the site of the mining operations (on the sands immediately
facing, and three miles distant from the clock tower) is admirably
adapted for another purpose. Until the necessary machinery can be
erected, the Directors propose using the water above the sands for
bathing. As many excursionists visit Herne Bay annually during
the summer months, this scheme alone should yield a very consider-
able dividend. Turning from Home to Foreign Affairs, Mr. J. D.
has noticed with satisfaction the proposal to promote a Fund to be
called

which must, of its innate nature, be a most valuable investment. It
has been suggested that His Majesty, with the assistance of the
Galata Bankers, should raise a hundred thousand pounds, with a
nominal value of five millions onthe ample security of His Majesty’s
solemn word of honour, that he will pay the debt in full at six weeks’

date. His Majesty has most graciously consented to this arrange-
ment. Besides these extremely promising investments, Mr. J.
Diddler can confidently recommend.

which is still in nubibus, but on the eve of being started. There is
no doubt that aerial travelling is in its infancy. Balloons and fiying
apparatuses have proved, without the possibility of a doubt, that the
atmosphere is perfe„ctly capable of being navigated. The projected
Bailway will traverse a line of country that hitherto has been left
quite unworked. There is no doubt that if well supported, the
Company should pay its original Shareholders a large profit on their
certificates. Again, Mr. J. Diddler would strongly recommend to
the speculative and benevolent,

which it is expected will prove a triumphant success. The Bank
will not only “ turn over ” the pocket-money of its tiny clients, but
also negotiate mortgages, sell reversions, and transact every branch
of the discount business. Money will be promptly advanced on
infants’ notes of hand, with the purely collateral security of a post
obit or a bill of sale. It is expected that the earnings of the Little
Children’s Bank will never be less than three thousand per cent.
Turning to other ventures of a favourable character, Mr. J. Diddler
selects

The Dwellers in Prisons and Inmates of Unions
Co-operative Stores

as an Association of extraordinary merit. The idea of this Society
is to furnish every Convict and Pauper with the necessaries and
luxuries of life at a rate a little over cost price. It is confidently
expected that these two classes of the community will eagerly avail
themselves of the benefits thus generously offered them. To turn to
another branch of enterprises, Mr. Diddler suggests that

The Lost at Sea Insurance Company

should prove a perfectly safe investment to the most cautious. The
rule upon which policies are granted (that the individual whose life
is insured against loss at sea should apply in person for the payment
of the money) is financially sound and closed to the slightest objec-
tion. The Company has already established agencies at Hanwell
and Colney Hatch, where insurers are daily enrolled in very large
numbers.

In conclusion, Mr. Jeremiah Diddler once more assures his
friends and the Public generally that he is prepared to undertake
any investment transaction at the shortest notice. That there may
be no doubt as to his identity (for Mr. Diddler has many imitators)
he has adopted a “ motto trade mark ” which exactly explains his
mode of doing business—“Heads, my winnings—tails, your losses.
No money returned.”

The Premier Mistaken for his Private Secretary.—When
the Elders at Mr. Spurgeon’s saw Mr. Gladstone in their place of
worship, they thought he was Godley.