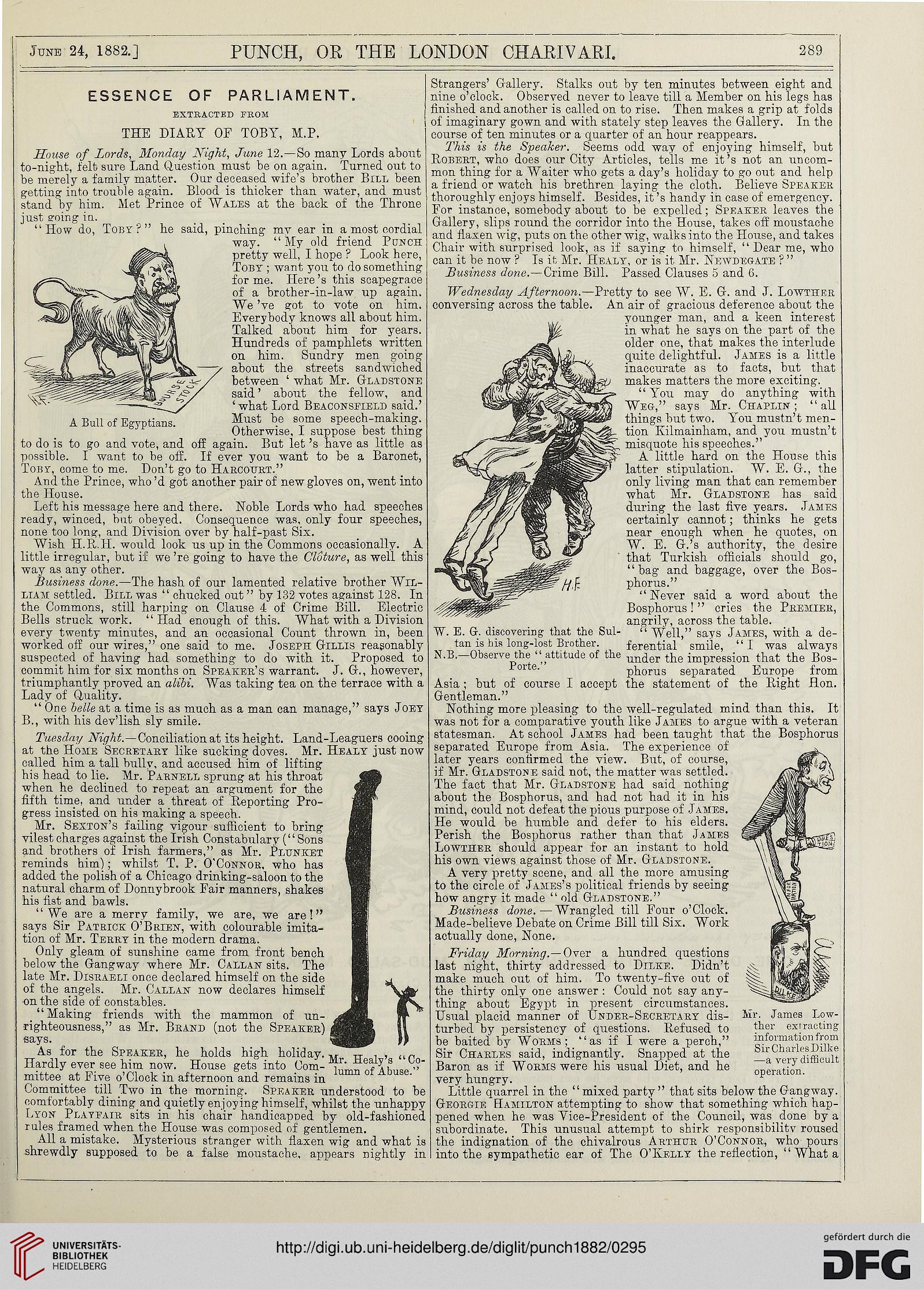 A Bull of Egyptians.

House of Lords, Monday Night, June 12.—So many Lords abont
to-night, felt sure Land Question must be on again. Turned out to
be merely a family matter. Our deceased wife’s brother Bill been
getting into trouble again. Blood is thicker than water, and must
stand by him. Met Prinee of Wales at the back of the Throne
just ffoing in.

“ How do, Tobx?” he said, pinching my ear in a most cordial

way. “ My old friend Punch
pretty well, I hope ? Look here,
Toby ; wa.nt you to do something
for me. Here’s this seapegrace
of a brother-in-law np again.
~We ’ve got to vote on him.
Everybody knows all about him.
Talked about him for years.
Hundreds of pamphlets written
on him. Sundry men going
abont the streets sandwiched
between ‘ what Mr. G-ladstone
said ’ about the fellow, and
‘what Lord Beaconseield said.’
Must be some speech-making.
Otherwise, I suppose best thing
to do is to go and vote, and ofi again. But let ’s have as little as
possible. I want to be otf. If ever you want to be a Baronet,
Toby, come to me. Don’t go to Harcottrt.”

And the Prince, who ’d got another pair of new gloyes on, went into
the ITouse.

Left his message here and there. Noble Lords who had speeches
ready, winced, but obeyed. Consequence was, only four speeches,
none too long, and Division over by half-past Six.

Wish H.R.TI. would look us up in the Commons occasionally. A
little irregular, but if we ’re going to have the Cloture, as well this
way as any other.

Business done.—The hash of our lamented relative brother Wil-
LiAivr settled. Bill was “ chucked out ” by 132 votes against 128. In
the Commons, still harping on Clause 4 of Crime Bill. Electric
Bells struck work. “ Had enough of this. What with a Division
every twenty minutes, and an occasional Count thrown in, been
worked off our wires,” one said to me. Joseph GtILLIS reagonably
suspected of having had something to do with it. Proposed to
commit him for six months on Speaker’s warrant. J. Gr., however,
triumphantly proved an alibi. Was taking tea on the terrace with a
Lady of Quality.

“ One belle at a time is as much as a man can manage,” says Joet
B., with his dev’lish sly smile.

Tuesday Night.—Conciliation at itsheight. Land-Leaguers cooing
at the Home Secretart like sucking doves. Mr. Healy just now
called him a tall bully, and accused him of lifting
his head to lie. Mr. Pabnell sprung at his throat
when he declined to repeat an argument for the
fifth time, and under a threat of Reporting Pro-
gress insisted on his making a speech.

_Mr. Sexton’s failing vigour sufficient to bring
vilest charges against the Irish Constabulary (“ Sons
and brothers of Irish farmers,” as Mr. Plunket
reminds him); whilst T. P. O'Connor, who has
added the polish of a Chicago drinking-saloon to the
natural charmof Donnybrook Fair manners, shakes
his fist and bawls.

“ We are a merry family, we are, we are! ”
says Sir Patrick O’Brien, with eolourable imita-
tion of Mr. Terry in the modern drama.

Onlv gleam of sunshine came from front bench
below the Gangway where Mr. Callan sits. The
late Mr. Disraeli once declared himself on the side
of the angels. Mr. Callan now declares himself
on the side of constables.

“Making friends with the mammon of un-
righteousness,” as Mr. Brand (not the Speaker)
says.

As^ for the Speaker, he_holds high holiday.

Hardly ever see him now.

mittee at Eive o’Clock in af'ternoon and remains in
Committee till Two in the morning. Speaker understood to be
comfortably dining and_ quietly enjoying himself, whilst the unhappy
Lyon Playeair sits in his chair handicapned by old-fashioned
rules framed when the House was composed of gentlemen.

All a mistake. Mysterious stranger with flaxen wig and what is
shrewdly supposed to be a false moustache, appears nightly in

House gets into Com-

Strangers’ Gfallery. Stalks out by ten minutes between eight and
nine o’clock. Observed never to leave till a Member on his legs has
finished and another is called on to rise. Then makes a grip at folds
of imaginary gown and with stately step leaves the Gallery. In the
course of ten minutes or a quarter of an hour reappears.

This is the Speaker. Seems odd way of enjoying himself, but
Robert, who does our City Articles, tells me it’s not an uncom-
mon thing for a Waiter who gets a day’s holiday to go out and help
a friend or watch his brethren laying the cloth. Believe Speaker
thoroughly enjoys himself. Besides, it ’s handy in case of emergency.
For instance, somebody about to be expelled; Speaker leaves the
Gallery, slips round the corridor into the House, takes off moustache
and flaxen wig, puts on the other wig, walks into the House, and takes
Chair with surprised look, as if saying to himself, “ Dear me, who
can it be now ? Is it Mr. Healy, or is it Mr. Newdegate ? ”

Wednesday Afternoon.—Pretty to see W. E. G. and J. Lowther
conversing across the table. An air of gracious deference about the

younger man, and a keen interest
in what he says on the part of tbe
older one, that makes the interlude
quite delightful. James is a little
inaccurate as to facts, but that
makes matters the more exciting.

“ You may do anything with
Weg,” says Mr. Chaplin ; “ all
things but two. You mustn’t men-
tion Kilmainham, and you mustn’t
misquote his speeches.”

A little hard on the House this
latter stipulation. W. E. G., the
only living man that can remember
what Mr. Gladstone has said
during the last five years. James
certainly cannot; thinks he gets
near enough when he quotes, on
W. E. G.’s authority, the desire
that Turkish officials should go,
“ bag and baggage, over the Bos-
phorus.”

“ Never said a word about the
Bosphorus ! ” cries the Premier,
angrily, across the table.

“ Well,” says James, with a de-
ferential smile, “I was always

W. E. G. discovering that the Sul-
tan is his long-lost Brother.

N.B. Observe the “ attitude of the un(jer the impression that the Bos-
” 0lte' phorus separated Europe from

Asia ; but of course I aceept the statement of the Right Hon.
Gentleman.”

Nothing more pleasing to the well-regulated mind than this. It
was not for a comparative youth like James to argue with a veteran
statesman. At school James had been taught that the Bosphorus
separated Europe from Asia. The experience of
later years contirmed the view. But, of course,
if Mr. Gladstone said not, the matter was settled.

The fact that Mr. Gladstone had said nothing
about the Bosphorus, and had not had it in his
mind, could not defeat the pious purpose of James.

He would be humble and defer to his elders.

Perish the Bosphorus rather than that James
Lowther should. appear for an instant to hold
his own views against those of Mr. Gladstone.

A very pretty scene, and all the more amusing
to the circle of James’s political friends by seeing
how angry it made “ old Gladstone.”

Friday Morning.—Over a hundred questions
last night, thirty addressed to Dilke. Didn’t
make much out of him. To twenty-five out of
the thirty only one answer : Could not say anv-
thing about "Egypt in present circumstances.

Usual placid manner of Under-Secretary dis-
turbed by persistency of questions. Refused to
be baited by Worms ; “as if I were a percb,”

Sir Charles said, indignantly. Snapped at the
Baron as if Worms were his usual Diet, and he
very hungry.

Little quarrel in the “ mixed party ” that sits below the Gangway.
Georgie Eamilton attempting to show that something which hap-
pened when he was Vice-President of the Council, was done by a
subordinate. This unusual attempt to shirk responsibilitv roused
the indignation of the chivalrous Arthur O'Connor, who pours
into the Bympathetic ear of The O’Iaelly the refiection, “ What a