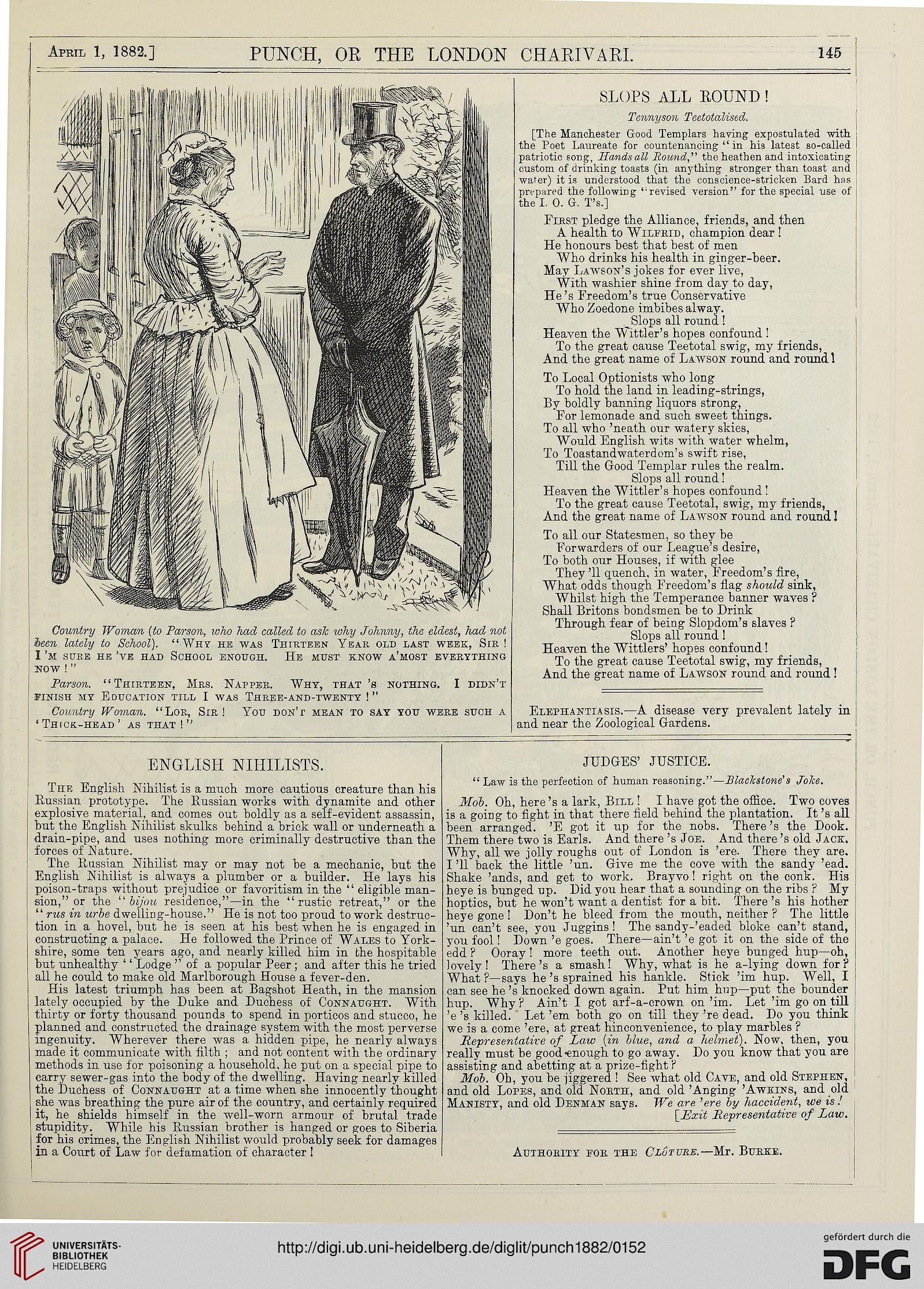 PUNOH, OR THE LONDON CHARIVARI.

Country Woman (to Parson, who had called to ask why Johnny, the eldest, had not
been lately to School). “Whv he was Thtrteen Year old last week, Sir !
I ’m sure he ’ve had School enough. He must know a’most everything
sow ! ”

Parson. “Thirteen, Mrs. Napper. Why, that ’s nothing. I didn’t
finish my Education till I was Three-and-twenty ! ”

Country Woman. “Lor, Sir ! You don’t mean to say you were such a

[The Manchester Grood Templars having expostulated with
the Poet Laureate for countenancing “ in his latest so-called
patriotic song, Ilandsall Itound," the heathen and intoxicating
custom of drinking toasts (in anything stronger than toast and
wafer) it is understood that the conscienee-stricken Bard has
prepared the following “revised version” for the special use of
the I. 0. G. T’s.]

Flrst pledge the Alliance, friends, and then
A health to Wilfrid, champion dear !

He honours hest that best of men
Who drinks his health in ginger-beer.

May Lawson’s jokes for ever live,

With washier shine from day to day,

To the great cause Teetotal swig, my friends,

And the great name of Lawson round and round 1

To Local Optionists who long
To hold the land in leading-strings,

For lemonade and such sweet things.

To all who ’neath our watery skies,

Would English wits with water whelm,

Till the Good Templar rules the realm.

To the great cause Teetotal, swig, my friends,

And the great name of Lawson round and round!

To all our Statesmen, so they be
Forwarders of our League’s desire,

To both our Houses, if with glee
They ’ll quench, in water, Freedom’s fire,

What odds though Freedom’s flag should sink,
Whilst high the Temperance banner waves ?

Shall Britons bondsmen be to Drink
Through fear of being Slopdom’s slaves ?

Slops all round I

To the great cause Teetotal swig, my friends,

And the great name of Lawson round and round !

Elephantiasis.—A disease very prevalent lately in
and near the Zoological Gardens.

The English Nihilist is a much more cautious creature than his
Russian prototype. The Russian works with dynamite and other
explosive material, and comes out boldly as a self-evident assassin,
hut the English Nihilist skulks behind a hrick wall or underneath a
drain-pipe, and uses nothing more criminally destructive than the
forces of Nature.

The Russian Nihilist may or may not be a mechanic, but the
English Nihilist is always a plumber or a builder. He lays his
poison-traps without prejudice or favoritism in the “ eligible man-
sion,” or the “ bijou residence,”—in the “ rustic retreat,” or the
“ rus in urhe dwelling-house.” He is not too proud to work destruc-
tion in a hovel, but he is seen at his hest when he is engaged in
constructing a palace. He followed the Prince of Wat.es to York-
shire, some ten years ago, and nearly killed him in the hospitable
hut unhealthy ‘ ‘ Lodge ” of a popuiar Peer ; and after this he tried
all he could to make old Marlborough House a fever-den.

His latest triumph has been at Bagshot Heath, in the mansion
lately occupied by the Duke and Duchess of Connaught. With
thirty or forty thousand pounds to spend in porticos and stucco, he
planned and constructed the drainage system with the most perverse
ingenuity. Wherever there was a hidden pipe, he nearly always
made it communicate with filth ; and not content with the ordinary
methods in use for poisoning a household, he put on a special pipe to
carry sewer-gas into the body of the dwelling. Having nearly killed
the Duchess of Connaught at a time when she innocently thought
she was breathing the pure air of the country, and certainly required
it, he shields himself in the well-worn armour of brutal trade
stupidity. While his Russian brother is hanged or goes to Siheria
for his crimes, the English Nihilist would prohably seek for damages
in a Court of Law for defamation of character!

“ Law is the perfection of human reasoning.”—Placlcstone's Joke.

Moh. Oh, here ’s a lark, Bill ! I have got the office. Two coves
is a going to fight in that there field hehind the plantation. It ’s all
been arranged. ’E got it up for the nohs. There ’s the Dook.
Them there two is Earls. And there ’s Joe. And there ’s old Jack.
Why, all we jolly roughs out of London is ’ere. There they are.
I ’ll back the little ’un. Give me the cove with the sandy ’ead.
Shake ’ands, and get to work. Brayvo! right on the conk. His
heye is bunged up. Did you hear that a sounding on the ribs ? My
hoptics, hut he won’t want a dentist for a bit. There ’s his hother
heye gone ! Don’t he bleed from the mouth, neither ? The little
’un can’t see, you Juggins ! The sandy-’eaded bloke can’t stand,
you fool! Down ’e goes. There—ain’t ’e got it on the side of the
edd ? Ooray ! more teeth out. Another heye bunged hup—oh,
lovely ! There ’s a smash! Why, what is he a-lying down for ?
What ?— says he ’s sprained his hankle. Stick ’im hup. Well, I
can see he ’s knocked down again. Put him hup—put the bounder
hup. Why ? Ain’t I got arf-a-crown on ’im. Let ’im go on till
’e ’s killed. Let ’em hoth go on till they ’re dead. Do you think
we is a come ’ere, at great hinconvenience, to play marbles ?

Hepresentative of Law [in hlue, and a hehnet). Now, then, you
really must he good *enough to go away. Do you know that you are
assisting and abetting at a prize-fight ?

Moh. Oh, you be jiggered ! See what old Cave, and old Stephen,
and old Loees, and old North, and old ’Anging ’Awrins, and oid
Manisty, and old Denman says. We are ’ere hy haccident, we is !