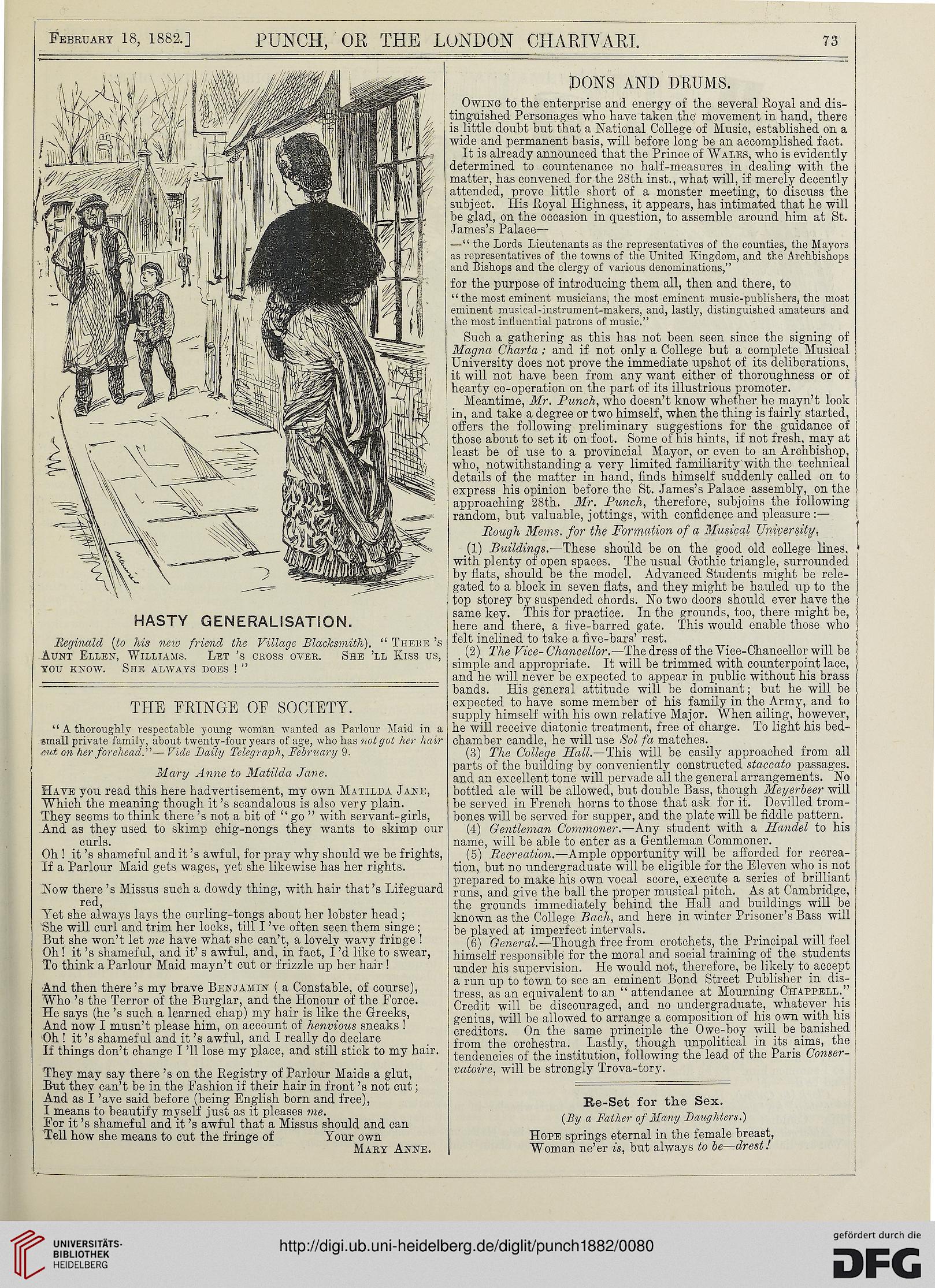 Information about OCR text
February 18, 1882.] PUNCH, OR THE LOND0N CIIARIVARI.

Have you read this liere hadvertisement, my own Matilda Jare,
Which the meaning thongh it ’s scandalous is also very plain.

They seems to think there ’s not a bit of “ go ” with servant-girls,
And as they used to skimp chig-nongs they wants to skimp our
curls.

Oh ! it ’s shameful and it ’s awful, for pray why should we be frights,
If a Parlour Maid gets wages, yet she likewise has her rights.

jSTow there ’s Missus such a dowdy thing, with hair that’s Lifeguard
red,

Yet she always lavs the curling-tongs ahout her lohster head;

'She will curl and trim her locks, till I ’ve often seen them singe;

But she won’t let me have what she can’t, a lovely wavy fringe !

Oh! it ’s shameful, and it’ s awful, and, in fact, I ’d like to swear,
To think a Parlour Maid mayn’t cut or frizzle up her hair !

And then there ’s my brave Ben.tamin ( a Constable, of course),
Who ’s the Terror of the Burglar, and the Honour of the Force.

He says (he ’s such a learned chap) my hair is like the Greeks,

And now I musn’t please him, on account of henvious sneaks !

Oh ! it ’s shamef ul and it ’s awful, and I really do declare
If things don’t change I ’ll lose my place, and still stick to my hair.

They may say there ’s on the Registry of Parlour Maids a glut,

But they can’t be in the Fashion if their hair in front ’s not cut;

And as I ’ave said before (being English born and free),

I means to beautify myself just as it pleases me.

Owing to the enterprise and energy of the several Royal and dis-
tinguished Personages who have taken the movement in hand, there
is little doubt but that a National College of Music, established on a
wide and permanent basis, will before long be an accomplished fact.

It is already announced that the Prince of Wales, who is evidently
determined to countenance no half-measures in dealing with the
matter, has convened for the 28th inst., what will, if merely decently
attended, prove little short of a monster meeting, to discuss the
subject. His Royal Highness, it appears, has intimated that he will
be glad, on the occasion in question, to assemble around him at St.
James’s Palace—

Such a gathering as this has not been seen since the signing of
Magna Charta; and if not only a College but a complete Musical
University does not prove the immediate upshot of its deliberations,
it will not have been from any want either of thoroughness or of
hearty co-operation on the part of its illustrious promoter.

Meantime, Mr. Punch, who doesn’t know whether he mayn’t look
in, and take a degree or two himself, when the thing is fairly started,

' offers the following preliminary suggestions for the guidance of
those about to set it on foot. Some of his hints, if not fresh, may at
| least be of use to a provincial Mayor, or even to an Arehbishop,
who, notwithstanding a very limited familiarity'with the technicai
details of the matter in hand, finds himself suddeniy called on to
express his opinion before the St. James’s Palace assembly, on the
approaching 28th. Mr. Punch, therefore, suhjoins the following
random, but valuable, jottings, with confidence and pleasure :—
JRough Mems. for the Formation of a Musical Uniyersity,

_(1) Buildings.—These should he on the good old college lines,
with plenty ox open spaces. The usual Gothic triangle, surrounded
i by flats, should be the model. Advanced Students might be rele-
gated to a block in seven flats, and they might be hauled up to the
top storey by suspended chords. No two doors should ever have the
same key. This for practice. In the grounds, too, there might be,
here and there, a five-barred gate. This would enable those who
felt inclined to take a five-bars’ rest.

(2) The Vice- Chancellor.—The dress of the Vice-Chancellor will be
simple and appropriate. It will be trimmed with counterpoint lace,
and he will never be expected to appear in public without his brass
bands. His general attitude will be dominant; but he will be
expected to have some member of his family in the Army, and to
supply himself with his own relative Major. When ailing, however,
he wiil receive diatonic treatment, free of charge. To light his bed-
chamber candle, he will use Sol fa matches.

(3) Tlie College Hall.—ThJs will be easily approached from all
parts of the building by conveniently constructed staccato passages.
and an excellent tone will pervade all the general arrangements. No
bottled ale will be allowed, but double Bass, though Meyerbeer wiil
be served in French horns to those that ask for it. Devilled trom-
bones will be served for supper, and the plate will be fiddle pattern.

(5) Pecreation.—Ample opportunity will be afforded for recrea-
tion, but no undergraduate willbe eligible for the Eleven who is not
prepared to make his own vocal score, execute a series of brilliant
runs, and give the ball the proper musical pitch. As at Cambridge,
the grounds immediately behind the Hall and buildings will be
known as the College Bach, and here in winter Prisoner’s Bass will
be played at imperfect intervals.

(6) General.— Though free from crotchets, the Principal will feel
himself responsible for tbe moral and social training of the students
under his supervision. He would not, therefore, be likely to accept
a run up to town to see an eminent Bond Street Publisher in dis-
tress, as an equivalent to an “ attendance at Mourning CnAPPELL.”
Credit will be discouraged, and no undergraduate, whatever his
genius, will be allowed to arrange a composition of his own with his
creditors. On the same principle the Owe-boy will be banished
from the orchestra. Lastly, though unpolitical in its aims, the
tendencies of the institution, following the lead of the Paris Conser-
vatoire, will be strongly Trova-tory.

Re-Set for the Sex.

(By a Father of Many Daughters.)

Hope springs eternal in the female breast,
Woman ne’er is, but always to be—drest!