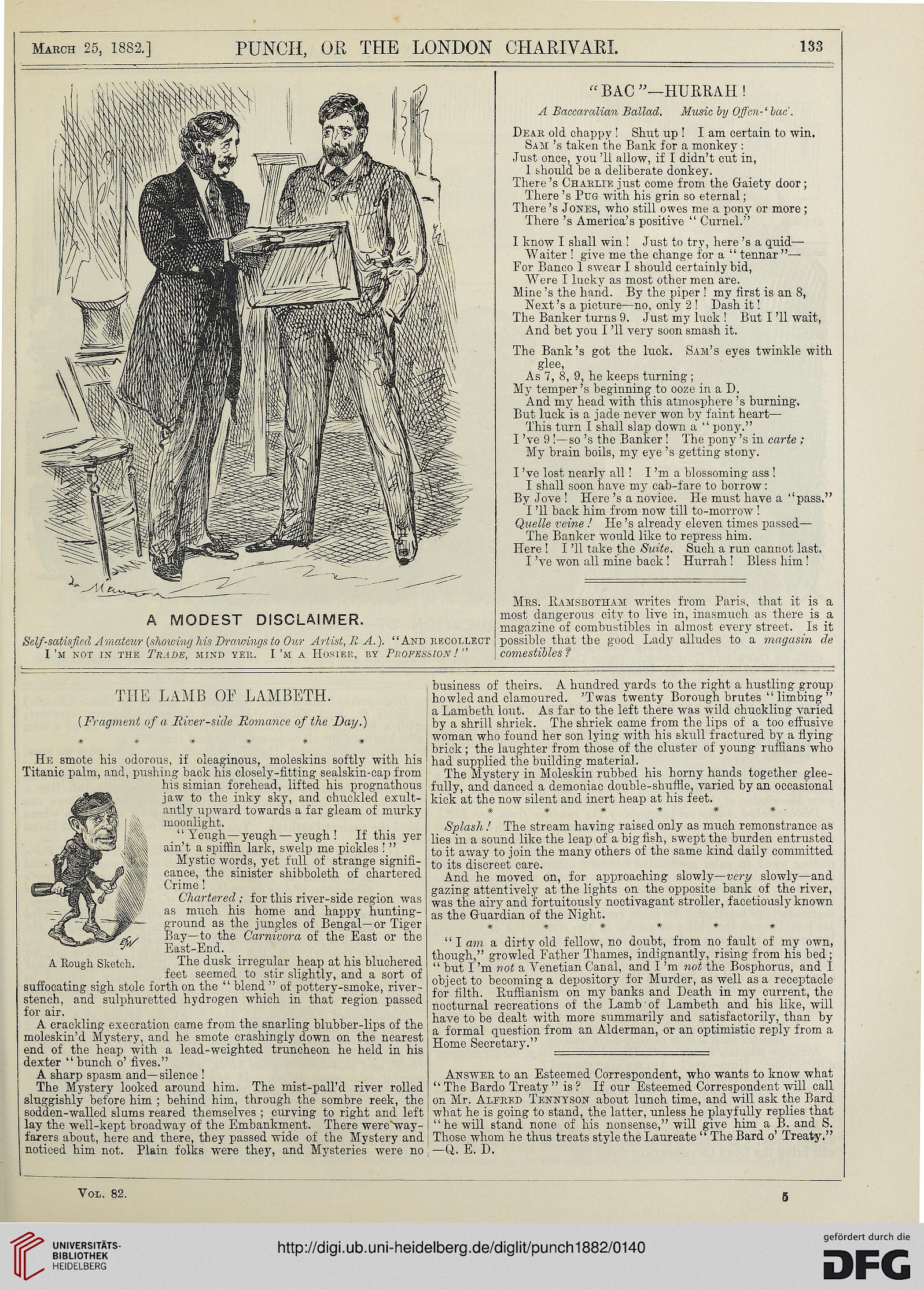 PUNCH, OR THE LONDON CHARIVARL

Self-satisfiecl Amateur (showing his Drctmngs to Our Artist, R A.). “ And recollect
I’m not in the Trade, mind YEll. I ’m a Hosier, by Profession! ”

Dear old chappy ! Shut up ! I am certain to win.

Sam ’s taken the Bank for a monkey :

I should be a deliberate donkey.

There ’s Charlie just come from the Graiety door;

There ’s Ptjg with his grin so eternal;

There ’s Jones, who still owes me a pony or more ;
There ’s America’s positiye “ Curnel.”

For Banco 1 swear I should certainly bid,

Were I lucky as most other men are.

The Bank’s got the luck. Sam’s eyes twinkle with
glee,

My temper ’s beginning to ooze in a D,

And my head with this atmosphere ’s burning.

But luck is a jade never won by faint heart—

This turn I shall slap down a “ pony.”

My brain boils, my eye ’s getting stony.

I shall soon have my cab-fare to borrow:

Quelle veine ! He ’s already eleven times passed—
The Banker would like to repress him.

Here ! I ’il take the Suite. Such a run cannot last.

I ’ve won all mine back! Hurrah! Bless him!

Mrs. liAMSBOTHAM writes from Paris, that it is a
most dangerous city to live in, inasmuch as there is a
magazine of combustibles in aimost every street. Is it
possible that the good Lady allndes to a magasin de
comestibles ?

He smote his odorous, if oleaginous, moleskins softly with his
Titanic palm, and, pushing back his closeiy-fitting sealskin-cap from
his simian forehead, lifted his prognathous
jaw to the inky sky, and chuckled exult-
antly upward towards a far gleam of murky
moonlight.

“ Yeugh—yeugh — yeugh ! If this yer
ain’t a spiffin lark, swelp me pickles ! ”
Mystic words, yet full of strange signifi-
cance, the sinister shibboleth of chartered
Crime !

Chartered ; for this river-side region was
as much his home and happy hunting-
ground as the jungles of Bengal—or Tiger
Bay—to the Carnivora of the East or the
East-End.

The dusk irregular heap at his bluchered
feet seemed to stir slightly, and a sort of
suffocating sigh stole forth on the “ blend ” of pottery-smoke, river-
stench, and sulphuretted hydrogen which in that region passed
for air.

A crackling execration came from the snarling blubber-lips of the
moleskin’d Mystery, and he smote crashingiy down on the nearest
end of the heap with a lead-weighted truncheon he held in his
dexter “bunch o’ fives.”

The Mystery looked around him. The mist-pall’d river rolled
slnggishly before him ; behind him, through the sombre reek, the
sodden-walled slums reared themselves ; curving to right and left
lay the well-kept broadway of the Embankment. There were'way-
farers about, here and there, they passed wide of the Mystery and
noticed him not. Plain folks were they, and Mysteries were no

business of theirs. A hundred yards to the right a hustling group
howled and elamoured. ’Twas twenty Borough brutes “ limbiug ”
a Lambeth lout. As f'ar to the left there was wild chuckling varied
by a shrill shriek. The shriek came from the lips of a too effusive
woman who found her son lying with his skull fractured by a flying
brick ; the laughter from those of the cluster of young ruffians who
had supplied the building material.

Splash ! The stream having raised only as much remonstrance as
lies in a sound like the leap of a big fish, swept the burden entrusted
to it away to join the many others of the same kind daily committed
to its discreet care.

And he moved on, for approaching slowly— very slowly—and
gazing attentively at the lights on the opposite bank of the river,
was the airy and fortuitously noctivagant stroller, facetiously known
as the Guardian of the Night.

‘ ‘ I am a dirty old fellow, no doubt, from no_ fault of my own,
though,” growled Father Thames, indignantly, rising from his bed ;
“ but I ’m not a Yenetian Canal, and I ’m not the Bosphorus, and I
objectto becoming a depository for Murder, as well as a receptacle
for filth. Ruffianism on my banks and Death in my current, the
nocturnal recreations of the La.mb of Lambeth and his like, will
have to be dealt with more summarily and satisfactorily, than by
a formal question from an Alderman, or an optimistic reply from a
Home Secretary.” _

Answer to an Esteemed Correspondent, who wants to know what
“The Bardo Treaty” isF If our Esteemed Correspondent will call
on Mr. Alfred Tennyson about lunch time, and will ask the Bard
wliat he is going to stand, the latter, unless he playfully replies t.hat
“hewill stand none of his nonsense,” will give him a B. and S.
Those whom he thus treats stylethe Laureate “ The Bard o’ Treaty.”
—Q. E. D.