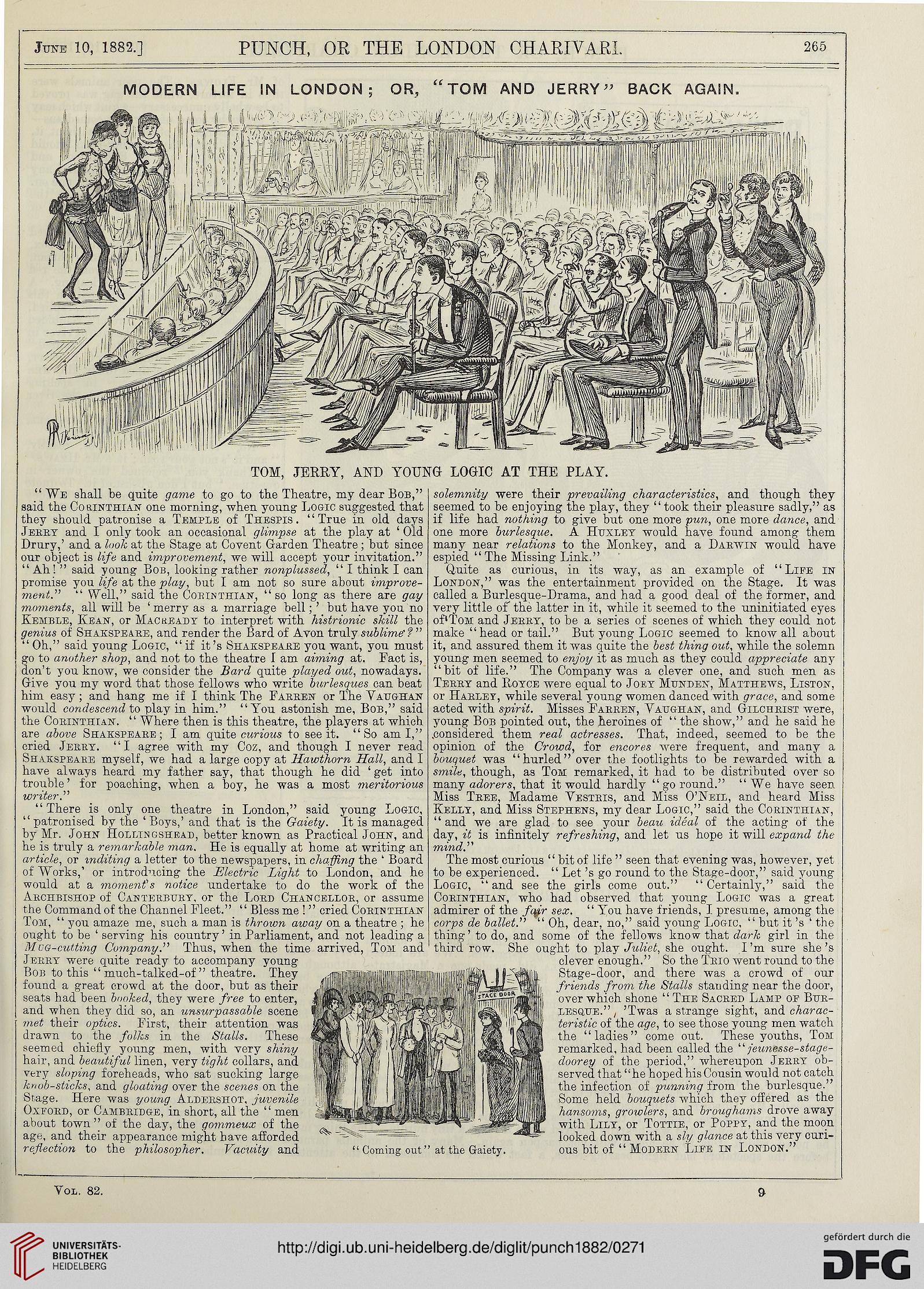 MODERN LIFE IN LONDON ; QR, “TOM AND JERRY” BACK AGAIN.

TOM, JERRY, AND YOUNO LOOIC AT THE PLAY.

“ We shall be quite game to go to the Theatre, rny dear Bob,”
said the CoaiNTHiAiir one morning, when young Logic suggested that
they should patronise a Temple of Thespis . “ True in old days
Jekby and I only took an oceasional glimpse at the plav at ‘ Old
Drury,’ and a look at the Stage at Covent Oarden Theatre; but since
our object is life and improvement, we will aceept your invitation.”
“ Ah! ” said young Bob, looking rather nonplussed, “ I think I can
promise you life at the play, but I am not so sure about improve-
ment.'” “ Well,” said the Cobinthian, “ so long as there are gay
moments, all will be ‘ merry as a marriage bell; ’ but have you no
Kemble, Kean, or Mackeady to interpret with histrionic skill the
genius of SiiAKSPEiRE, and render the Bard of Avon truly sublime' f ”
“ Oh,” said young Logic, “ if it’s Shakspeabe you want, you must
go to another shop, and not to the theatre I am aiming at. Fact is,
don’t you know, we consider the Bard quite played out, nowadays.
Give you my word that those fellows who write burlesques can beat
him easy ; and hang me if I think The Farren or The Vaughan
would condescend to play in him.” “You astonish me, Bob,” said
the Corinthian. “ Where then is this theatre, the players at which
are above Shakspeare ; I am quite curious to see it. “ So am I,”
cried Jerry. “I agree with my Coz, and though I never read
Shaxspeahe myself, we had a large copy at Hawthorn Hall, and I
have always heard my father say, that though he did ‘ get into
trouble ’ for poaching, when a hoy, he was a most meritorious
writer.”

“ There is only one theatre in London,” said young Logic,
“ patronised bv the ‘ Boys,’ and that is the Gaiety. It is managed
by Mr. John Hollingshead, better known as Practical John, and
he is truly a remarkable man. He is equally at home at writing an
article, or mditing a letter to the newspapers, in cliaffing the ‘ Board
of Works,’ or introducing the Electric Light to London, and he
would at a momenfs notice undertake to do the work of the
Archbishop of Canterbury, or the Lord Chancellor, or assume
the Command of the Channel Fleet.” “ Bless me ! ” cried Corinthian
Tom, “ you amaze me, such a man is thrown away on a theatre ; he
ought to be ‘ serving his country’ in Parliament, and not leading a
MuG-cutting Company.” Thus, when the time arrived, Tom and
Jerry were quite ready to accompany young
Bob to this “ much-talked-of ” theatre. They
found a great crowd at the door, but as their
seats had been bnoked, they were free to enter,
and when they did so, an unsurpassable scene
met their optics. First, their attention was
drawn to the folks in the Stalls. These
seemed chiefly young men, with very shiny
hair, and beautiful linen, very tight collars, and
very sloping foreheads, who sat sucking large
knob-sticks, and gloating over the scenes on the
Sr,age. Here was young Aldershot, juvenile
Oxford, or Cambridge, in short, all the “ men
about town] of the day, the gommeux of the
age, and their appearance might bave afiorded
reflection to the philosopher. Vacuity and

solemnity were their prevailing characteristics, and though they
seemed to be enjoying the play, they “ took their pleasure sadly,” as
if life had nothing to give but one more pun, one more dance, and
one more burlesque. A Huxley would have found among them
many near relations to the Monkey, and a Darwin would have
espied “ The Missing Link.”

Q.uite as curious, in its way, as an example of “ Life in
London,” was the entertainment provided on the Stage. It was
called a Burlesque-Drama, and had a good deal of the former, and
very little of’ the latter in it, while it seemed to the uninitiated eyes
of*ToM and Jerry, to be a series of scenes of which they could not
make “ head or tail.” But young Logic seemed to know all about
it, and assured them it was quite the best thing out, while the solemn
young men seemed to enjoy it as much as they could appreciate any
“bit of life.” The Company was a clever one, and such men as
Terry and Royce were equal to Joey Munden, Matthews, Liston,
or Harley, while several young women danced with grace, and some
acted with spirit. Misses Farren, Vaughan, and Gtlchrist were,
young Bob pointed out, the heroines of “ the show,” and he said he
.considered them real actresses. That, indeed, seemed to be the
opinion of the Crowd, for encores were frequent, and many a
bouquet was “hurled” over t.he footlights to be rewarded with a
smile, though, as Tom remarked, it had to be distributed over so
many adorers, that it would hardly “goround.” “ We have seen
Miss Tree, Madame Vestris, and Miss O’Neil, and heard Miss
Kelly, and Miss Stephens, my dear Logic,” said the Corinthian,
“ and we are glad to see your beau ideal of the acting of the
day, it is infinitely refreshing, and let us hope it will expand the
mind.”

The most curious “ bitof life ” seen that evening was, however, yet
to be experienced. “ Let ’s go round to the Stage-door,” said young
Logic, “ and see the girls come out.” “ Certainly,” said the
Corinthian, who had observed that young Logic was a great
admirer of the fcyr sex. “ You have friends, I presume, among the
corps de ballet.' 1'’ “ Oh, dear, no,” said young Logic, “ but it ’s ‘ the
thing’ to do, and some of the fellows know that dark girl in the
third row. She ought to play Juliet, she ought. I’m sure she’s
clever enough.” So the Trio went round to the
Stage-door, and there was a crowd of our
friends from the Stalls standing near the door,
over which shone “ The Sacred Lamp of Bur-
lesq,ue.” , ’Twas a strange sight, and charac-
teristic of the age, to see those young men watch
the “ladies” come out. These youths, Tom
remarked, had been called the “ jeunesse-stage-
doorey of the period,” whereupon Jerry ob-
served that “he hopeclhisCousin would not catch
the infection of punning from the burlesque.”
Some held bouquets which they offered as the
hansoms, growlers, and broughams drove away
with Lily, or Tottie, or Poppy, and the moon
looked down with a sly glance at this very curi-
ous bit of “ Modern Liee in London.”