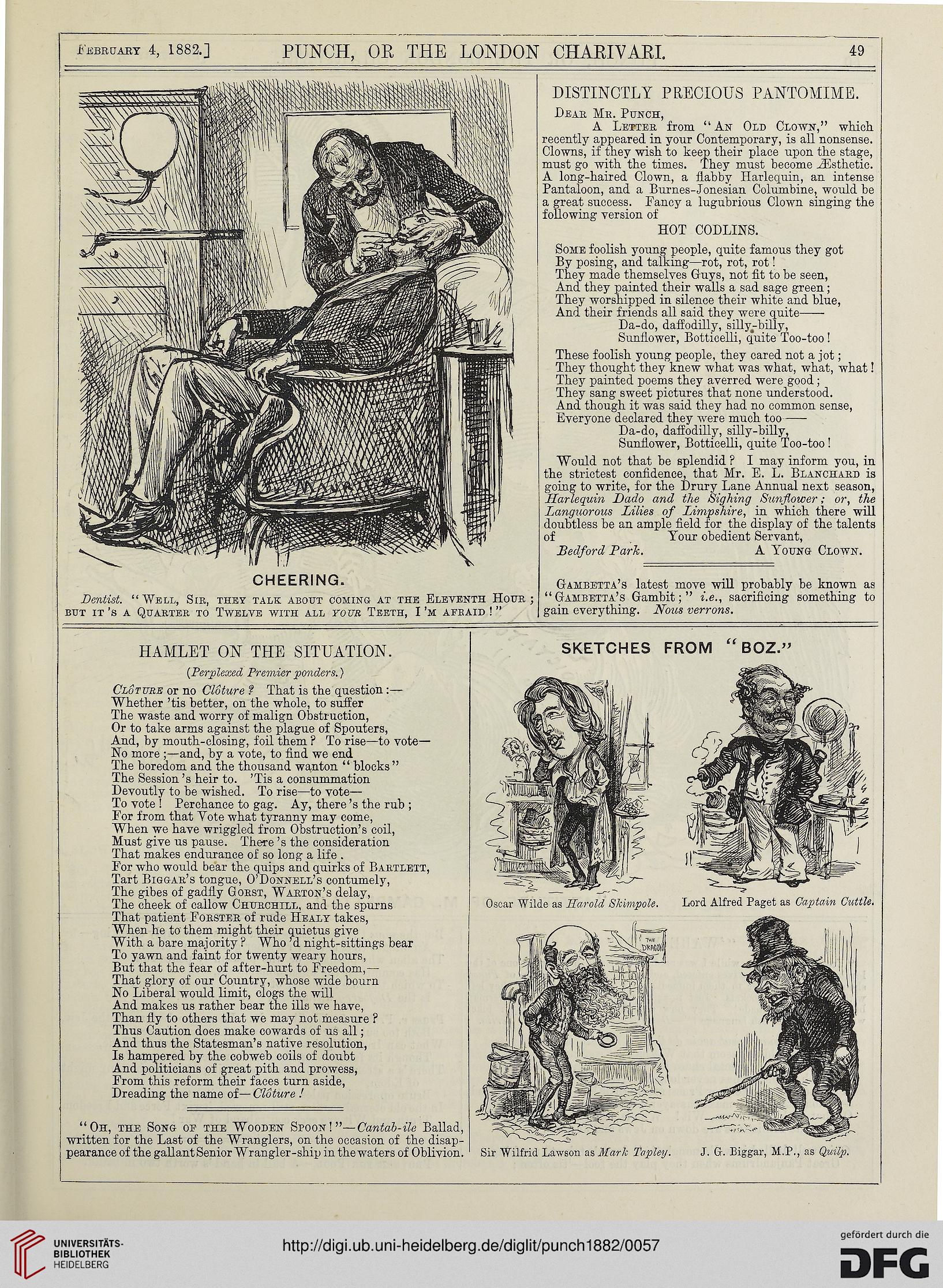 A Letter from “ Ah Old Clown,” wliicli
recently appeared in your Contemporary, is all nonsense.
Clowns, if thev wish to keep their place upon the stage,
mnst go with the times. They must become LEsthetic.
A long-haired Clown, a flabby Harlequin, an intense
Pantaloon, and a Burnes-Jonesian Columbine, would be
a great success. I'ancy a lugubrious Clown singing the
following version of

Some foolish young people, quite famous they got

By posing, and talking—rot, rot, rot!

They made themselves Guys, not fit to he seen,

And they painted their walls a sad sage green;

They worshipped in silence their white and blue,

And their friends all said they were quite-

These foolish young people, they cared not a jot;

They thought they knew what was what, what, what!

They painted poems they averred were good;

They sang sweet pictures that none understood.

And though it was said they had no common sense,

Everyone declared they were much too-

Would not that be splendid ? I may inform you, in
the strictest confldence, that Mr. E. L. Blanchard is
going to write, for the Drury Lane Annual next season,
Harlequin Dado and the Sighing Sunflower; or, the
Languorous Lilies of Limpshire, in which there will
doubtless be an ample field for the display of the talents
of Your obedient Servant,

Dentist. “Well, Sir, they talk about coming at the Eleventh Hour ;
but it ’s a Quarter to Twelve with all your Teeth, I ’m afbaid ! ”

Gambetta’s latest move will probahly be known as
“Gambetta’s Gambit;” i.e., saerificing something to
gain everything. Nous verrons.

HAMLET ON THE SITUATION.

Cloture or no Cloture ? That is the question:—
Whether ’tis better, on the whole, to suffer
The waste and worry of malign Obsti uction,

Or to take arms against the plague of Spouters,

The horedom and the thousand wanton “ blocks ”

The Session ’s heir to. ’Tis a consummation
Devoutly to be wished. To rise—to vote—

To vote ! Perchance to gag. Ay, there ’s the rub ;
For from that Yote what tyranny may come,

When we have wriggled from Obstruction’s coil,

Must give us pause. There ’s the consideration
That makes endurance of so long a life .

Eor who would bear the quips and quirks of Bartlett,
Tart Biggar’s tongue, O’Donnell’s contumely,

The cheek of callow Churchill, and the spurns
That patient Forster of rude Healy takes,

When he to them might their quietus give
With a bare majority ? Who ’d night-sittings bear
To yawn and faint for twenty weary hours,

But that the fear of after-hurt to Freedom,—

That glory of our Country, whose wide bourn
No Liberal would limit, clogs the will
And makes us rather bear the illa we have,

Than fly to others that we may not measure ?

Thus Caution does make cowards of us all;

And thus the Statesman’s native resolution,

Is hampered by the cobweb coils of doubt
And politicians of great pith and prowess,

From this reform their faces turn aside,

Dreading the name of— Cloture !

“Oh, the Song of the Wooden SmoTLC’—Cantab-ile Ballad,
written for the Last of the Wranglers, on the occasion of the disap-
pearance of the gallantSenior Wrangler-ship in thewaters of Oblivion.