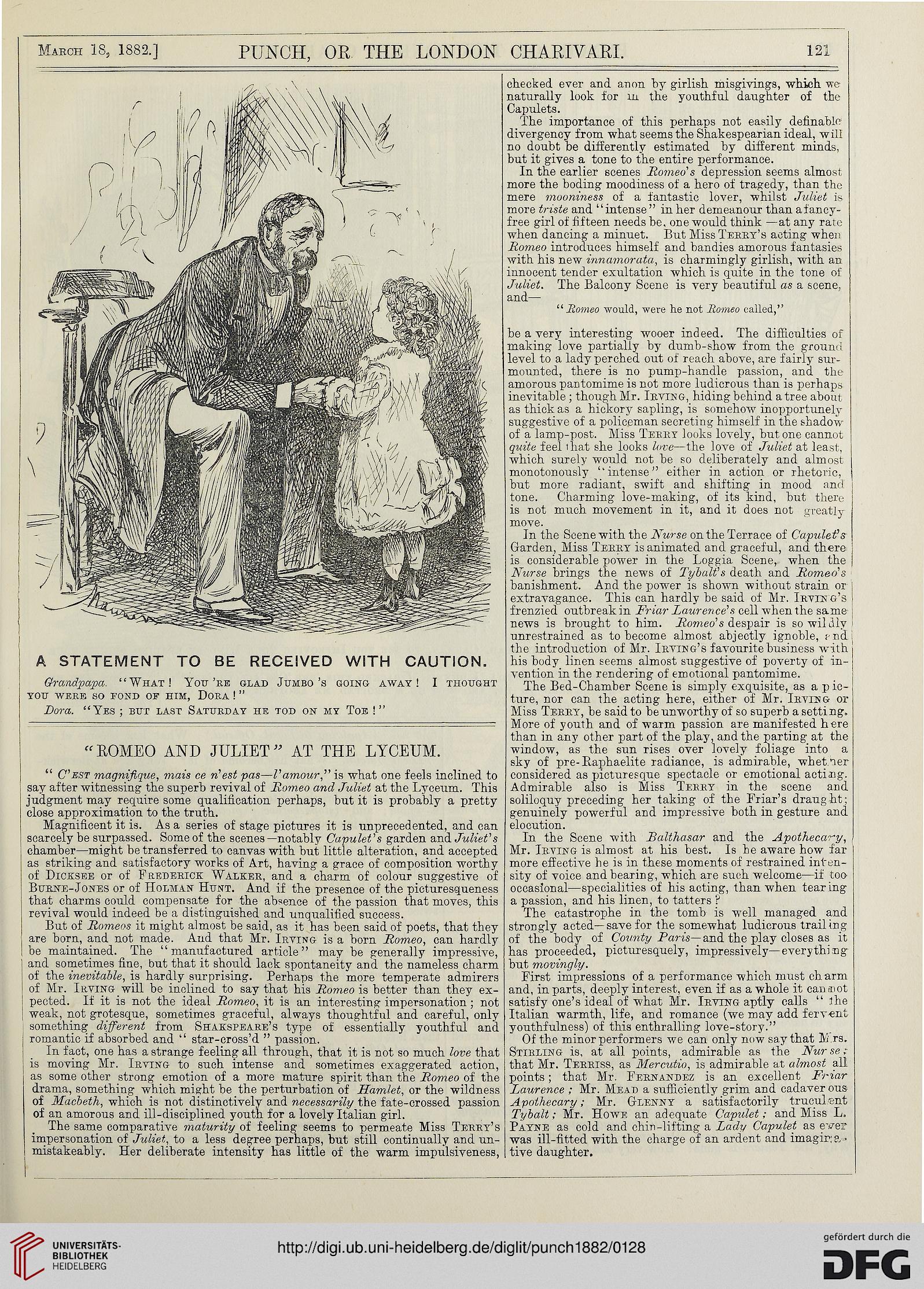 A STATEMENT TO BE RECEIVED WITH CAUTION.

Grandpapa. “What! Yoh ’re glad Jumbo’s going away ! I thought

“ ROMEO AND JULIET” AT THE LYCEUM.

“ C'est magnifique, mais ce n'est pas—I'amour,” is what one feels inclined to
say after witnessing the superb revival of JRomeo ancl Juliet at the Lyceum. This
judg-ment may require some qualitication perhaps, but it is probably a pretty
close approximation to the truth.

Magnificent it is. As a series of stage pictures it is unprecedented, and can
scarcely be surpassed. Someof the scenes — notably Capulet's garden and Juliet's
chamber—might be transferred to canvas with but little alteration, and accepted
as striking and satisfactory works of Art, having a grace of composition worthy
of Dicksee or of Fredekice: Walker, and a charm of colour suggestive of
Burne-Jones or of Holman Hunt. And if the presence of the picturesqueness
that charms could compensate for the absence of the passion that moves, this
revival would indeed be a distinguished and unqualified success.

But of Romeos it might almost be said, as it has been said of poets, that they
are born, and not made. And that Mr. Irying is a born Romeo, can hardly
! be maintained. ^ The “ manufactured article” may be generally impressive,
and sometimes fine, but that it should lack spontaneity and the nameless charm
of the inevitable, is hardly surprising. Perhaps the more temperate admirers
of Mr. iRViNG will be inclined to say that his Romeo is better than they ex-
pected. If it is not the ideal Romeo, it is an interesting impersonation; not
weak, not grotesque, sometimes graceful, always thoughtful and careful, only
something different from Shakspeare’s type of essentially youthful and
romantic if absorbed and “ star-cross’d ” passion.

In fact, one has a strange feeling all through, that it is not so much love that
! is moving Mr. Irving to such intense and sometimes exaggerated action,
as some other strong emotion of a more mature spirit than the Romeo of the
drama, something which misrht be the perturbation of Hamlet, or the wildness
of Macbeth, which is not distinctively and necessarily the fate-crossed passion
of an amorous and ill-disciplined youth for a lovely Italian girl.

The same comparative maturity of feeling seems to permeate Miss Terry’s
impersonation of Juliet, to a less degree perhaps, but still continually and un-
mistakeably. Her deliberate intensity has little of the warm impulsiveness,

ehecked ever and anon by girlish misgivings, whieh we
naturally look for m the youthful daughter of the
Capulets.

The importance of this perhaps not easily definablo
divergency i'rom what seems the Shakespearian ideal, will
no doubt be differently estimated by different minds,
but it gives a tone to the entire performance.

In the earlier scenes Romeo's depression seems almost
more the boding moodiness of a hero of tragedy, than thc
mere mooniness of a fantastic lover, whilst Juliet is
more triste and “intense” in her demeanour than afancy-
free girl of fifteen needs be, one would think —at any rate
when dancing a minuet. But Miss Terry’s acting when
Romeo introduces himself and bandies amorous fantasies
with his new innamorata, is charmingly girlish, with an
innocent tender exultation which is quite in the tone of
Juliet. The Balcony Scene is very beautiful as a seene,
and—

be a very interesting wooer indeed. The difficulties of
making love partially by dumb-show from the ground
level to a lady perched out of reach above, are fairly sur-
mounted, there is no pump-handle passion, and. the
amorous pantomime is not more ludicrous than is perhaps
inevitable ; thoughMr. Irving, hidingbehind atree about
as thick as a hickory sapling, is somehow inopportunely
suggestive of a policeman secreting himself in the shadow
of a lamp-post. Miss Terry looks lovely, butone cannot
quite feel ihat she looks love—the love of Juliet at least,
which surely would not be so deliberately and almost
monotonously “intense” either in action or rhetoric,
but more radiant, swift and shifting in mood and
tone. Charming love-making, of its kind, but there
is not much movement in it, and it does not greatly
move.

In the Seenewith the Nurse ontheTerrace of Capulet's
Garden, Miss Terry isanimated and graceful, and there
is considerable power in the Loggia Scene, when the
Nurse brings the news of Tybalt's death and Romeo's
banishment. And the power is shown without strain or j
extravagance. This can hardly be said of Mr. Irving’s I
frenzied outbreak in Friar Laurence's cell when the same
news is brought to him. Romeo's despair is sowildlv
unrestrained a,s to become almost abjectly ignoble, rnd
the introduction of Mr. Irving’s favourite business with
his body linen seems almost suggestive of poverty of in-
vention in the rendering of emotional pantomime.

The Bed-Chamber Scene is simply exquisite, as a p ic-
ture, nor can the acting here, either of Mr. Irving or
Miss Terry, be said to be unworthy of so superb a setting.
More of youth and of warm passion are manifested here
than in any other part of the play, and the parting at the
window, as the sun rises over lovely foliage into a
sky of pre-Raphaelite radiance, is admirable, whet ner
considered as picturesque spectacle or emotional acting.
Admirable also is Miss Terry in the scene and
soliloquy preceding her taking of the Friar’s draught;
genuinely powerful and impressive both in gesture and
eloeution.

In the Scene with Ralthasar and the Apotheca-ry,
Mr. Irving is almost at his best. Is he aware how far
more effective he is in these moments of restrained inten-
sity of voice and bearing, which are such welcome—if too
oceasional—specialities of his acting, than when tearing
a passion, and his linen, to tatters ?

The catastrophe in the tomb is yvell managed and
strongly acted—save for the somewhat ludicrous trailing
of the body of County Paris— and the play closes as it
has proceeded, picturesquely, impressively—everything
but movingly.

First impressions of a performance which must charm
and, in parts, deeply interest, even if as a whole it can aoot
satisfy one’s ideal of what Mr. Irvtng aptly calls “ ihe
Italian warmth, life, and romance (we may add fervent
youthfulness) of this enthralling love-story.”

Of the minor performers we can only now say that M rs.
Stirling is, at all points, admirable as the Nur se:
that Mr. Terriss, as Mercutio, is admirable at almost all
points; that Mr. Fernandez is an excellent Friar
Laurence ; Mr. Mead a sufficiently grim and cadaverous
Apothecary; Mr. Glenny a satisfactorily trucul/ent
Tybalt; Mr. Howe an adequate Capidet; and Miss L,
Payne as cold and chin-lifting a Lady Capulet as ever
was ill-fitted with the charge of an ardent and imagina-
tive daughter.