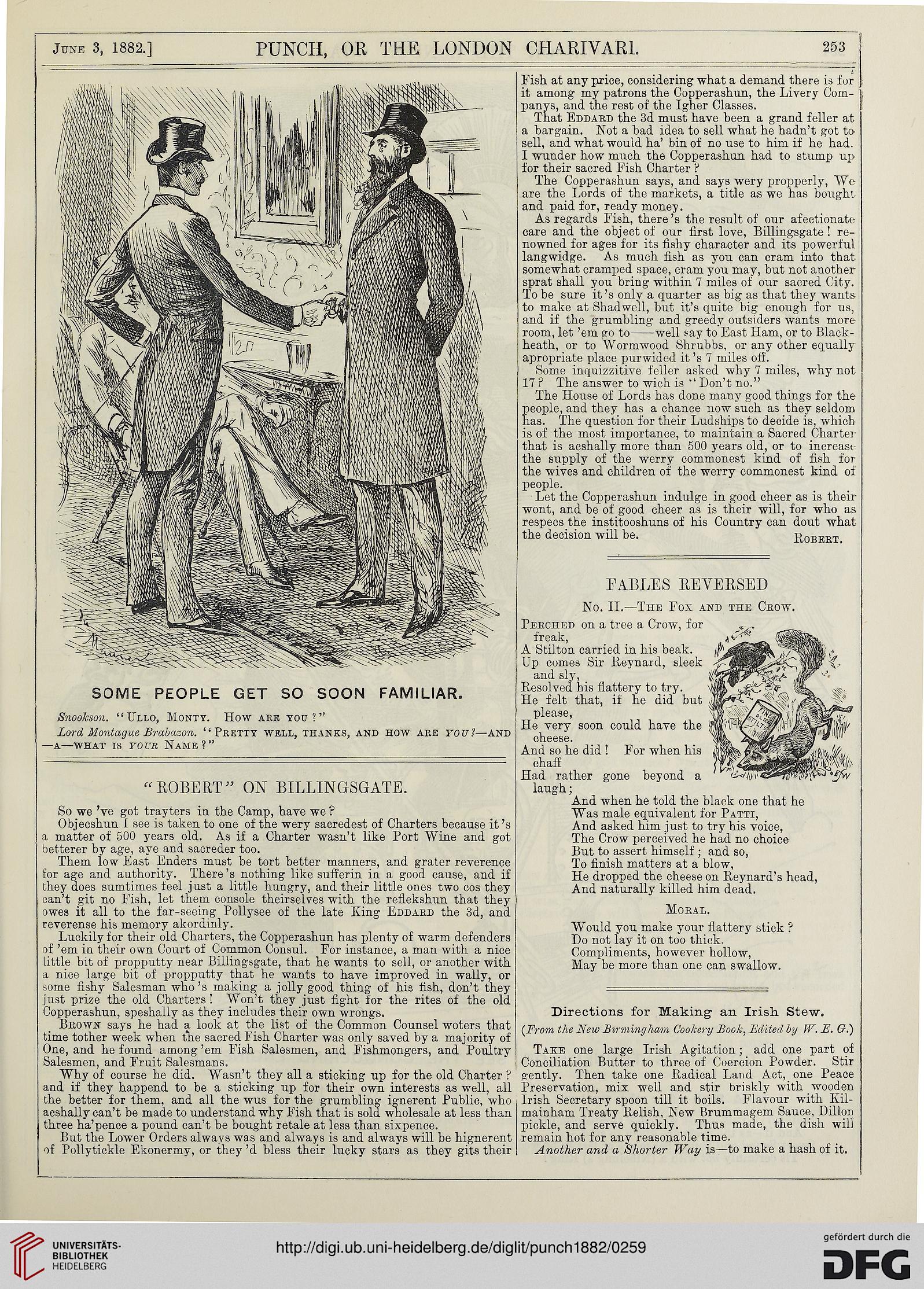 SOME PEOPLE GET SO SOON FAMILIAR.

Lord Montague Brabazon. “ Pretty well, thanks, and how ake you?—and

So we ’ve got trayters ia the Camp, have we ?

Objecshun I see is taken to one of the wery sacredest of Charters because it ’s
a matter of 500 years old. As if a Charter wasu’t like Port Wine and got
betterer by age, aye and sacreder too.

Them low East Enders must be tort better manners, and grater reverence
for age and authority. There ’s nothing like sufferin in a good cause, and if
they does sumtimes feel just a little hungry, and their little ones two cos they
can’t git no Fish, let them console theirselves with the reflekshun that they
owes it all to the far-seeing Pollysee of the late King Eddard the 3d, and.
reverense his memory akordinly.

Luckily for their old Charters, the Copperashun has plenty of warm defenders
of ’em in their own Court of Common Consul. For instance, a man with a nice
Little bit of propputty near Billingsgate, that he wants to sell, or another with
a nice large bit of propputty that he wants to have improved in wally, or
some fishy Salesman who ’s making a jolly good thing of his flsh, don’t they
just prize the old Charters! Won’t they just fight for the rites of the old
Copperashun, speshalLy as they includes their own wrongs.

Brown says he had a look at the list of the Common Counsel woters that
time tother week when the sacred Fish Charter was only saved by a majority of
One, and he found among’em Fish Salesmen, and Fishmongers, and Poultry
Salesmen, and Fruit Salesmans.

Why of course he did. Wasn’t they all a sticking up for the old Charter ?
and if they happend to be a sticking up for their own interests as well, all
the better for them, and all the wus for the grumblin<>' ignerent Publie, who
aeshally can’t be made to understand why Fish that is sola wholesale at less than
three ha’pence a pound can’t be bought retale at less than sixpence.

But the Lower Orders alwavs was and always is and always will be hignerent
of Pollytickle Ekonermy, or they ’d bless their lucky stars as they gits their

Fish at any price, considering what a demand there is for
it among my patrons the Copperashun, the Livery Com-
panys, and the rest of the Igher Classes.

That Eddard the 3d must have been a grand feller at
a bargain. Not a bad idea to sell what he hadn’t got to
sell, and what would ha’ bin of no use to him if he had.
I wunder how much the Copperashun had to stump up
for their sacred Fish Charter ?

The Copperashun says, and says wery propperly, We
are the Lords of the markets, a title as we has bought
and paid for, ready money.

As regards Fish, there ’s the result of our afectionate
care and the object of our tirst love, Billingsgate ! re-
nowned for ages for its fishy character and its powerful
langwidge. As much fish as you can cram into that
somewhat cramped space, cram you may, but not another
sprat shall you bring within 7 miles of our sacred City.
To be sure it ’s only a quarter as big as that they wants
to make at Shadwell, but it’s quite big enough for us,
and if the grumbling and greedy outsiders wants more

heath, or to Wormwood Shrubbs, or any other equally
apropriate place purwided it ’s 7 miles off.

Some inquizzitive feller asked why 7 miles, why not
17 ? The answer to wich is “ Don’t no.”

The House of Lords has done many good things for the
people, and they has a chance now such as they seldom
has. The question for tlieir Ludships to decide is, whicb
is of the most importance, to maintain a Sacred Charter
that is acshally more than 500 years old, or to increase
the supply of the werry commonest kind of fish for
the wives and children of tlie werry commonest kind of
people.

Perched on a tree a Crow, for
freak,

A Stilton carried in liis beali.

Resolved his flattery to try.

He felt that, if he did but
please,

He very soon could have the
cheese.

And so he did ! Forwhenhis
chaff

Had rather gone beyond a
laugh;

And when he told the black one that he
Was male equivalent for Patti,

And aslied him just to try his voice,

The Crow xierceived he had no choice
But to assert himself ; and so,

To finish matters at a blow,

He dropped the cheese on Reynard’s head,
And naturally killed him dead.

Would you make your flattery stick ?

Do not lay it on too thiek.

May be more than one can swallow.

Directions for Making an Irish. Stew.

Another and a Shoi'ter Way is—to make a hash of it.