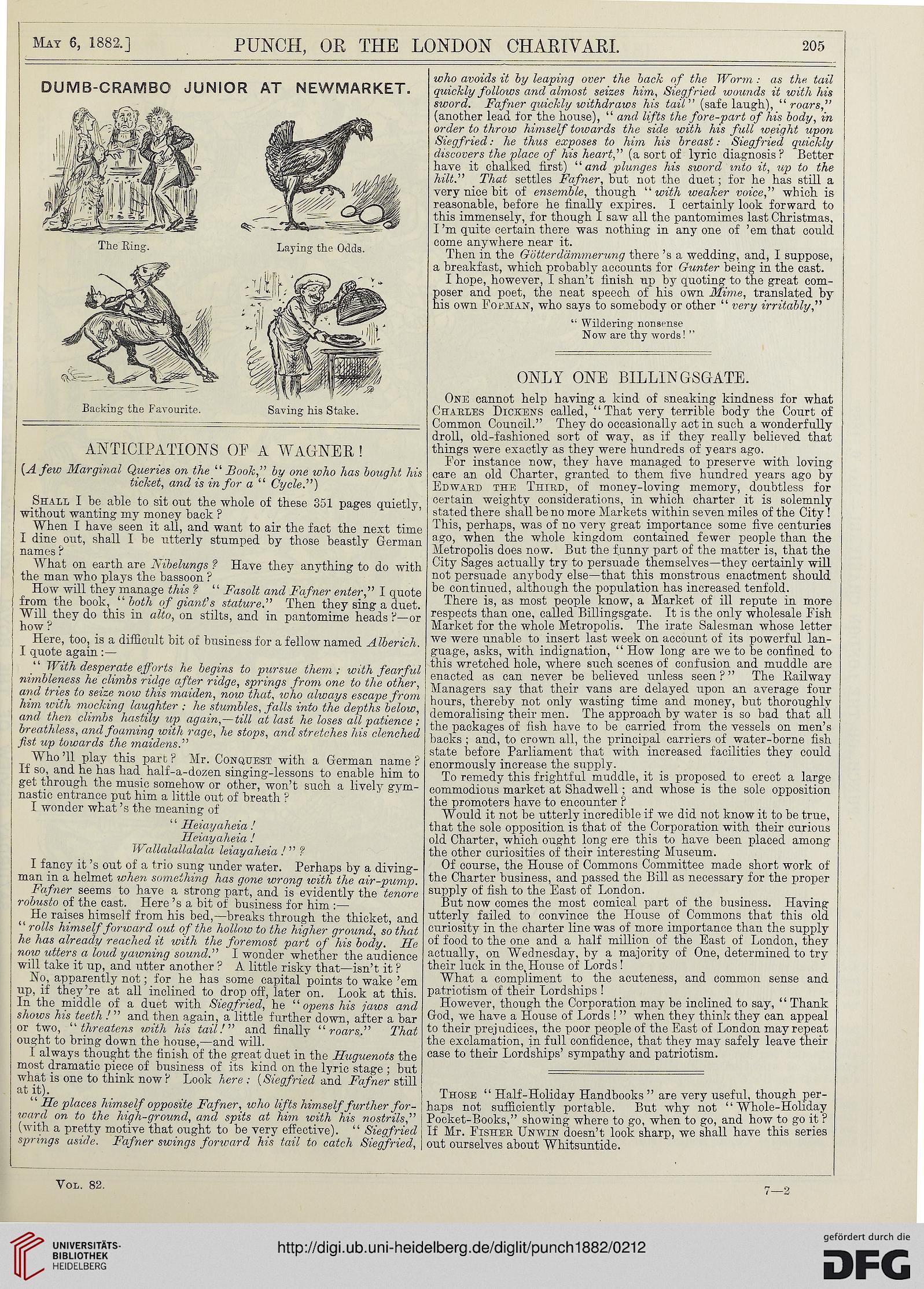 The Eing. Laying the Odds.

(Afew Marginal Queries on the “ Book,” by one who has bought his
ticket, and is infor a “ Cycle.”)

| Sftall I be able to sit out the whole of these 351 pages quietly,
without wanting my money back ?

When I have seen it all, and want to air the fact the next time
| I dine out, shall I be utterly stumped by those beastly German
j names ?

! What on earth are Nibelungs f Have they anything to do with
j the man who plays the bassoon ?

How will they manage this ? “ Fasolt and Fafner enter,” I quote

I from the book, “ both of giant's stature.” Then they sing a duet.

I Will they do this in alto, on stilts, and in pantomime heads ?—or
how ?

j Here, too, is a difficult bit of business for a fellow named Alberich.
j I quote again :—

“ TVith desperate efforts he begins to pursue them ; with fearful
mmbleness he clirnbs ridge after ridge, springs from one to tlie other,
and tries to seize now this maiden, now that, ivho always escape from
liim with mocking laughter : he stumbles, falls into the depths below,
and then climbs hastuy up again, — till atlast he loses all patience;
breathless, and foaming^ with rage, he stops, and stretches his clenched
fist up towards the maidens.”

Who’ll play this part ? Mr. Conquest with a German name ?
If so, and he has had_ half-a-dozen singing-lessons to enable him to
get through the music somehow or other, won’t such a lively gym-
nastic entrance put him a little out of breath ?

I wonder what ’s the meaning of

I fancy it ’s out of a trio sung under water. Perhaps by a diving-
man in a helmet when someihing has gone wrong toith the air-pump.

Fafner seems to have a strong part, and is evidently the tenore
robusto of the cast. Here ’s a bit of business for bim :—

He raises himself from his bed,—breaks through the thicket, and
“ rolls himself forward out of the hollow to the higher ground, so that
he has already reaclied it with the foremost part of his body. He
now utters a loud yawning sound.” I wonder whether the audience
will take it up, and utter another ? A little risky that—isn’t it ?

No, apparently not; for he has some capital points to wake ’em
up, if they’re at all inciined to drop off, later on. Look at this.
In the middle of a duet with Siegfried, he “ opens his jaws and
shows his teeth ! ” and then again, a little further down, after a bar
or two, “ threatens with his tail! ” and finally “ roars.” That
ought to bring down the house,-—and will.

f always thought the finish of the great duet in the Huguenots the
most dramatic piece of business of its kind on the lyric stage ; but
what is one to think now ? Look here ; (Siegfried and Fafner still
at it).

“ He places himself opposite Fafner,_ who lifts himself further for-
ward on to the high-ground, and spits at him with his nostrils,”
(with a pretty motive that ought to be very effective). “ Siegfried
sprmgs aside. Fafner swings forward his tail to catch Siegfried,

who avoids it by leaping over the back of the TVorm : as the tail
quickly follows and almost seizes him, Siegfried wounds it witli his
sword. Fafner quickly withdraws his taii ” (safe laugh), “ roars,”
(another lead for the house), “ and lifts the fore-part of his body, in
order to throw himself towards the side with his full weight upon
Siegfried: he thus exposes to him his breast: Siegfried quickly
discovers the place of his heart,” (a sort of lyric diagnosis? Better
have it chalked first) “ and plunges his sword mto it, up to the
hilt.” That settles Fafner, but not the duet; for he has still a
very nice bit of ensemble, though “ with weaker voice,” which is
reasonable, before he finally expires. I certainly look forward to
this immensely, for though I saw all the pantomimes last Christmas,
I ’m quite certain there was nothing in any one of ’em that could
come anywhere near it.

Then in the Gotterdammerung there ’s a wedding, and, I suppose,
a breakfast, which probably accounts for Gunter being in the cast.

I hope, however, I shan’t finish up by quoting to the great com-
oser and poet, the neat speech of his own Mime, translated by
is own Foe.MAN, who says to somebody or other “ very irritably,”

“ Wildering- nonsense
Now are thy words! ”

One cannot help having a kind of sneaking kindness for what
Cuaut.es Dickens called, “That very terrible body the Court of
Common Council.” They do oceasionally act in such a wonderfully
droll, old-fashioned sort of way, as if they really believed that
things were exactly as they were hundreds of years ago.

For instance now, they have managed to preserve with loving
care an old Charter, granted to them five hundred years ago by
F.uwaut) the Thxkd, of money-loving memory, doubtless for
certain weighty considerations, in which charter it is solemnly
stated there shall be no more Markets within seven miles of the City !
This, perhaps, was of no very great importance some five centuries
ago, when the whole kingdom contained fewer people than the
Metropolis does now. But the funny part of the matter is, that the
City Sages actually try to persuade themselves—they eertainly will
not persuade anybody else—that this monstrous enactment should
be continued, although the population has increased tenfold.

There is, as most people know, a Market of ill repute in more
respects than one, called Billingsgate. It is the only wholesale Fish
Market for the whole Metropolis. The irate Salesman whose letter
we were unable to insert last week on aceount of its powerful lan-
guage, asks, with indignation, “ How long are we to be confined to
this wretched hole, where such scenes of confusion and muddle are
enacted as can never be believed unless seen ? ” The Railway
Managers say that their vans are delayed upon an average four
hours, thereby not only wasting time and money, but thoroughly
demoralising their men. The approach by water is so bad that all
the packages of fish have to be carried from the vessels on men’s
backs ; and, to crown all, the principal carriers of water-borne fish
state before Parliament that with increased facilities they could
enormously increase the supply.

To remedy this frightful muddle, it is proposed to erect a large
commodious market at Shadwell; and whose is the sole opposition
the promoters have to encounter ?

Would it not be utterly incredible if we did not know it to be true,
tbat the sole opposition is that of the Corporation with their curious
old Charter, which ought long ere this to have been placed among
the other curiosities of their interesting Museum.

Of course, the House of Commons Committee made short work of
the Charter business, and passed the Bill as necessary for the proper
supply of fish to the East of London.

But now comes the most comical part of the business. Having
utterly failed to convince the House of Commons that this old
curiosity in the charter line was of more importance than the supply
of food to the one and a half million of the East of London, they
aetually, on Wednesday, by a majority of One, determined to try
their luck in the.House of Lords!

What a compliment to the acuteness, and common sense and
patriotism of their Lordships !

However, though the Corporation may be inclined to say, “ Thank
God, we have a House of Lords ! ” when they thinkthey can appeal
to their prejudices, the poor people of the East of London may repeat
the exclamation, in full confidence, that they may safely leave their
case to their Lordships’ sympathy and patriotism.

Those “ Half-Holiday Handbooks ” are very useful, though per-
baps not sufficiently portable. But why not “ Whole-Holiday
Pocket-Books,” showing where to go, when to go, and how to go it ?
If Mr. Fisher Unwin doesn’t look sharp, we shall have this series
out ourselves about Whitsuntide.