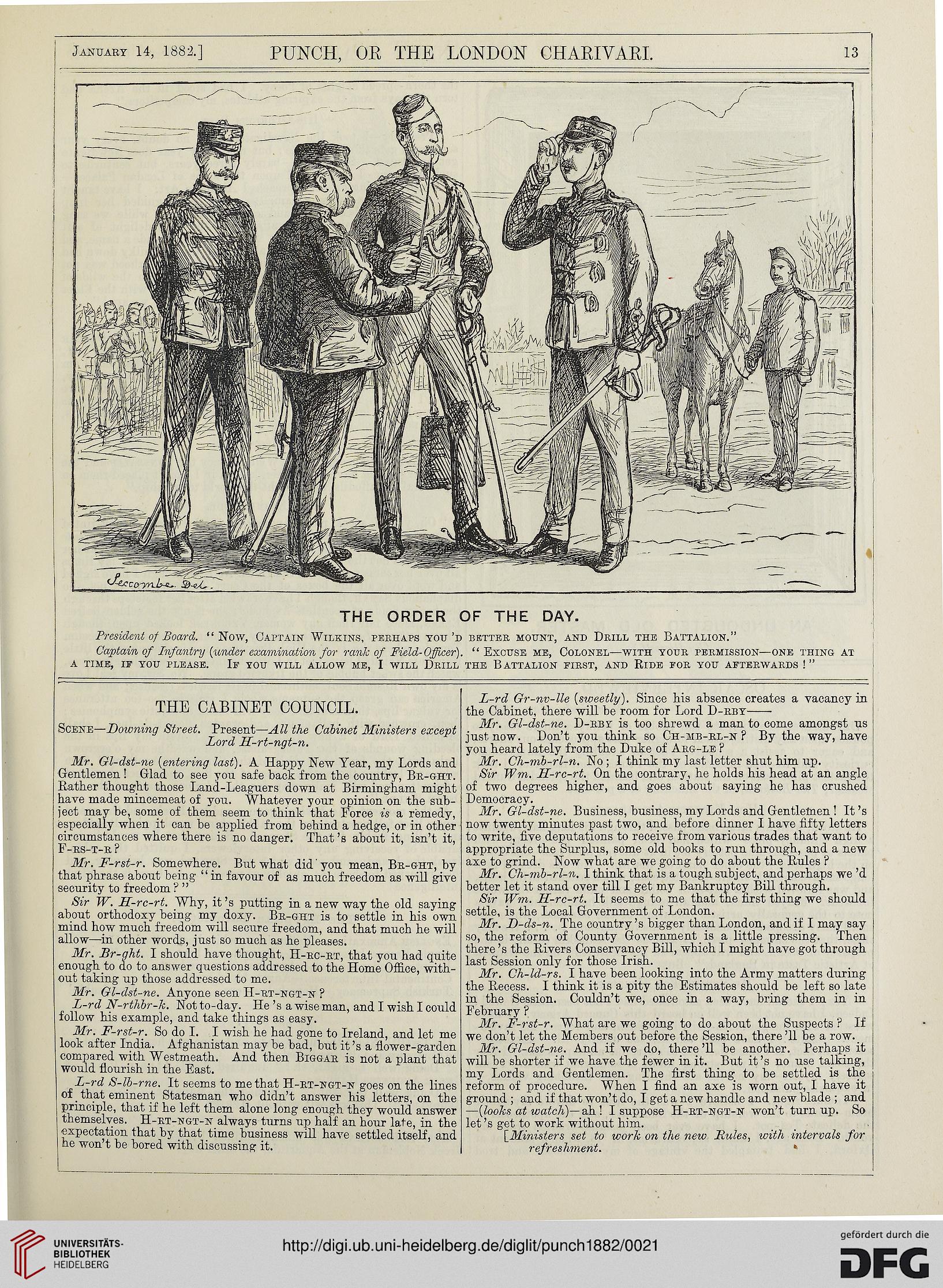 PUNCH, OR THE LONDON CHARIYARI.

THE ORDER OF THE DAY.

Captain of Infantry (under examination for rank of Field-Officer). “ Excuse me, Colonel—with your permission—one thing at

A TIME, IF YOU PLEASE. If YOU WILL ALLOW ME, I WILL DRILL THE BATTALION FIRST, AND RlDE FOR YOU AFTERWARDS ! ”

Mr. Gl-dst-ne (entering last). A Happy New Year, my Lords and
Gentlemen ! Glad to see you safe back from the country, Br-ght.
Rather thought those Land-Leaguers down at Birmingham might
have made mincemeat of you. Whatever yonr opinion on the sub-
ject may be, som.e of them seem to think that Force is a remedy,
especially when it can be applied from behind a hedge, or in other
circumstances where there is no danger. That ’s about it, isn’t it,
F-rs-t-r ?

Mr. F-rst-r. Somewhere. But what did you mean, Br-ght, by
that phrase about being “ in favour of as much freedom as will give
security to freedom ? ”

Sir W. H-rc-rt. Why, it’s putting in a new way the old saying
about orthodoxy being my doxy. Br-ght is to settle in his own
mind how much freedom will secure freedom, and that much he will
allow—in other words, just so much as he pleases.

Mr. Br-aht. I should have thought, H-rc-rt, that you had quite
enough to do to answer questions addressed to the Home Office, with-
out taking up those addressed to me.

L-rd N-rthbr-k. Not to-day. He ’s a wise man, and I wish I could
follow his example, and take things as easy.

Mr. F-rst-r. So do I. I wish he had gone to Ireland, and let me
look after India. Afghanistan may be bad, but it ’s a ilower-garden
compared with Westmeath. And then Biggar is not a plant that
would flourish in the East.

L-rd S-lb-rne. It seems to methat H-rt-ngt-n goes on the lines
of _ that eminent Statesman who didn’t answer his letters, on the
principle, that if he left them alone long enough they would answer
themselves. H-rt-ngt-n always turns up half an hour late, in the
-expectation that by that time business will have settled itself, and
he won t be bored with discussing it.

L-rd Gr-nv-lle (sweetly). Since his absence creates a vacancy in
the Cahinet, there will be room for Lord D-rby-

Mr. Gl-dst-ne. D-rby is too shrewd a man to come amongst us
justnow. Don’t you think so Ch-mb-rl-n ? By the way, have
you heard lately from the Duke of Arg-le ?

Sir Wm. H-rc-rt. On the contrary, he holds his head at an angle
of two degrees higher, and goes about saying he has crushed
Democracy.

Mr. Gl-dst-ne. Business, business, my Lords and Gentlelnen ! It ’s
now twenty minutes past two, and before dinner I have fifty letters
to write; five deputations to receive from various trades that want to
appropriate the Surplus, some old books to run through, and a new
axe to grind. Now what are we going to do about the Rules ?

Mr. Ch-mb-rl-n. I think that is a tough subject, and perhaps we ’d
better let it stand over till I get my Bankruptcy BiU through.

Sir Wm. H-rc-rt. It seems to me that the first thing we should
settle, is the Loeal Government of London.

Mr. D-ds-n. The country ’s bigger than London, and if I may say
so, the reform of County Government is a little pressing. Then
there ’s the Rivers Conservancy BiU, which I might have got through
last Session only for those Irish.

Mr. Ch-ld-rs. I have been looking into the Army matters during
the Recess. I think it is a pity the Estimates should be left so late
in the Session. Couldn’t we, once in a way, bring them in in
February ?

Mr. F-rst-r. What are we going to do about the Suspects ? If
we don’t let the Memhers out before the Session, there ’U be a row.

Mr. Gl-dst-ne. And if we do, there ’U he another. Perhaps it
wUl be shorter if we have the fewer in it. But it’s no use talking,
my Lords and Gentlemen. The first thing to he settled is the
reform of procedure. When I find an axe is worn out, I have it
ground ; and if that won’t do, I get a new handle and new blade ; and
—[loolis at watch)—ah\ I suppose H-rt-ngt-n won’t turn up. So
let ’s get to work without him.

\_Ministers set to work on the new liules, with intervals for
refreshment. *