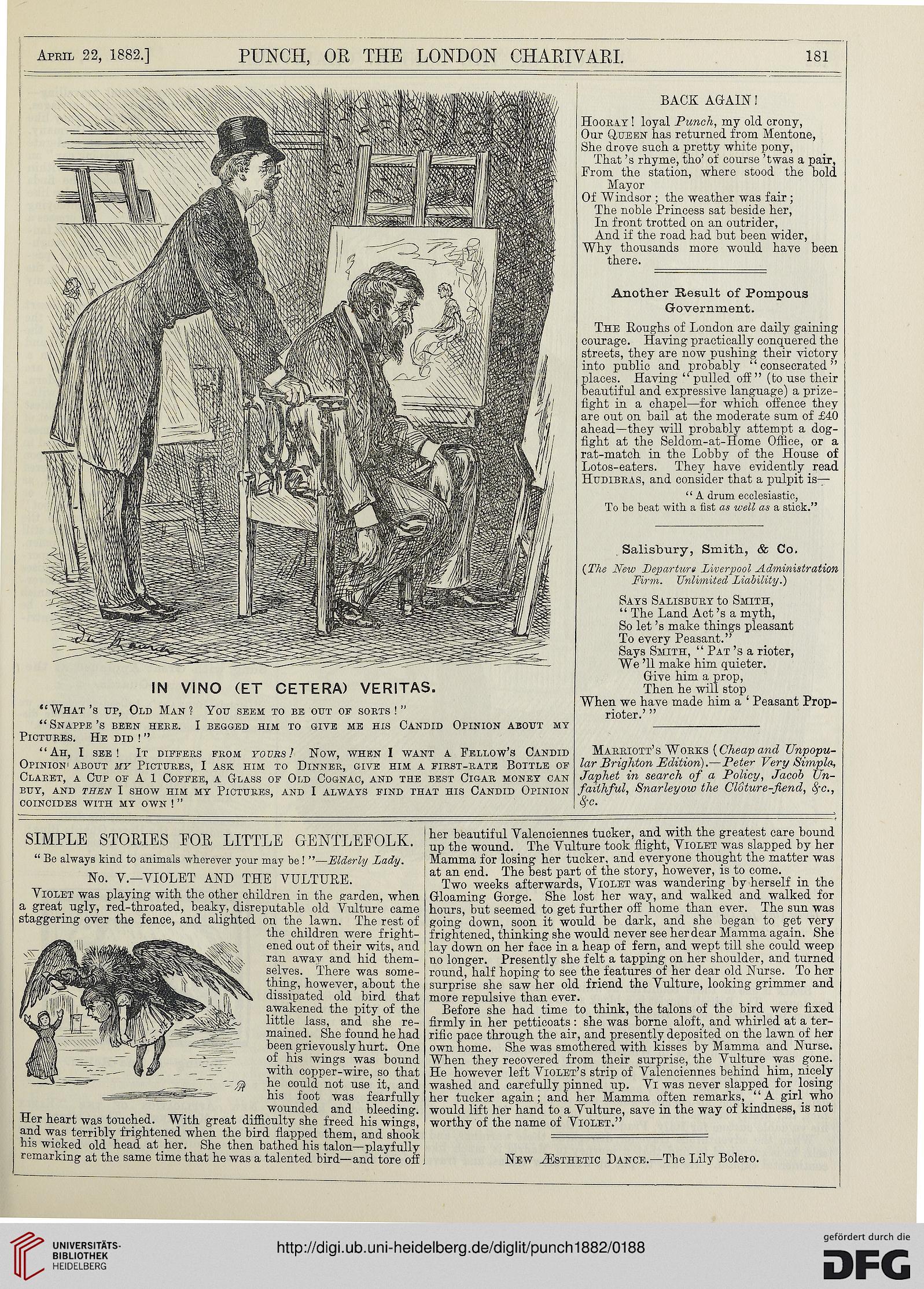 “ Be always kind to animals wherever your may be ! ”—Elderly Lady.

Yiolet was playing with the other children in the trarden, when
a great ugly, red-throated, beaky, disreputable old Yulture came
staggering over the fence, and alighted on the lawn. The rest of

the children were fright-
ened out of their wits, and
ran away and hid them-
selves. There was some-
thing, however, ahout the
dissipated old bird that
awakened the pity of the
little iass, and she re-
mained. She found he had
been grievously hurt. One
of his wings was bound
with copper-wire, so that
he could not use it, and
his foot was fearfully
Tr _ wounded and bleeding.

Her heart was touched. AVith great difficulty she freed his wings,
and was terribly frightened when the bird fiapped them, and shook
his wicked old head at her. She then hathed his talon—playfullv
remarking at the same time that he was a talented hird—and tore off

her beautiful Valenciennes tucker, and with the greatest care bound
up the wound. The Yulture took flight, Violet was slapped hy her
Mamma for losing her tucker, and everyone thought the matter was
at an end. The hest part of the story, however, is to come.

Two weeks afterwards, Violet was wandering hy herself in the
Gloaming Gorge. She lost her way, and walked and walked for
hours, but seemed to get further off home than ever. The sun was
going down, soon it would be dark, and she began to get very
frightened, thinking she would never see herdear Mamma again. She
lay down on her face in a heap of fern, and wept till she could weep
no longer. Presently she felt a tapping on her shoulder, and turned
round, half hoping to see the features of her dear old Nurse. To her
surprise she saw her old friend the Vulture, looking grimmer and
more repulsive than ever.

Before she had time to think, the talons of the bird were fixed
firmly in her petticoats : she was horne aloft, and whirled at a ter-
rific pace through the air, and presently deposited on the lawn of her
own home. She was smothered with kisses by Mamma and Uurse.
When they recovered from their surprise, the Vulture was gone.
He however left Violet’s strip of Valenciennes behind him, nicely
washed and carefully pinned up. Vi was never slapped for losing
her tucker again; and. her Mamma often remarks, “ A girl who
would lift her hand to a Vulture, save in the way of kindness, is not
worthy of the name of Violet.”

Our Qijeen has returned from Mentone,

She drove such a pretty white pony,

That ’s rhyme, tho’ of course ’twas a pair,
From the station, where stood the bold
Mayor

Of Windsor ; the weather was fair ;

The noble Princess sat beside her,

In front trotted on an outrider,

And if the road had but been wider,

Why thousands more would have been
there.

Another Result of Pompous
Government.

The Roughs of London are daily gaining
courage. Having practically conquered the
streets, they are now pushing their vietory
into public and probably “ consecrated ”
places. Having “ pulled off ” (to use their
beautiful and expressive language) a prize-
fight in a chapel—for which offence they
are out on bail at the moderate sum of £40
ahead—they will probably attempt a dog-
fight at the Seldom-at-Home Offiee, or a
rat-match in the Lobby of the House of
Lotos-eaters. They have evidently read
Hcdibras, and consider that a pulpit is—

To be beat with a fist as well as a stick.”

So let ’s make things pleasant
To every Peasant.”

We ’U make him quieter.

Give him a prop,

Then he will stop

When we have made him a ‘ Peasant Prop-
rioter.’ ”

“SNAPPE’s BEEN HEBE. I BEGGED HIM TO GIVE ME HIS CANDID OPINION ABOUT MY
PlCTURES. He DID ! ”

“Ah, I see ! It differs from yovrs ! Now, when I want a Fellow’s Candid

OpINION' ABOUT MY PlCTURES, I ASK HIM TO DlNNER, GIVE HIM A FIRST-RATE BOTTLE OF
Claret, a Cup of A 1 Coffee, a Glass of Old Cognac, and the best Cigar MONEY can

BUY, AND THEN I SHOW HIM MY PlCTURES, AND I ALWAYS FIND THAT HIS CANDID OpINION
COINCIDES WITH MY OWN ! ”