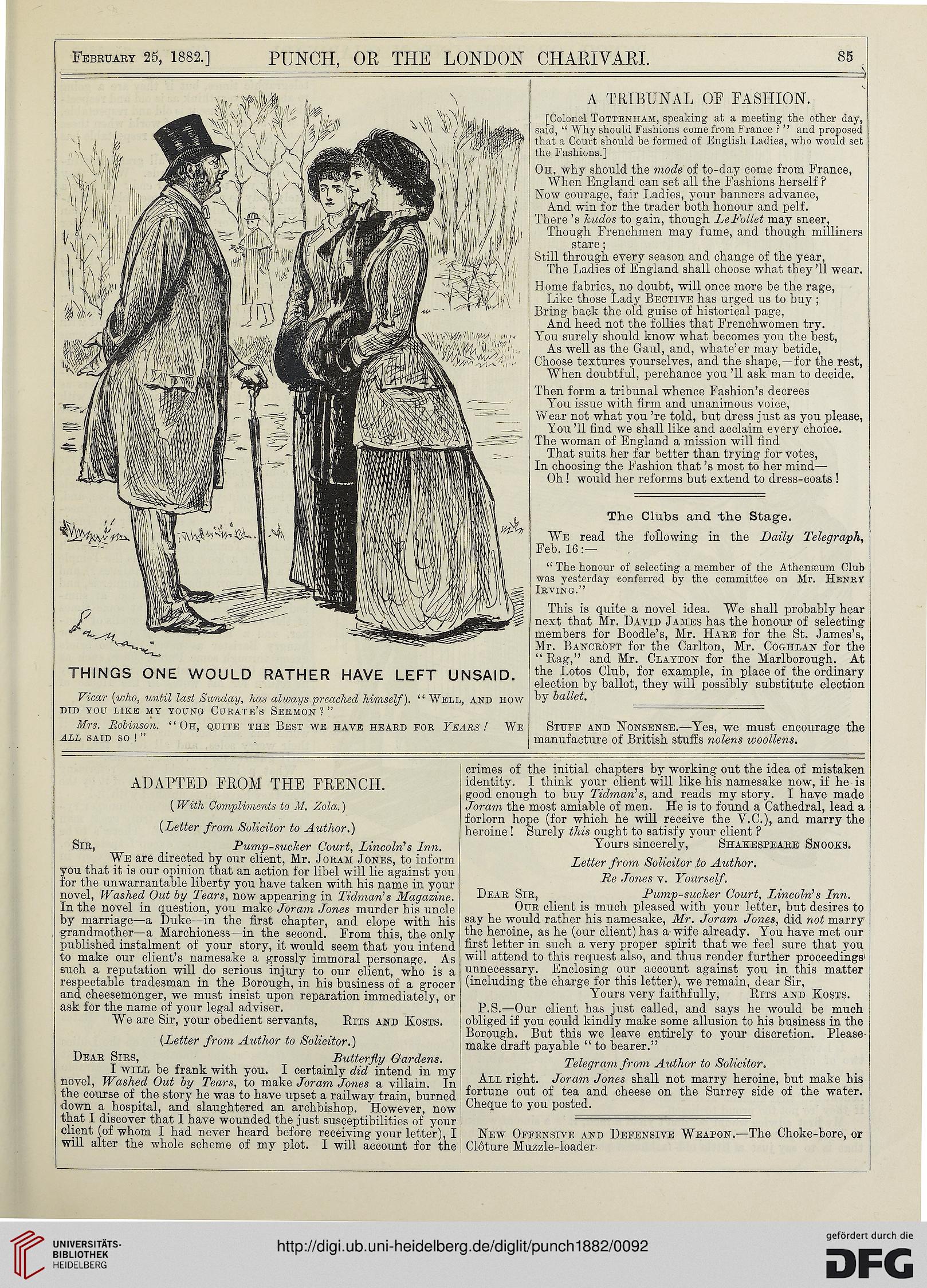 THINGS ONE WOULD RATHER HAVE LEFT UNSAID.

Mrs. Robinson. “ Oh, quite the Best we have heakd eor Years ! We

[Colonel Tottenham, speaking at a meeting the other day,
said, “ Why should Fashions come from France ? ” and proposed
that a Court sliould be formed of English Ladies, who would set
the Fashions.]

On, why should the mode of to-day come from France,
When England can set all the Fashions herself ?

And win for the trader both honour and pelf.

There ’s kudos to gain, though LeFullet may sneer,
Though Frenchmen may fume, and though milliners
stare;

Still through every season and change of the year,

The Ladies of England shall choose what they ’ll wear.

Home fabrics, no doubt, will once more be the rage,

Like those Lady Bective has urged us to buy ;

Bring back the old guise of historical page,

And heed not the follies that Frenchwomen try.

You surely should know what becomes you the best,

As well as the Graul, and, whate’er may betide,

Choose textures yourselves, and the shape,—for the rest,
When doubtful, perchance you ’ll ask man to decide.

Then form a tribunal whence Fashion’s decrees
You issue with firm and unanimous voice,

Wear not what you ’re told, but dress just as you please,
You ’ll find we shall like and acclaim every choice.
The woman of England a mission will find
That suits her far better than trying for votes,

In choosing the Fashion that ’s most to her mind—

Oh! would her reforms but extend to dress-coats !

The Clubs and "the Stage.

We read the foflowing in the Daily Telegraph,
Feb. 16:—

“ The honour of selecting a memher of the Athenaeum Club
was yesterday eonferred. by the committee on Mr. Henry
Irving.”

This is quite a novel idea. We shall probably hear
next that Mr. David James has the honour of selecting
members for Boodle’s, Mr. Hare for the St. James’s,
Mr. Bancroft for the Carlton, Mr. Coghlan for the
“ Rag,” and Mr. Clayton for the Marlborough. At
the Lotos Club, for example, in place of the ordinary
election by ballot, they will possibly substitute eleetion
by hallet.

Stuef and Nonsense.—Yes, we must encourage the
manufacture of British stuffs nolens tooollens.

( With Compliments to M. Zola.)

We are directed by our client, Mr. Jorah Jones, to inform
you that it is our opinion that an action for libel will lie against you
for the unwarrantable liberty you have taken with his name in your
novel, Washed Out hy Tears, now appearing in Tidman's Magazine.
In the novel in question, you make Joram Jones murder his uncle
by marriage—a Duke—in the first chapter, and elope with his
grandmother—a Marchioness—in the second. From this, the only
published instalment of your story, it would seem that you intend.
to make our client’s namesake a grossly immoral personage. As
such a reputation will do serious injury to our client, who is a
respectable tradesman in the Borough, in his business of a grocer
and cheesemonger, we must insist upon reparation immediately, or
ask for the name of your legal adviser.

We are Sir, your obedient servants, Rits and Kosts.

(.Letter from Author to Solicitor.)

I will be frank with you. I certainly did intend in my
novel, Washed Out hy Tears, to make Joram Jones a villain. In
the course of the story he was to have upset a railway train, burned
down a hospital, and slaughtered an archbishop. However, now
that I discover that I have wounded the just susceptibilities of your
client (of whom I had never heard hefore receiving your letter), I
will alter the whole scheme of my plot. I will account for the

crimes of the initial chapters by working out the idea of mistaken
identity. I think your client will like his namesake now, if he is
good enough to buy Tidman's, and reads my story. I have made
Joram the most amiable of men. He is to found a Cathedral, lead a
forlorn hope (for which he will receive the V.C.), and marry the
heroine! Surely this ought to satisfy your client ?

Letter from Solicitor to Author.

Our client is much pleased with your letter, but desires to
say he would rather his namesake, Mr. Joram Jones, did not marry
the heroine, as he (our client) has a wife already. You have met our
first letter in such a very proper spirit that we feel sure that you
will attend to this request also, and thus render further proceedings 1
unneeessary. Enclosing our account against you in this matter
(including the charge for this letter), we remain, dear Sir,

Yours very faithfully, Rits and Kosts.

P.S.—Our client has just called, and says he would be much
obliged if you could kindly make some allusion to his business in the
Borough. But this we leave entirely to your discretion. Please
make draft payable “ to bearer.”

Telegram from Author to Solicitor.

All right. Joram Jones shall not marry heroine, but make his
fortune out of tea and cheese on the Surrey side of the water.
Cheque to you posted.