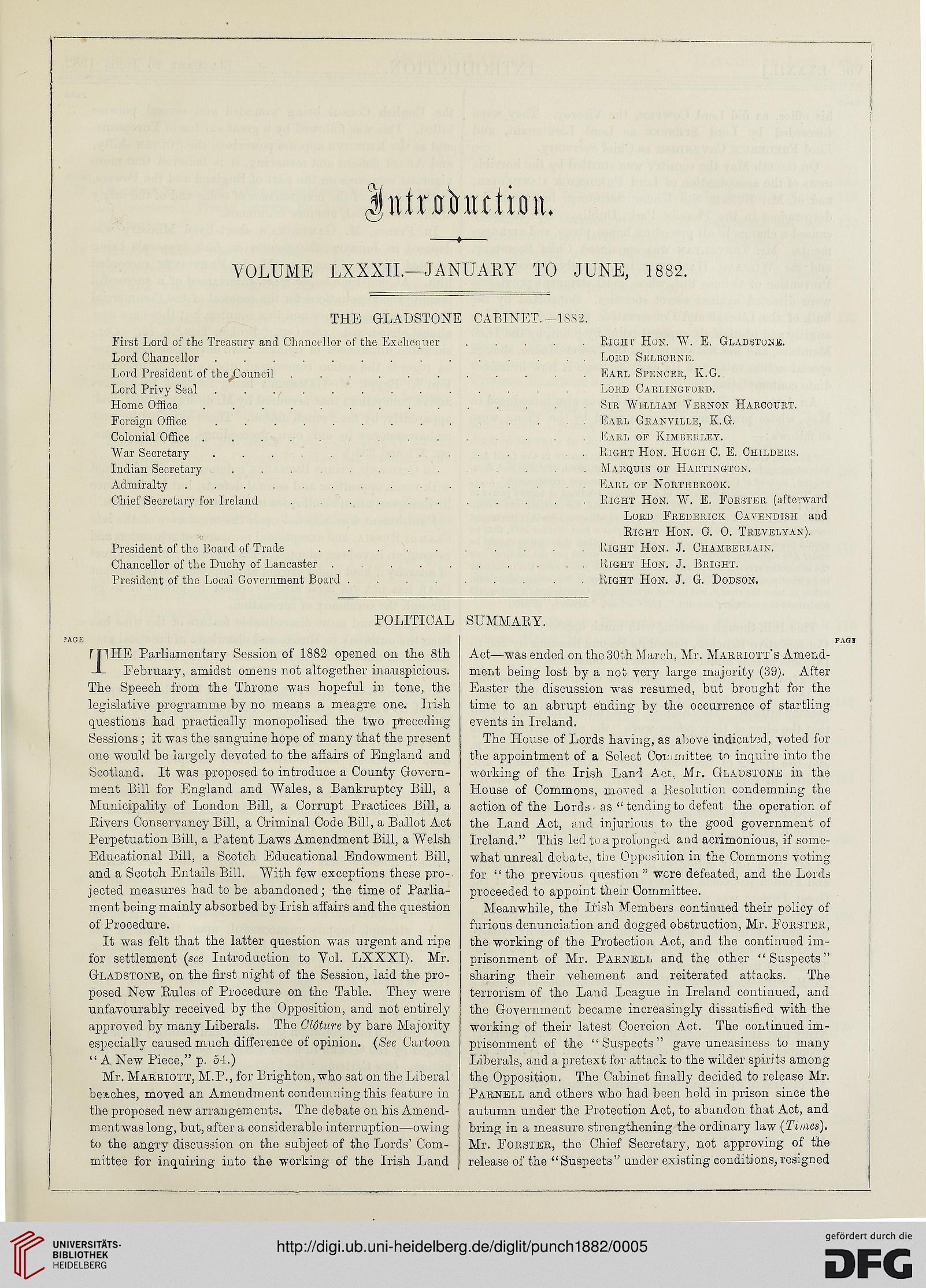 President of the Eoard of Trade
Chancellor of the Duchy of Lancaster .
President of tlie Local Government Board .

rFIHE Parliamentary Session of 1882 opened on the 8th
-L February, amidst omens not altogether inauspicious.
Tho Speech from the Throne was hopeful in tone, the
legislative programme by no means a meagre one. Irish
questions had practically monopolised the two preceding
Sessions ; it was the sanguine hope of many that the present
one would be iargely devoted to the affairs of England and
Scotland. It was proposed to introduce a County Govern-
ment Bill for England and Wales, a Bankruptey Bill, a
Municipality of London Bill, a Corrupt Practices Bill, a
Pdvers Conservancy Bill, a Criminal Code Bill, a Ballot Act
Perpetuation Bill, a Patent Laws Amendment Bill, a Welsh
Educational Bill, a Scotch Educational Endowment Bill,
and a Seotch Entails Bill. With few exceptions these pro-
jected measures had to be abandoned; the time of Parlia-
ment being mainly absorbed by Irish affairs and the question
of Procedure.

It was felt that the latter question was urgent and ripe
for settlement (see Introduction to Yol. LXXXI). Mr.
Gladstone, on the first night of the Sessiou, laid the pro-
posed New Rules of Procedure on the Table. They were
unfavourably received by the Opposition, and not entirely
approved by many Liberals. The Cldture by bare Majority
especially caused much difference of opinion. (See Cartoon
“ A New Piece,” p. 54.)

Mr. Marriott, M.P., for Brighton, who sat on the Liberal
be.tches, moved an Amendment condemning this feature in
the proposed new arrangemcnts. The debate on his Amend-
mcntwas long, but, after a considerable interruption—owdng
to the angry discussion on the subject of the Lords’ Com-
mittee for inquiring into the working of the Irish Land

Act—was ended on the30thMaroh, Mr. Marriott’s Amend-
ment being lost by a not very large majority (39). After
Easter the discussion was resumed, but brought for the
tinre to an abrupt ending by the occurrence of startling
events in Ireland.

The Ilouse of Lords having, as above indicated, voted for
the appointment of a Sclect Comimttee to inquire into the
working of the Irish Land Act, Mr. Gladstone in the
House of Commons, moved a Resolution condemning the
action of the Lords' as ££tendingto defeat the operation of
the Land Act, and injurious to the good government of
Ireland.” This led to aprolonged aud acrimonious, if some-
what unreal dcbate, the Opposition in the Commons voting
for “ the previous question ” wcre defeated, and the Lords
proceeded to appoint their Committee.

Meanwhile, the Irish Members continued their policy of
furious denunciatiou and dogged obstruction, Mr. Porsteh,
tho working of the Protection Act, and the continued im-
prisonment of Mr. Parnell and the other “Suspects”
sharing their vehement and reiterated attacks. The
terrorism of tho Land League in Ireland continued, and
the Government hecame increasingly dissatisfied with the
working of their latest Coercion Act. The coidinued im-
prisonment of the “Suspects” gave uneasiness to many
Liberals, and a pretext for attack to the wilder spirits among
the Opposition. The Cabinet finally decided to release Mr.
Parnell and others who had been held in prison since the
autumn under the Protection Act, to abandou that Act, and
hring in a measure strengthening the ordinary law (Times).
Mr. Porster, the Chief Secretary, not approving of the
release of the “Suspects” uuder existing conditions, rosigned