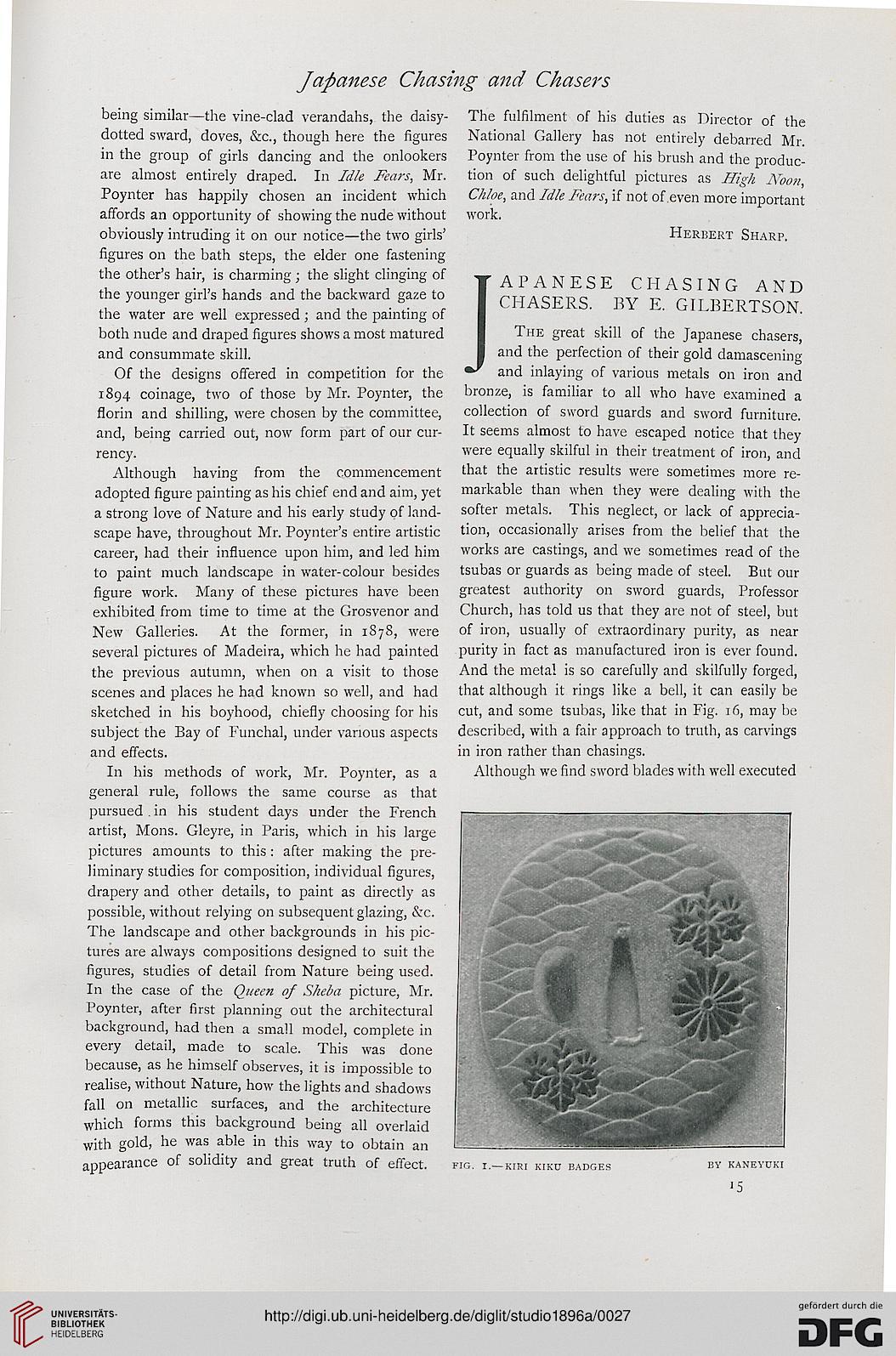 being similar—the vine-clad verandahs, the daisy-
dotted sward, doves, &c, though here the figures
in the group of girls dancing and the onlookers
are almost entirely draped. In Idle Fears, Mr.
Poynter has happily chosen an incident which
affords an opportunity of showing the nude without
obviously intruding it on our notice—the two girls'
figures on the bath steps, the elder one fastening
the other's hair, is charming; the slight clinging of
the younger girl's hands and the backward gaze to
the water are well expressed; and the painting of
both nude and draped figures shows a most matured
and consummate skill.

Of the designs offered in competition for the
1894 coinage, two of those by Mr. Poynter, the
florin and shilling, were chosen by the committee,
and, being carried out, now form part of our cur-
rency.

Although having from the commencement
adopted figure painting as his chief end and aim, yet
a strong love of Nature and his early study of land-
scape have, throughout Mr. Poynter's entire artistic
career, had their influence upon him, and led him
to paint much landscape in water-colour besides
figure work. Many of these pictures have been
exhibited from time to time at the Grosvenor and
New Galleries. At the former, in 1878, were
several pictures of Madeira, which he had painted
the previous autumn, when on a visit to those
scenes and places he had known so well, and had
sketched in his boyhood, chiefly choosing for his
subject the Bay of Funchal, under various aspects
and effects.

In his methods of work, Mr. Poynter, as a
general rule, follows the same course as that
pursued . in his student days under the French
artist, Mons. Gleyre, in Paris, which in his large
pictures amounts to this: after making the pre-
liminary studies for composition, individual figures,
drapery and other details, to paint as directly as
possible, without relying on subsequent glazing, &c.
The landscape and other backgrounds in his pic-
tures are always compositions designed to suit the
figures, studies of detail from Nature being used.
In the case of the Queen of Sheba picture, Mr.
Poynter, after first planning out the architectural
background, had then a small model, complete in
every detail, made to scale. This was done
because, as he himself observes, it is impossible to
realise, without Nature, how the lights and shadows
fall on metallic surfaces, and the architecture
which forms this background being all overlaid
with gold, he was able in this way to obtain an
appearance of solidity and great truth of effect.

The fulfilment of his duties as Director of the
National Gallery has not entirely debarred Mr.
Poynter from the use of his brush and the produc-
tion of such delightful pictures as High Noon,
Chloe, and Idle Fears, if not of even more important
work.

JAPANESE CHASING AND
CHASERS. BY E. GILBERTSON.
The great skill of the Japanese chasers,
and the perfection of their gold damascening
and inlaying of various metals on iron and
bronze, is familiar to all who have examined a
collection of sword guards and sword furniture.
It seems almost to have escaped notice that they
were equally skilful in their treatment of iron, and
that the artistic results were sometimes more re-
markable than when they were dealing with the
softer metals. This neglect, or lack of apprecia-
tion, occasionally arises from the belief that the
works are castings, and we sometimes read of the
tsubas or guards as being made of steel. But our
greatest authority on sword guards, Professor
Church, has told us that they are not of steel, but
of iron, usually of extraordinary purity, as near
purity in fact as manufactured iron is ever found.
And the metal is so carefully and skilfully forged,
that although it rings like a bell, it can easily be
cut, and some tsubas, like that in Fig. 16, may be
described, with a fair approach to truth, as carvings
in iron rather than chasings.

Although we find sword blades with well executed