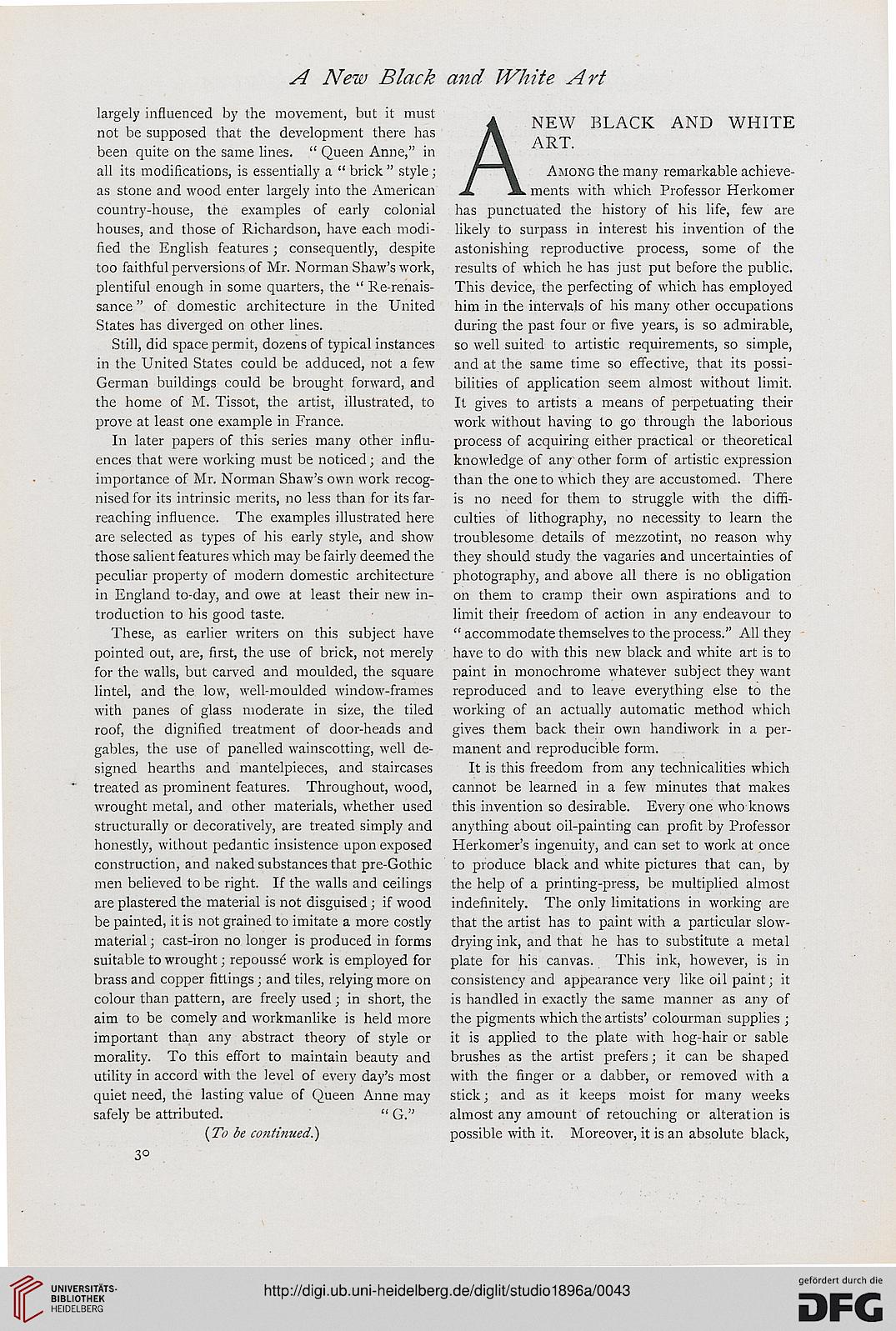 Information about OCR text
A New Black and White Art

largely influenced by the movement, but it must
not be supposed that the development there has
been quite on the same lines. " Queen Anne," in
all its modifications, is essentially a " brick " style ;
as stone and wood enter largely into the American
country-house, the examples of early colonial
houses, and those of Richardson, have each modi-
fied the English features; consequently, despite
too faithful perversions of Mr. Norman Shaw's work,
plentiful enough in some quarters, the " Re-renais-
sance " of domestic architecture in the United
States has diverged on other lines.

Still, did space permit, dozens of typical instances
in the United States could be adduced, not a few
German buildings could be brought forward, and
the home of M. Tissot, the artist, illustrated, to
prove at least one example in France.

In later papers of this series many other influ-
ences that were working must be noticed; and the
importance of Mr. Norman Shaw's own work recog-
nised for its intrinsic merits, no less than for its far-
reaching influence. The examples illustrated here
are selected as types of his early style, and show
those salient features which may be fairly deemed the
peculiar property of modern domestic architecture
in England to-day, and owe at least their new in-
troduction to his good taste.

These, as earlier writers on this subject have
pointed out, are, first, the use of brick, not merely
for the walls, but carved and moulded, the square
lintel, and the low, well-moulded window-frames
with panes of glass moderate in size, the tiled
roof, the dignified treatment of door-heads and
gables, the use of panelled wainscotting, well de-
signed hearths and mantelpieces, and staircases
treated as prominent features. Throughout, wood,
wrought metal, and other materials, whether used
structurally or decoratively, are treated simply and
honestly, without pedantic insistence upon exposed
construction, and naked substances that pre-Gothic
men believed to be right. If the walls and ceilings
are plastered the material is not disguised ; if wood
be painted, it is not grained to imitate a more costly
material; cast-iron no longer is produced in forms
suitable to wrought; repousse work is employed for
brass and copper fittings ; and tiles, relying more on
colour than pattern, are freely used ; in short, the
aim to be comely and workmanlike is held more
important than any abstract theory of style or
morality. To this effort to maintain beauty and
utility in accord with the level of every day's most
quiet need, the lasting value of Queen Anne may
safely be attributed. " G."

ANEW BLACK AND WHITE
ART.
Among the many remarkable achieve-
ments with which Professor Herkomer
has punctuated the history of his life, few are
likely to surpass in interest his invention of the
astonishing reproductive process, some of the
results of which he has just put before the public.
This device, the perfecting of which has employed
him in the intervals of his many other occupations
during the past four or five years, is so admirable,
so well suited to artistic requirements, so simple,
and at the same time so effective, that its possi-
bilities of application seem almost without limit.
It gives to artists a means of perpetuating their
work without having to go through the laborious
process of acquiring either practical or theoretical
knowledge of any other form of artistic expression
than the one to which they are accustomed. There
is no need for them to struggle with the diffi-
culties of lithography, no necessity to learn the
troublesome details of mezzotint, no reason why
they should study the vagaries and uncertainties of
photography, and above all there is no obligation
on them to cramp their own aspirations and to
limit their freedom of action in any endeavour to
" accommodate themselves to the process." All they
have to do with this new black and white art is to
paint in monochrome whatever subject they want
reproduced and to leave everything else to the
working of an actually automatic method which
gives them back their own handiwork in a per-
manent and reproducible form.

It is this freedom from any technicalities which
cannot be learned in a few minutes that makes
this invention so desirable. Every one who knows
anything about oil-painting can profit by Professor
Herkomer's ingenuity, and can set to work at once
to produce black and white pictures that can, by
the help of a printing-press, be multiplied almost
indefinitely. The only limitations in working are
that the artist has to paint with a particular slow-
drying ink, and that he has to substitute a metal
plate for his canvas. This ink, however, is in
consistency and appearance very like oil paint; it
is handled in exactly the same manner as any of
the pigments which the artists' colourman supplies ;
it is applied to the plate with hog-hair or sable
brushes as the artist prefers; it can be shaped
with the finger or a dabber, or removed with a
stick; and as it keeps moist for many weeks
almost any amount of retouching or alteration is
possible with it. Moreover, it is an absolute black,