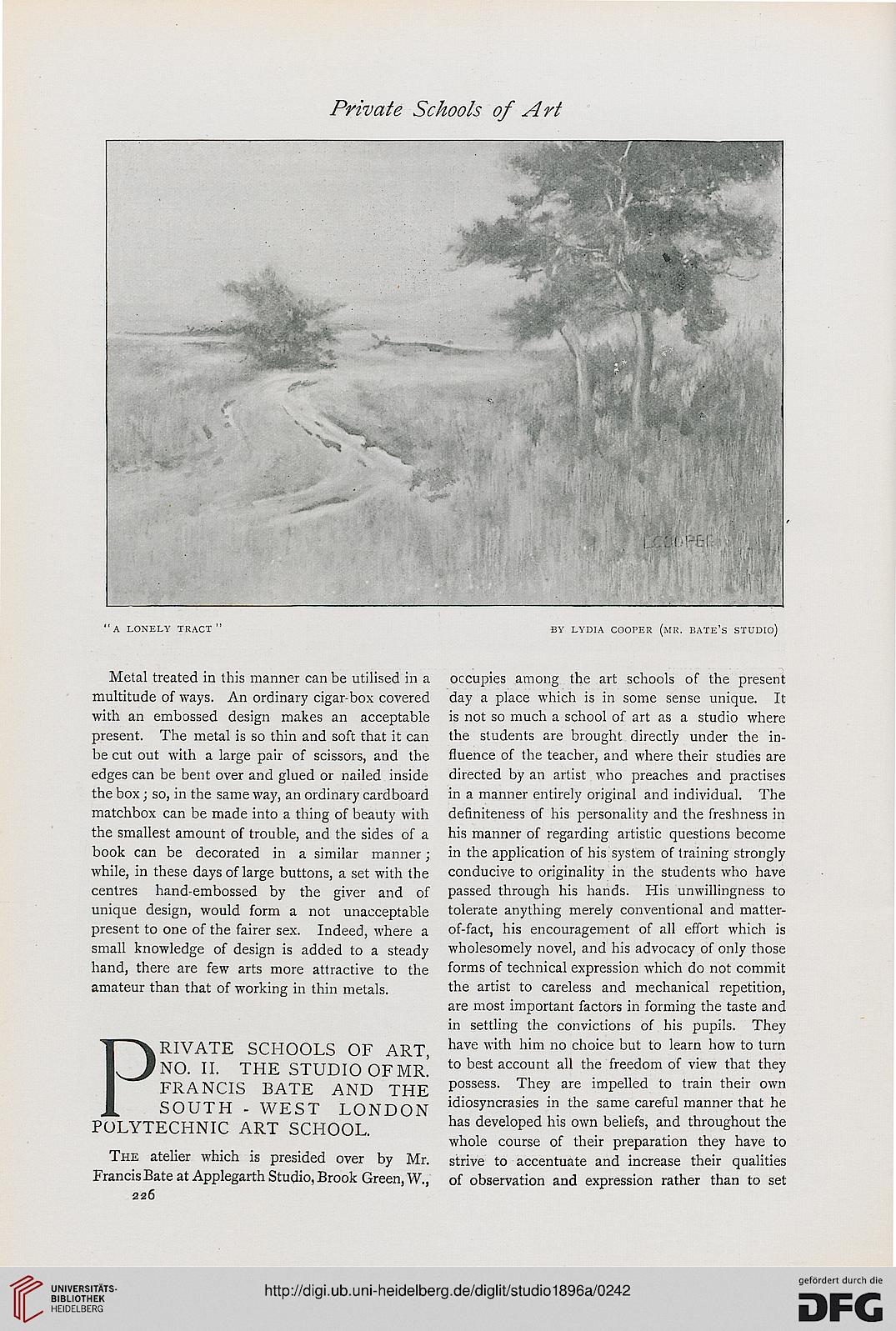 Metal treated in this manner can be utilised in a
multitude of ways. An ordinary cigar-box covered
with an embossed design makes an acceptable
present. The metal is so thin and soft that it can
be cut out with a large pair of scissors, and the
edges can be bent over and glued or nailed inside
the box; so, in the same way, an ordinary cardboard
matchbox can be made into a thing of beauty with
the smallest amount of trouble, and the sides of a
book can be decorated in a similar manner;
while, in these days of large buttons, a set with the
centres hand-embossed by the giver and of
unique design, would form a not unacceptable
present to one of the fairer sex. Indeed, where a
small knowledge of design is added to a steady
hand, there are few arts more attractive to the
amateur than that of working in thin metals.

PRIVATE SCHOOLS OF ART,
NO. II. THE STUDIO OF MR.
FRANCIS BATE AND THE
SOUTH - WEST LONDON
POLYTECHNIC ART SCHOOL.

The atelier which is presided over by Mr.
Francis Bate at Applegarth Studio, Brook Green, W.,
226

occupies among the art schools of the present
day a place which is in some sense unique. It
is not so much a school of art as a studio where
the students are brought directly under the in-
fluence of the teacher, and where their studies are
directed by an artist who preaches and practises
in a manner entirely original and individual. The
definiteness of his personality and the freshness in
his manner of regarding artistic questions become
in the application of his system of training strongly
conducive to originality in the students who have
passed through his hands. His unwillingness to
tolerate anything merely conventional and matter-
of-fact, his encouragement of all effort which is
wholesomely novel, and his advocacy of only those
forms of technical expression which do not commit
the artist to careless and mechanical repetition,
are most important factors in forming the taste and
in settling the convictions of his pupils. They
have with him no choice but to learn how to turn
to best account all the freedom of view that they
possess. They are impelled to train their own
idiosyncrasies in the same careful manner that he
has developed his own beliefs, and throughout the
whole course of their preparation they have to
strive to accentuate and increase their qualities
of observation and expression rather than to set