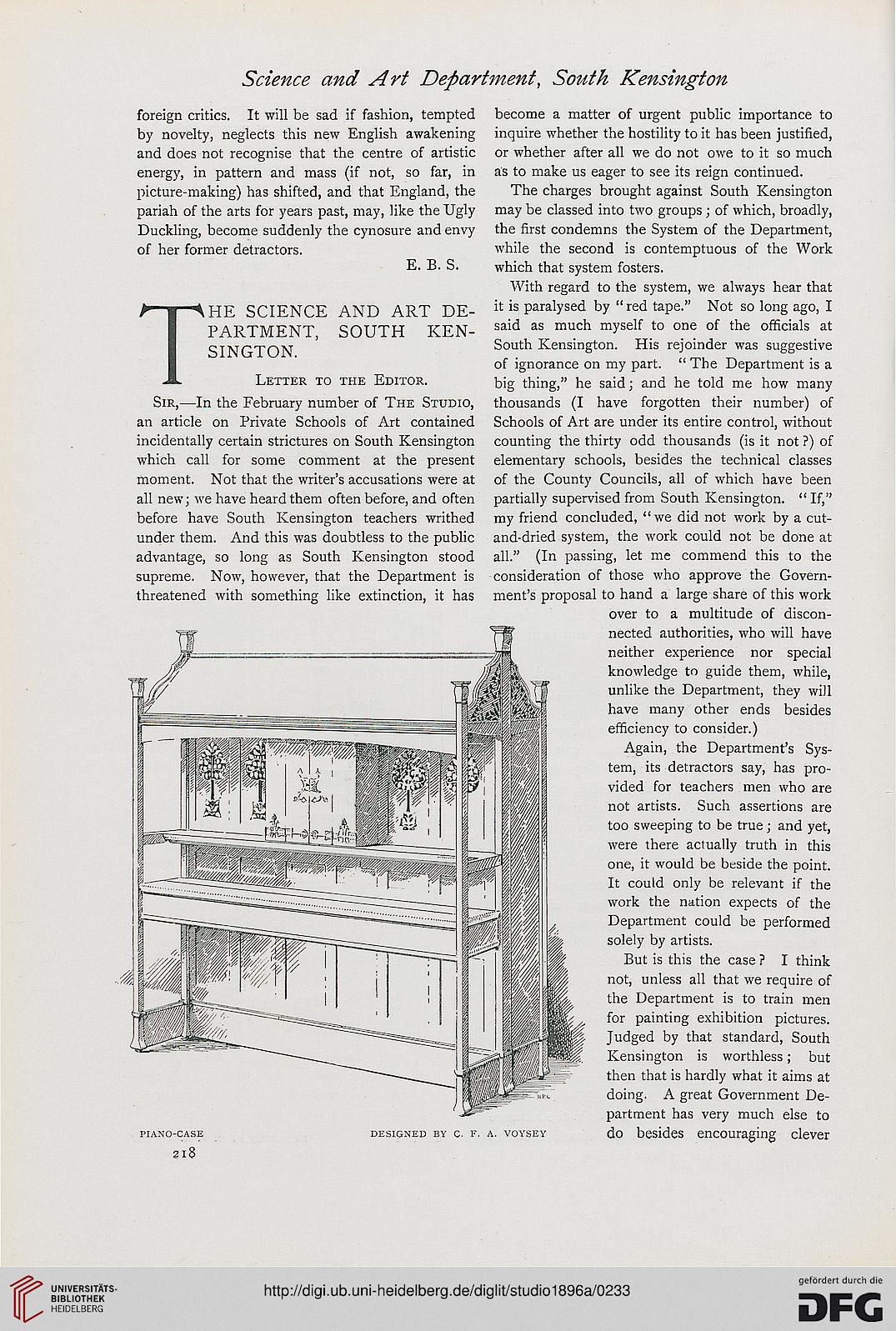 foreign critics. It will be sad if fashion, tempted become a matter of urgent public importance to
by novelty, neglects this new English awakening inquire whether the hostility to it has been justified,
and does not recognise that the centre of artistic or whether after all we do not owe to it so much
energy, in pattern and mass (if not, so far, in as to make us eager to see its reign continued,
picture-making) has shifted, and that England, the The charges brought against South Kensington
pariah of the arts for years past, may, like the Ugly may be classed into two groups ; of which, broadly,
Duckling, become suddenly the cynosure and envy the first condemns the System of the Department,
of her former detractors. while the second is contemptuous of the Work

E. B. S. which that system fosters.

With regard to the system, we always hear that

THE SCIENCE AND ART DE- it is paralysed by "red tape." Not so long ago, I
PARTMENT SOUTH KEN- sa^ as mucn myself to one of the officials at
SINGTON ' South Kensington. His rejoinder was suggestive

of ignorance on my part. " The Department is a
Letter to the Editor. big thing," he said; and he told me how many

Sir,—In the February number of The Studio, thousands (I have forgotten their number) of
an article on Private Schools of Art contained Schools of Art are under its entire control, without
incidentally certain strictures on South Kensington counting the thirty odd thousands (is it not ?) of
which call for some comment at the present elementary schools, besides the technical classes
moment. Not that the writer's accusations were at of the County Councils, all of which have been
all new; we have heard them often before, and often partially supervised from South Kensington. " If,"
before have South Kensington teachers writhed my friend concluded, " we did not work by a cut-
under them. And this was doubtless to the public and-dried system, the work could not be done at
advantage, so long as South Kensington stood all." (In passing, let me commend this to the
supreme. Now, however, that the Department is consideration of those who approve the Govern-
threatened with something like extinction, it has ment's proposal to hand a large share of this work

over to a multitude of discon-
nected authorities, who will have
neither experience nor special
knowledge to guide them, while,
unlike the Department, they will
have many other ends besides
efficiency to consider.)

Again, the Department's Sys-
tem, its detractors say, has pro-
vided for teachers men who are
not artists. Such assertions are
too sweeping to be true ; and yet,
were there actually truth in this
one, it would be beside the point.
It could only be relevant if the
work the nation expects of the
Department could be performed
solely by artists.

But is this the case ? I think
| not, unless all that we require of
1 the Department is to train men
^ . for painting exhibition pictures.
||p. Judged by that standard, South
||f Kensington is worthless; but
then that is hardly what it aims at
doing. A great Government De-
' ia^"" partment has very much else to

piano-case designed by c. f. a. voysey do besides encouraging clever