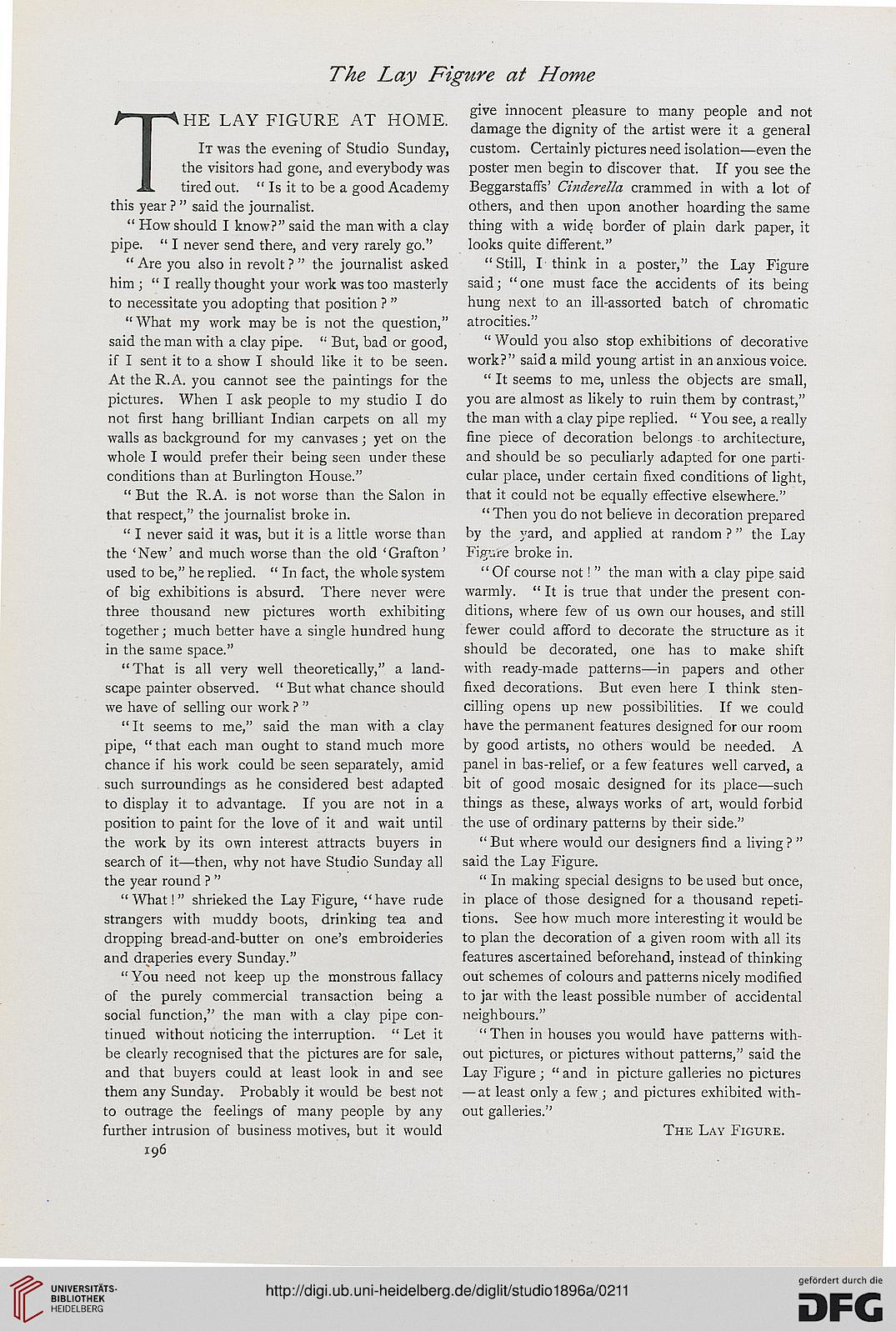 THE LAY FIGURE AT HOME.
It was the evening of Studio Sunday,
the visitors had gone, and everybody was
tired out. "Is it to be a good Academy
this year ? " said the journalist.

" How should I know?" said the man with a clay
pipe. " I never send there, and very rarely go."

" Are you also in revolt ? " the journalist asked
him ; " I really thought your work was too masterly
to necessitate you adopting that position ? "

"What my work maybe is not the question,"
said the man with a clay pipe. " But, bad or good,
if I sent it to a show I should like it to be seen.
At the R.A. you cannot see the paintings for the
pictures. When I ask people to my studio I do
not first hang brilliant Indian carpets on all my
walls as background for my canvases; yet on the
whole I would prefer their being seen under these
conditions than at Burlington House."

" But the R.A. is not worse than the Salon in
that respect," the journalist broke in.

" I never said it was, but it is a little worse than
the 'New' and much worse than the old 'Grafton'
used to be," he replied. " In fact, the whole system
of big exhibitions is absurd. There never were
three thousand new pictures worth exhibiting
together; much better have a single hundred hung
in the same space."

"That is all very well theoretically," a land-
scape painter observed. " But what chance should
we have of selling our work ? "

"It seems to me," said the man with a clay
pipe, " that each man ought to stand much more
chance if his work could be seen separately, amid
such surroundings as he considered best adapted
to display it to advantage. If you are not in a
position to paint for the love of it and wait until
the work by its own interest attracts buyers in
search of it—then, why not have Studio Sunday all
the year round ? "

"What!" shrieked the Lay Figure, "have rude
strangers with muddy boots, drinking tea and
dropping bread-and-butter on one's embroideries
and draperies every Sunday."

" You need not keep up the monstrous fallacy
of the purely commercial transaction being a
social function," the man with a clay pipe con-
tinued without noticing the interruption. " Let it
be clearly recognised that the pictures are for sale,
and that buyers could at least look in and see
them any Sunday. Probably it would be best not
to outrage the feelings of many people by any
further intrusion of business motives, but it would
196

give innocent pleasure to many people and not
damage the dignity of the artist were it a general
custom. Certainly pictures need isolation—even the
poster men begin to discover that. If you see the
Beggarstaffs' Cinderella crammed in with a lot of
others, and then upon another hoarding the same
thing with a wide border of plain dark paper, it
looks quite different."

"Still, I think in a poster," the Lay Figure
said; " one must face the accidents of its being
hung next to an ill-assorted batch of chromatic
atrocities."

" Would you also stop exhibitions of decorative
work?" said a mild young artist in an anxious voice.

" It seems to me, unless the objects are small,
you are almost as likely to ruin them by contrast,"
the man with a clay pipe replied. " You see, a really
fine piece of decoration belongs to architecture,
and should be so peculiarly adapted for one parti-
cular place, under certain fixed conditions of light,
that it could not be equally effective elsewhere."

"Then you do not believe in decoration prepared
by the yard, and applied at random ?" the Lay
Figure broke in.

" Of course not! " the man with a clay pipe said
warmly. " It is true that under the present con-
ditions, where few of us own our houses, and still
fewer could afford to decorate the structure as it
should be decorated, one has to make shift
with ready-made patterns—in papers and other
fixed decorations. But even here I think sten-
cilling opens up new possibilities. If we could
have the permanent features designed for our room
by good artists, no others would be needed. A
panel in bas-relief, or a few features well carved, a
bit of good mosaic designed for its place—such
things as these, always works of art, would forbid
the use of ordinary patterns by their side."

" But where would our designers find a living ? "
said the Lay Figure.

" In making special designs to be used but once,
in place of those designed for a thousand repeti-
tions. See how much more interesting it would be
to plan the decoration of a given room with all its
features ascertained beforehand, instead of thinking
out schemes of colours and patterns nicely modified
to jar with the least possible number of accidental
neighbours."

"Then in houses you would have patterns with-
out pictures, or pictures without patterns," said the
Lay Figure; "and in picture galleries no pictures
— at least only a few; and pictures exhibited with-
out galleries."