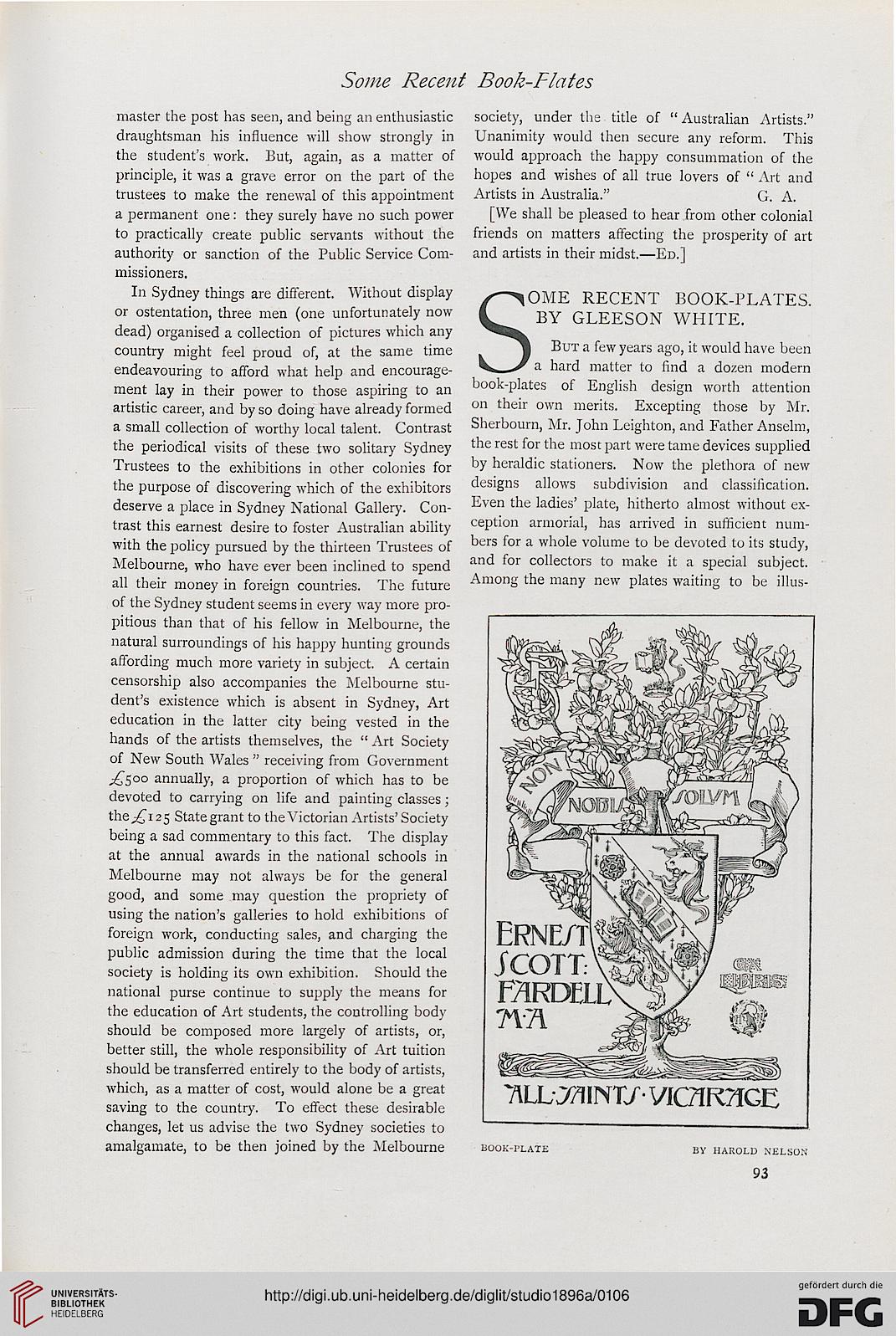 master the post has seen, and being an enthusiastic
draughtsman his influence will show strongly in
the student's work. But, again, as a matter of
principle, it was a grave error on the part of the
trustees to make the renewal of this appointment
a permanent one: they surely have no such power
to practically create public servants without the
authority or sanction of the Public Service Com-
missioners.

In Sydney things are different. Without display
or ostentation, three men (one unfortunately now
dead) organised a collection of pictures which any
country might feel proud of, at the same time
endeavouring to afford what help and encourage-
ment lay in their power to those aspiring to an
artistic career, and by so doing have already formed
a small collection of worthy local talent. Contrast
the periodical visits of these two solitary Sydney
Trustees to the exhibitions in other colonies for
the purpose of discovering which of the exhibitors
deserve a place in Sydney National Gallery. Con-
trast this earnest desire to foster Australian ability
with the policy pursued by the thirteen Trustees of
Melbourne, who have ever been inclined to spend
all their money in foreign countries. The future
of the Sydney student seems in every way more pro-
pitious than that of his fellow in Melbourne, the
natural surroundings of his happy hunting grounds
affording much more variety in subject. A certain
censorship also accompanies the Melbourne stu-
dent's existence which is absent in Sydney, Art
education in the latter city being vested in the
hands of the artists themselves, the " Art Society
of New South Wales " receiving from Government
,£500 annually, a proportion of which has to be
devoted to carrying on life and painting classes;
the^i25 State grant to the Victorian Artists' Society
being a sad commentary to this fact. The display
at the annual awards in the national schools in
Melbourne may not always be for the general
good, and some may question the propriety of
using the nation's galleries to hold exhibitions of
foreign work, conducting sales, and charging the
public admission during the time that the local
society is holding its own exhibition. Should the
national purse continue to supply the means for
the education of Art students, the controlling body
should be composed more largely of artists, or,
better still, the whole responsibility of Art tuition
should be transferred entirely to the body of artists,
which, as a matter of cost, would alone be a great
saving to the country. To effect these desirable
changes, let us advise the two Sydney societies to
amalgamate, to be then joined by the Melbourne

society, under the title of " Australian Artists."
Unanimity would then secure any reform. This
would approach the happy consummation of the
hopes and wishes of all true lovers of " Art and
Artists in Australia." G. A.

[We shall be pleased to hear from other colonial
friends on matters affecting the prosperity of art
and artists in their midst.—Ed.]

SOME RECENT BOOK-PLATES.
BY GLEESON WHITE.
I But a few years ago, it would have been
a hard matter to find a dozen modern
book-plates of English design worth attention
on their own merits. Excepting those by Mr.
Sherbourn, Mr. John Leighton, and Father Anselm,
the rest for the most part were tame devices supplied
by heraldic stationers. Now the plethora of new
designs allows subdivision and classification.
Even the ladies' plate, hitherto almost without ex-
ception armorial, has arrived in sufficient num-
bers for a whole volume to be devoted to its study,
and for collectors to make it a special subject.
Among the many new plates waiting to be illus-