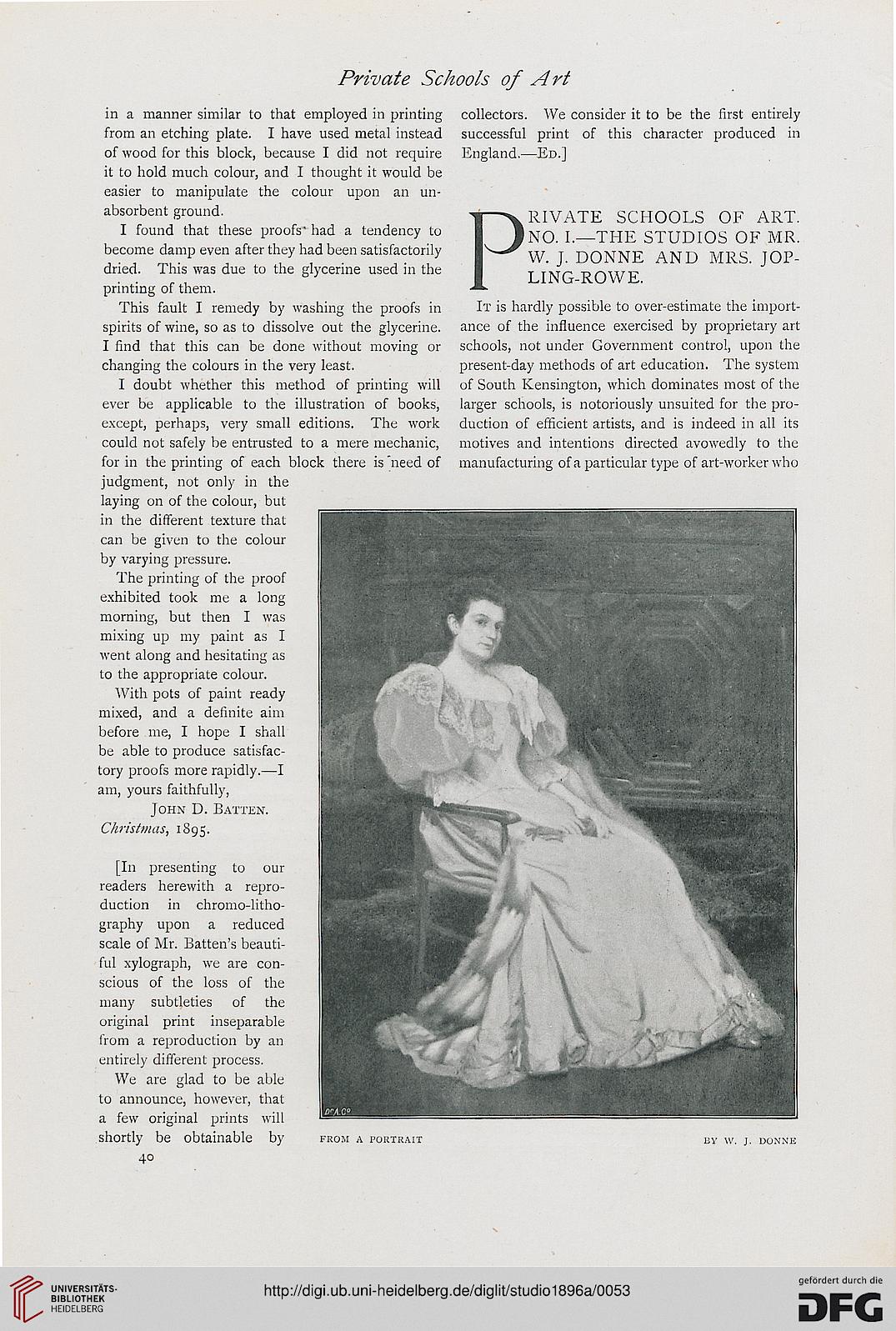 in a manner similar to that employed in printing collectors. We consider it to be the first entirely
from an etching plate. I have used metal instead successful print of this character produced in
of wood for this block, because I did not require England.—Ed.]
it to hold much colour, and I thought it would be
easier to manipulate the colour upon an un-

become damp even after they had been satisfactorily 1^"—^ W T DONNE AND MRS TOP
dried. This was due to the glycerine used in the ling ROWE

This fault i remedy by washing the proofs in It is hardly possible to over-estimate the import-
spirits of wine, so as to dissolve out the glycerine, ance of the influence exercised by proprietary art
i find that this can be done without moving or schools, not under Government control, upon the
changing the colours in the very least. present-day methods of art education. The system

I doubt whether this method of printing will of South Kensington, which dominates most of the
ever be applicable to the illustration of books, larger schools, is notoriously unsuited for the pro-
except, perhaps, very small editions. The work duction of efficient artists, and is indeed in all its
could not safely be entrusted to a mere mechanic, motives and intentions directed avowedly to the
for in the printing of each block there is "need of manufacturing of a particular type of art-worker who
judgment, not only in the
laying on of the colour, but
in the different texture that
can be given to the colour
by varying pressure.

The printing of the proof
exhibited took me a long
morning, but then I was
mixing up my paint as I
went along and hesitating as
to the appropriate colour.

With pots of paint ready
mixed, and a definite aim
before me, i hope i shall
be able to produce satisfac-
tory proofs more rapidly.—I
am, yours faithfully,

[In presenting to our
readers herewith a repro-
duction in chromo-litho-
graphy upon a reduced
scale of Mr. Batten's beauti-
ful xylograph, we are con-
scious of the loss of the
many subtleties of the
original print inseparable
from a reproduction by an
entirely different process.

We are glad to be able
to announce, however, that
a few original prints will
shortly be obtainable by from a portrait by w. j. donne