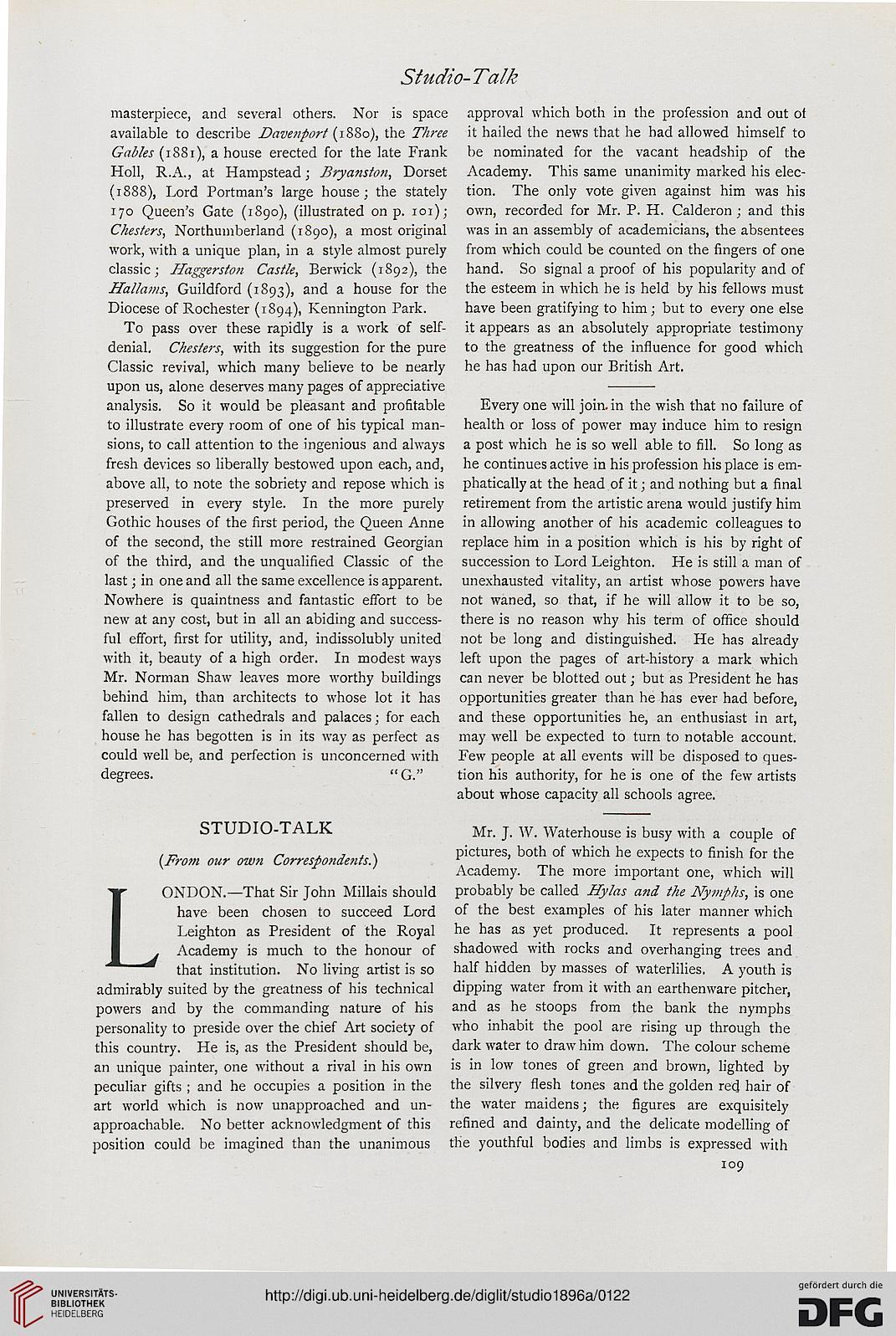 To pass over these rapidly is a work of self-
denial. Chesters, with its suggestion for the pure
Classic revival, which many believe to be nearly
upon us, alone deserves many pages of appreciative
analysis. So it would be pleasant and profitable
to illustrate every room of one of his typical man-
sions, to call attention to the ingenious and always
fresh devices so liberally bestowed upon each, and,
above all, to note the sobriety and repose which is
preserved in every style. In the more purely
Gothic houses of the first period, the Queen Anne
of the second, the still more restrained Georgian
of the third, and the unqualified Classic of the
last; in one and all the same excellence is apparent.
Nowhere is quaintness and fantastic effort to be
new at any cost, but in all an abiding and success-
ful effort, first for utility, and, indissolubly united
with it, beauty of a high order. In modest ways
Mr. Norman Shaw leaves more worthy buildings
behind him, than architects to whose lot it has
fallen to design cathedrals and palaces; for each
house he has begotten is in its way as perfect as
could well be, and perfection is unconcerned with
degrees. "G."

LONDON.—That Sir John Millais should
have been chosen to succeed Lord
Leighton as President of the Royal
Academy is much to the honour of
that institution. No living artist is so
admirably suited by the greatness of his technical
powers and by the commanding nature of his
personality to preside over the chief Art society of
this country. He is, as the President should be,
an unique painter, one without a rival in his own
peculiar gifts ; and he occupies a position in the
art world which is now unapproached and un-
approachable. No better acknowledgment of this
position could be imagined than the unanimous

approval which both in the profession and out of
it hailed the news that he had allowed himself to
be nominated for the vacant headship of the
Academy. This same unanimity marked his elec-
tion. The only vote given against him was his
own, recorded for Mr. P. H. Calderon ; and this
was in an assembly of academicians, the absentees
from which could be counted on the fingers of one
hand. So signal a proof of his popularity and of
the esteem in which he is held by his fellows must
have been gratifying to him ; but to every one else
it appears as an absolutely appropriate testimony
to the greatness of the influence for good which
he has had upon our British Art.

Every one will join, in the wish that no failure of
health or loss of power may induce him to resign
a post which he is so well able to fill. So long as
he continues active in his profession his place is em-
phatically at the head of it; and nothing but a final
retirement from the artistic arena would justify him
in allowing another of his academic colleagues to
replace him in a position which is his by right of
succession to Lord Leighton. He is still a man of
unexhausted vitality, an artist whose powers have
not waned, so that, if he will allow it to be so,
there is no reason why his term of office should
not be long and distinguished. He has already
left upon the pages of art-history a mark which
can never be blotted out; but as President he has
opportunities greater than he has ever had before,
and these opportunities he, an enthusiast in art,
may well be expected to turn to notable account.
Few people at all events will be disposed to ques-
tion his authority, for he is one of the few artists
about whose capacity all schools agree.

Mr. J. YV. Waterhouse is busy with a couple of
pictures, both of which he expects to finish for the
Academy. The more important one, which will
probably be called Hylas and the Nymphs, is one
of the best examples of his later manner which
he has as yet produced. It represents a pool
shadowed with rocks and overhanging trees and
half hidden by masses of waterlilies. A youth is
dipping water from it with an earthenware pitcher,
and as he stoops from the bank the nymphs
who inhabit the pool are rising up through the
dark water to draw him down. The colour scheme
is in low tones of green and brown, lighted by
the silvery flesh tones and the golden red hair of
the water maidens; the figures are exquisitely
refined and dainty, and the delicate modelling of
the youthful bodies and limbs is expressed with