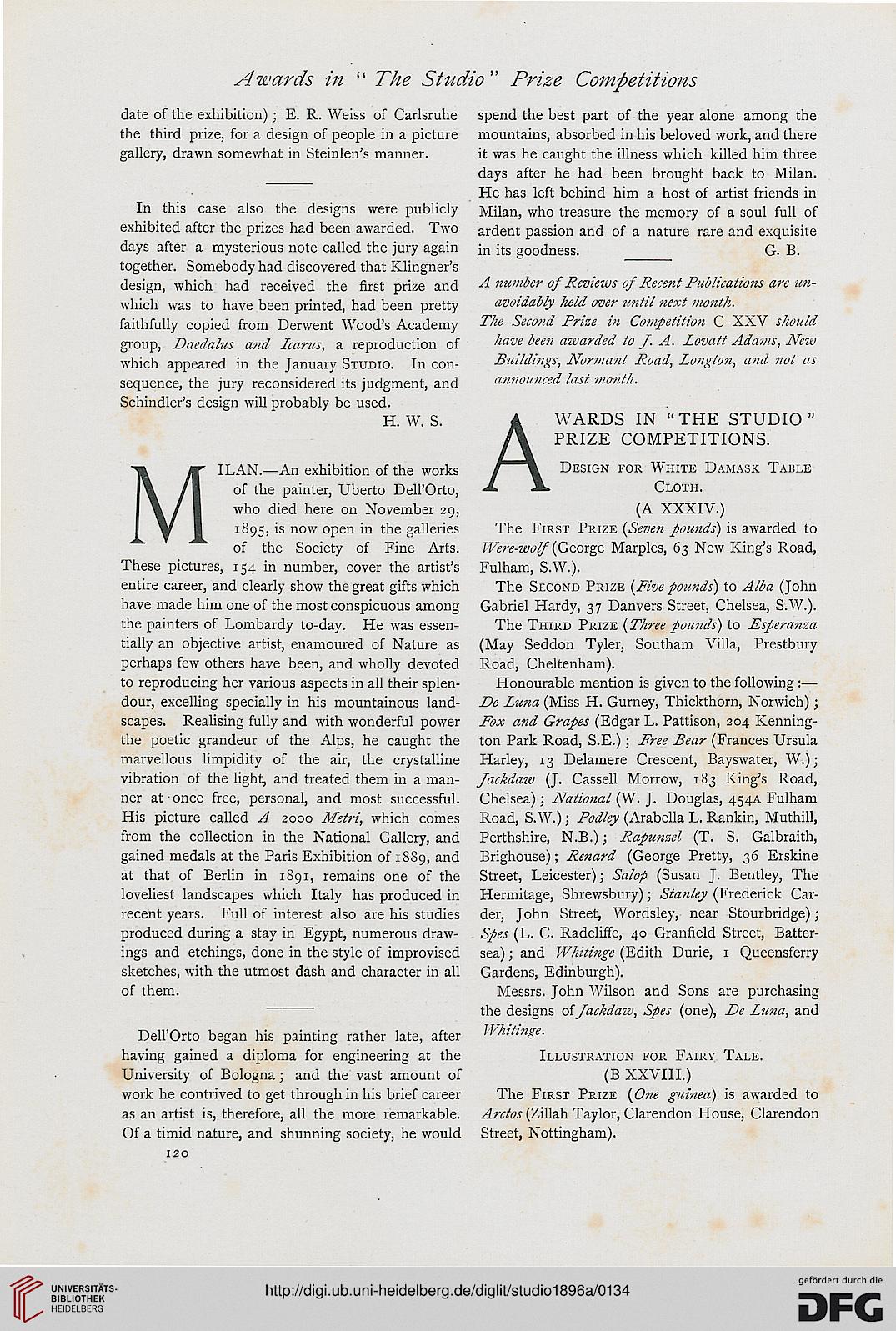 date of the exhibition) ; E. R. Weiss of Carlsruhe
the third prize, for a design of people in a picture
gallery, drawn somewhat in Steinlen's manner.

In this case also the designs were publicly
exhibited after the prizes had been awarded. Two
days after a mysterious note called the jury again
together. Somebody had discovered that Klingner's
design, which had received the first prize and
which was to have been printed, had been pretty
faithfully copied from Derwent Wood's Academy
group, Daedalus and Icarus, a reproduction of
which appeared in the January Studio. In con-
sequence, the jury reconsidered its judgment, and
Schindler's design will probably be used.

MILAN.—An exhibition of the works
of the painter, Uberto Dell'Orto,
who died here on November 29,
1895, is now open in the galleries
of the Society of Fine Arts.
These pictures, 154 in number, cover the artist's
entire career, and clearly show the great gifts which
have made him one of the most conspicuous among
the painters of Lombardy to-day. He was essen-
tially an objective artist, enamoured of Nature as
perhaps few others have been, and wholly devoted
to reproducing her various aspects in all their splen-
dour, excelling specially in his mountainous land-
scapes. Realising fully and with wonderful power
the poetic grandeur of the Alps, he caught the
marvellous limpidity of the air, the crystalline
vibration of the light, and treated them in a man-
ner at-once free, personal, and most successful.
His picture called A 2000 Metri, which comes
from the collection in the National Gallery, and
gained medals at the Paris Exhibition of 1889, and
at that of Berlin in 1891, remains one of the
loveliest landscapes which Italy has produced in
recent years. Full of interest also are his studies
produced during a stay in Egypt, numerous draw-
ings and etchings, done in the style of improvised
sketches, with the utmost dash and character in all
of them.

Dell'Orto began his painting rather late, after
having gained a diploma for engineering at the
University of Bologna; and the vast amount of
work he contrived to get through in his brief career
as an artist is, therefore, all the more remarkable.
Of a timid nature, and shunning society, he would
120

spend the best part of the year alone among the
mountains, absorbed in his beloved work, and there
it was he caught the illness which killed him three
days after he had been brought back to Milan.
He has left behind him a host of artist friends in
Milan, who treasure the memory of a soul full of
ardent passion and of a nature rare and exquisite
in its goodness. G. B.

A number of Reviews of Recent Publications are un-
avoidably held over until next month.

The Second Prize in Competition C XXV should
have been aivarded to J. A. Lovatt Adams, New
Buildings, Normaut Road, Longton, and not as
announced last month.

Messrs. John Wilson and Sons are purchasing
the designs of Jackdaw, Spes (one), De Luna, and
JVhitinge.