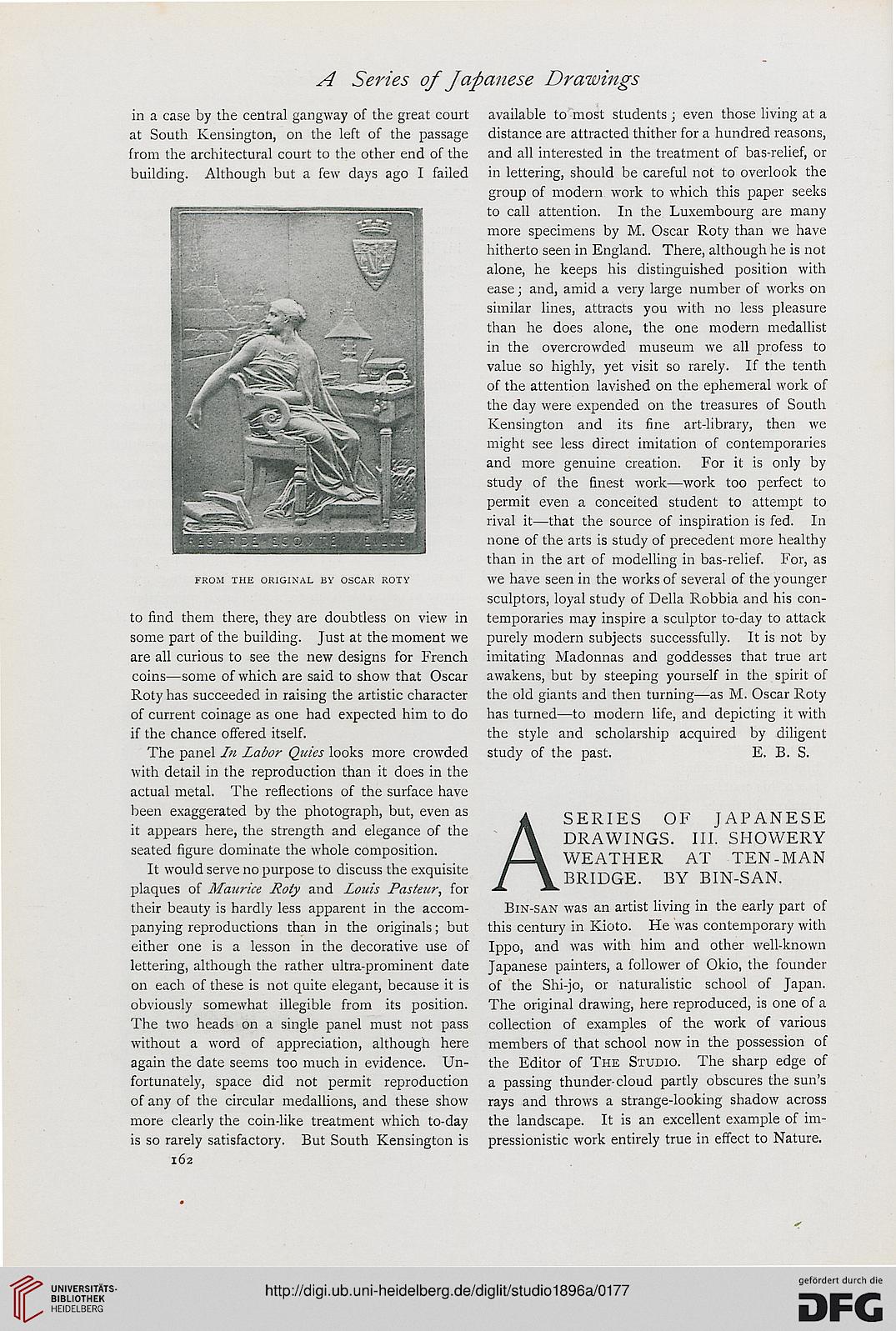 Information about OCR text
A Series of Japanese Drawings

in a case by the central gangway of the great court
at South Kensington, on the left of the passage
from the architectural court to the other end of the
building. Although but a few days ago I failed

FROM THE ORIGINAL BY OSCAR ROTY

to find them there, they are doubtless on view in
some part of the building. Just at the moment we
are all curious to see the new designs for French
coins—some of which are said to show that Oscar
Roty has succeeded in raising the artistic character
of current coinage as one had expected him to do
if the chance offered itself.

The panel In Labor Qtiies looks more crowded
with detail in the reproduction than it does in the
actual metal. The reflections of the surface have
been exaggerated by the photograph, but, even as
it appears here, the strength and elegance of the
seated figure dominate the whole composition.

It would serve no purpose to discuss the exquisite
plaques of Maurice Roiy and Louis Pasteur, for
their beauty is hardly less apparent in the accom-
panying reproductions than in the originals; but
either one is a lesson in the decorative use of
lettering, although the rather ultra-prominent date
on each of these is not quite elegant, because it is
obviously somewhat illegible from its position.
The two heads on a single panel must not pass
without a word of appreciation, although here
again the date seems too much in evidence. Un-
fortunately, space did not permit reproduction
of any of the circular medallions, and these show
more clearly the coin-like treatment which to-day
is so rarely satisfactory. But South Kensington is
162

available to most students ; even those living at a
distance are attracted thither for a hundred reasons,
and all interested in the treatment of bas-relief, or
in lettering, should be careful not to overlook the
group of modern work to which this paper seeks
to call attention. In the Luxembourg are many
more specimens by M. Oscar Roty than we have
hitherto seen in England. There, although he is not
alone, he keeps his distinguished position with
ease; and, amid a very large number of works on
similar lines, attracts you with no less pleasure
than he does alone, the one modern medallist
in the overcrowded museum we all profess to
value so highly, yet visit so rarely. If the tenth
of the attention lavished on the ephemeral work of
the day were expended on the treasures of South
Kensington and its fine art-library, then we
might see less direct imitation of contemporaries
and more genuine creation. For it is only by
study of the finest work—work too perfect to
permit even a conceited student to attempt to
rival it—that the source of inspiration is fed. In
none of the arts is study of precedent more healthy
than in the art of modelling in bas-relief. For, as
we have seen in the works of several of the younger
sculptors, loyal study of Delia Robbia and his con-
temporaries may inspire a sculptor to-day to attack
purely modern subjects successfully. It is not by
imitating Madonnas and goddesses that true art
awakens, but by steeping yourself in the spirit of
the old giants and then turning—as M. Oscar Roty
has turned—to modern life, and depicting it with
the style and scholarship acquired by diligent
study of the past. E. B. S.

Bin-san was an artist living in the early part of
this century in Kioto. He was contemporary with
Ippo, and was with him and other well-known
Japanese painters, a follower of Okio, the founder
of the Shi-jo, or naturalistic school of Japan.
The original drawing, here reproduced, is one of a
collection of examples of the work of various
members of that school now in the possession of
the Editor of The Studio. The sharp edge of
a passing thunder-cloud partly obscures the sun's
rays and throws a strange-looking shadow across
the landscape. It is an excellent example of im-
pressionistic work entirely true in effect to Nature.