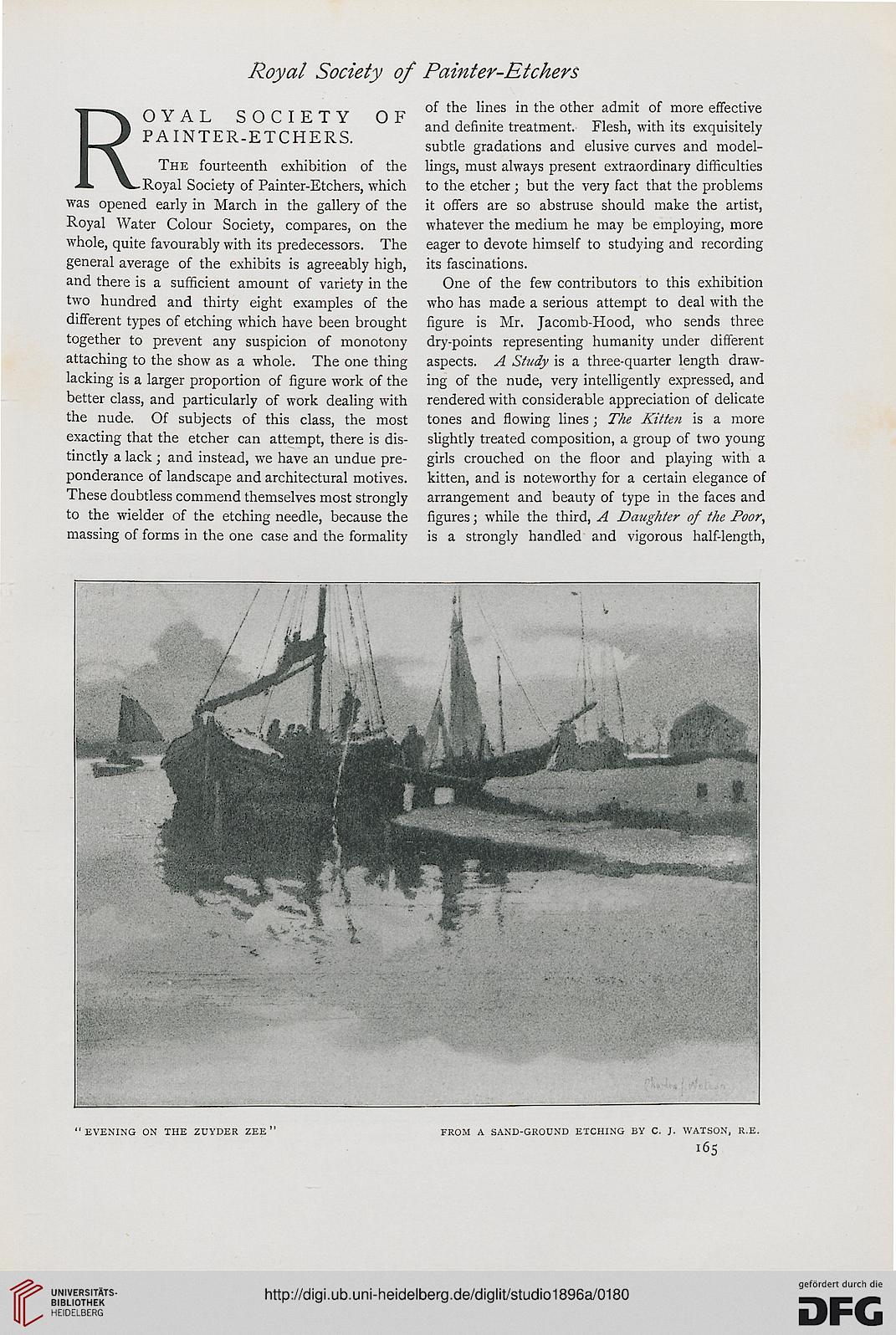 The fourteenth exhibition of the
Royal Society of Painter-Etchers, which

was opened early in March in the gallery of the
Royal Water Colour Society, compares, on the
whole, quite favourably with its predecessors. The
general average of the exhibits is agreeably high,
and there is a sufficient amount of variety in the
two hundred and thirty eight examples of the
different types of etching which have been brought
together to prevent any suspicion of monotony
attaching to the show as a whole. The one thing
lacking is a larger proportion of figure work of the
better class, and particularly of work dealing with
the nude. Of subjects of this class, the most
exacting that the etcher can attempt, there is dis-
tinctly a lack ; and instead, we have an undue pre-
ponderance of landscape and architectural motives.
These doubtless commend themselves most strongly
to the wielder of the etching needle, because the
massing of forms in the one case and the formality

of the lines in the other admit of more effective
and definite treatment. Flesh, with its exquisitely
subtle gradations and elusive curves and model-
lings, must always present extraordinary difficulties
to the etcher ; but the very fact that the problems
it offers are so abstruse should make the artist,
whatever the medium he may be employing, more
eager to devote himself to studying and recording
its fascinations.

One of the few contributors to this exhibition
who has made a serious attempt to deal with the
figure is Mr. Jacomb-Hood, who sends three
dry-points representing humanity under different
aspects. A Study is a three-quarter length draw-
ing of the nude, very intelligently expressed, and
rendered with considerable appreciation of delicate
tones and flowing lines ; The Kitte?i is a more
slightly treated composition, a group of two young
girls crouched on the floor and playing with a
kitten, and is noteworthy for a certain elegance of
arrangement and beauty of type in the faces and
figures; while the third, A Daughter of the Poor,
is a strongly handled and vigorous half-length,

EVENING ON THE ZUVDER ZEE

FROM A SAND-GROUND ETCHING BY C. J. WATSON, R.E.