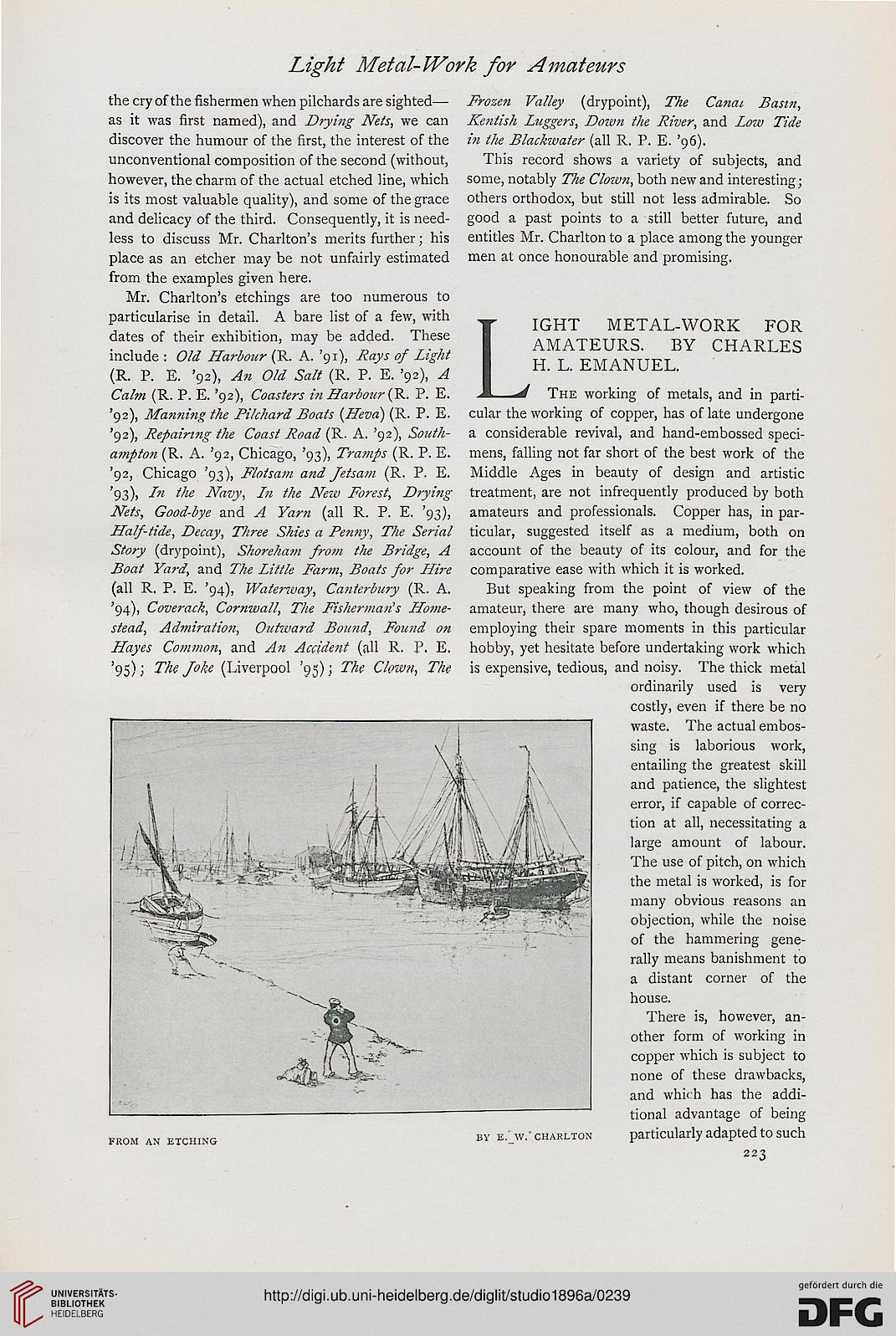 the cry of the fishermen when pilchards are sighted—
as it was first named), and Drying Nets, we can
discover the humour of the first, the interest of the
unconventional composition of the second (without,
however, the charm of the actual etched line, which
is its most valuable quality), and some of the grace
and delicacy of the third. Consequently, it is need-
less to discuss Mr. Charlton's merits further; his
place as an etcher may be not unfairly estimated
from the examples given here.

Frozen Valley (drypoint), The Canai Basin,
Kentish Luggers, Down the River, and Low Tide
in the Blackwater (all R. P. E. '96).

This record shows a variety of subjects, and
some, notably The Clown, both new and interesting;
others orthodox, but still not less admirable. So
good a past points to a still better future, and
entitles Mr. Charlton to a place among the younger
men at once honourable and promising.

The working of metals, and in parti-

cular the working of copper, has of late undergone
a considerable revival, and hand-embossed speci-
mens, falling not far short of the best work of the
Middle Ages in beauty of design and artistic
treatment, are not infrequently produced by both
amateurs and professionals. Copper has, in par-
ticular, suggested itself as a medium, both on
account of the beauty of its colour, and for the
comparative ease with which it is worked.

But speaking from the point of view of the
amateur, there are many who, though desirous of
employing their spare moments in this particular
hobby, yet hesitate before undertaking work which
is expensive, tedious, and noisy. The thick metal
ordinarily used is very
costly, even if there be no
waste. The actual embos-
sing is laborious work,
entailing the greatest skill
and patience, the slightest
error, if capable of correc-
tion at all, necessitating a
large amount of labour.
The use of pitch, on which
the metal is worked, is for
many obvious reasons an
objection, while the noise
of the hammering gene-
rally means banishment to
a distant corner of the
house.

There is, however, an-
other form of working in
copper which is subject to
none of these drawbacks,
and which has the addi-
tional advantage of being
by e.^w." charlton particularly adapted to such