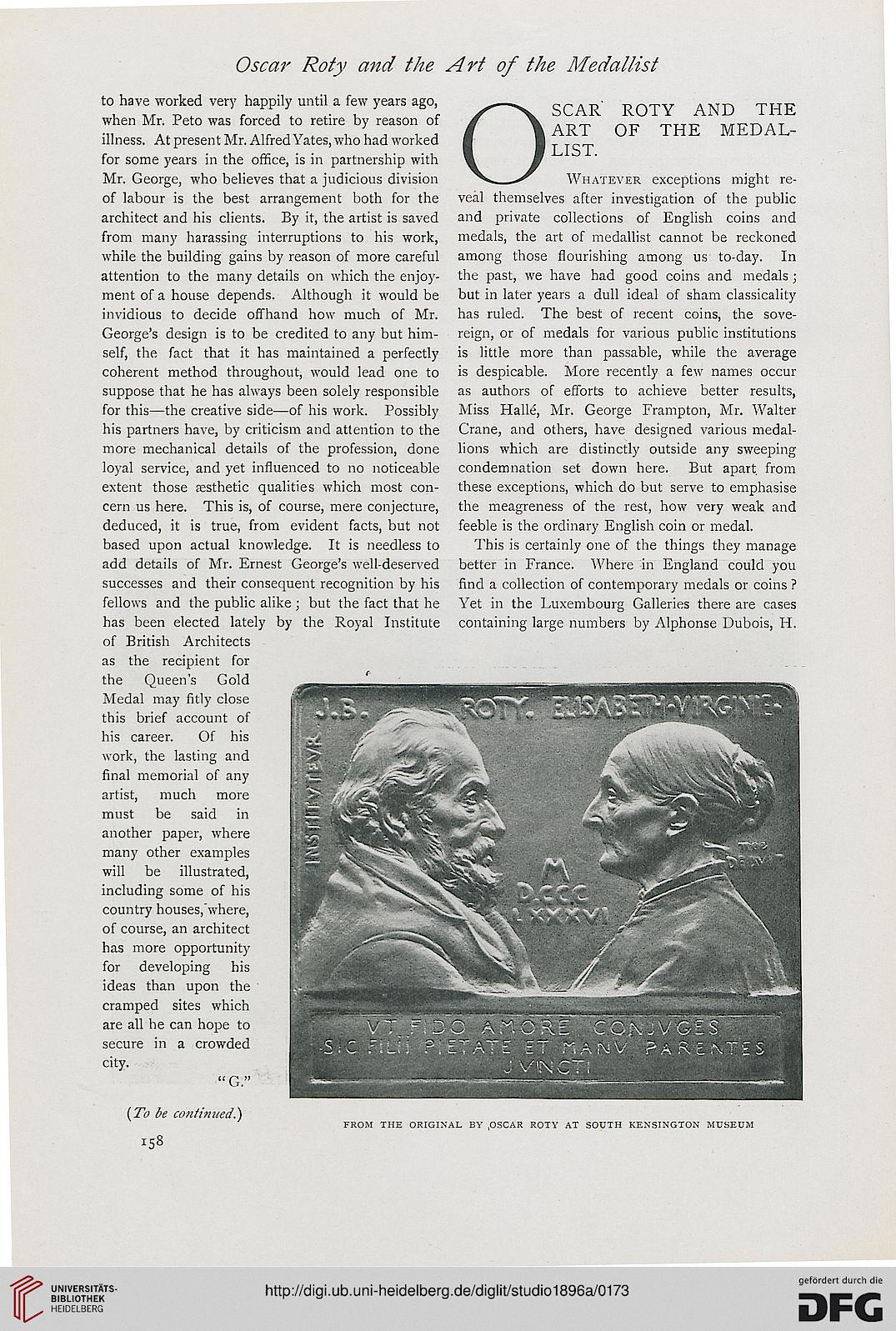 to have worked very happily until a few years ago, --SCAR ROTY AND THE

when Mr. Peto was forced to retire by reason of

illness. At present Mr. Alfred Yates, who had worked
for some years in the office, is in partnership with

Mr. George, who believes that a judicious division Whatever exceptions might re-

of labour is the best arrangement both for the veal themselves after investigation of the public
architect and his clients. By it, the artist is saved and private collections of English coins and
from many harassing interruptions to his work, medals, the art of medallist cannot be reckoned
while the building gains by reason of more careful among those flourishing among us to-day. In
attention to the many details on which the enjoy- the past, we have had good coins and medals ;
ment of a house depends. Although it would be but in later years a dull ideal of sham classicality
invidious to decide offhand how much of Mr. has ruled. The best of recent coins, the sove-
George's design is to be credited to any but him- reign, or of medals for various public institutions
self, the fact that it has maintained a perfectly is little more than passable, while the average
coherent method throughout, would lead one to is despicable. More recently a few names occur
suppose that he has always been solely responsible as authors of efforts to achieve better results,
for this—the creative side—of his work. Possibly Miss Halle, Mr. George Frampton, Mr. Walter
his partners have, by criticism and attention to the Crane, and others, have designed various medal-
more mechanical details of the profession, done lions which are distinctly outside any sweeping
loyal service, and yet influenced to no noticeable condemnation set down here. But apart from
extent those aesthetic qualities which most con- these exceptions, which do but serve to emphasise
cern us here. This is, of course, mere conjecture, the meagreness of the rest, how very weak and
deduced, it is true, from evident facts, but not feeble is the ordinary English coin or medal,
based upon actual knowledge. It is needless to This is certainly one of the things they manage
add details of Mr. Ernest George's well-deserved better in France. Where in England could you
successes and their consequent recognition by his find a collection of contemporary medals or coins ?
fellows and the public alike; but the fact that he Yet in the Luxembourg Galleries there are cases
has been elected lately by the Royal Institute containing large numbers by Alphonse Dubois, H.
of British Architects
as the recipient for
the Queen's Gold
Medal may fitly close
this brief account of
his career. Of his
work, the lasting and
final memorial of any
artist, much more
must be said in
another paper, where
many other examples
will be illustrated,
including some of his
country houses/where,
of course, an architect
has more opportunity
for developing his
ideas than upon the
cramped sites which
are all he can hope to
secure in a crowded
city.

FROM THE ORIGINAL BY .OSCAR ROTY AT SOUTH KENSINGTON" MUSEUM