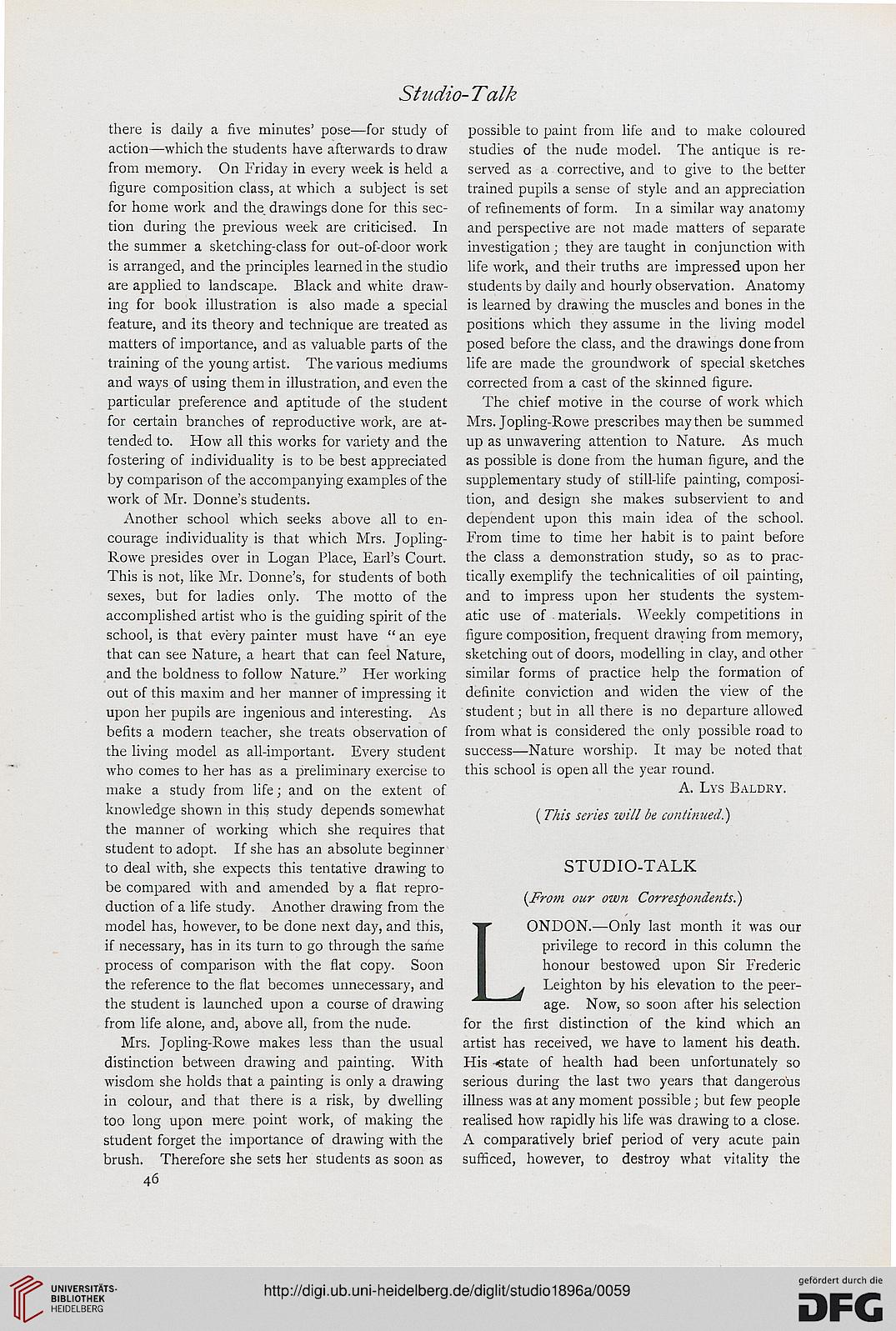 there is daily a five minutes' pose—for study of
action—which the students have afterwards to draw
from memory. On Friday in every week is held a
figure composition class, at which a subject is set
for home work and the drawings done for this sec-
tion during the previous week are criticised. In
the summer a sketching-class for out-of-door work
is arranged, and the principles learned in the studio
are applied to landscape. Black and white draw-
ing for book illustration is also made a special
feature, and its theory and technique are treated as
matters of importance, and as valuable parts of the
training of the young artist. The various mediums
and ways of using them in illustration, and even the
particular preference and aptitude of the student
for certain branches of reproductive work, are at-
tended to. How all this works for variety and the
fostering of individuality is to be best appreciated
by comparison of the accompanying examples of the
work of Mr. Donne's students.

Another school which seeks above all to en-
courage individuality is that which Mrs. Jopling-
Rowe presides over in Logan Place, Earl's Court.
This is not, like Mr. Donne's, for students of both
sexes, but for ladies only. The motto of the
accomplished artist who is the guiding spirit of the
school, is that every painter must have " an eye
that can see Nature, a heart that can feel Nature,
and the boldness to follow Nature." Her working
out of this maxim and her manner of impressing it
upon her pupils are ingenious and interesting. As
befits a modern teacher, she treats observation of
the living model as all-important. Every student
who comes to her has as a preliminary exercise to
make a study from life; and on the extent of
knowledge shown in this study depends somewhat
the manner of working which she requires that
student to adopt. If she has an absolute beginner
to deal with, she expects this tentative drawing to
be compared with and amended by a flat repro-
duction of a life study. Another drawing from the
model has, however, to be done next day, and this,
if necessary, has in its turn to go through the same
process of comparison with the flat copy. Soon
the reference to the flat becomes unnecessary, and
the student is launched upon a course of drawing
from life alone, and, above all, from the nude.

Mrs. Jopling-Rowe makes less than the usual
distinction between drawing and painting. With
wisdom she holds that a painting is only a drawing
in colour, and that there is a risk, by dwelling
too long upon mere point work, of making the
student forget the importance of drawing with the
brush. Therefore she sets her students as soon as
46

possible to paint from life and to make coloured
studies of the nude model. The antique is re-
served as a corrective, and to give to the better
trained pupils a sense of style and an appreciation
of refinements of form. In a similar way anatomy
and perspective are not made matters of separate
investigation ; they are taught in conjunction with
life work, and their truths are impressed upon her
students by daily and hourly observation. Anatomy
is learned by drawing the muscles and bones in the
positions which they assume in the living model
posed before the class, and the drawings done from
life are made the groundwork of special sketches
corrected from a cast of the skinned figure.

The chief motive in the course of work which
Mrs. Jopling-Rowe prescribes may then be summed
up as unwavering attention to Nature. As much
as possible is done from the human figure, and the
supplementary study of still-life painting, composi-
tion, and design she makes subservient to and
dependent upon this main idea of the school.
From time to time her habit is to paint before
the class a demonstration study, so as to prac-
tically exemplify the technicalities of oil painting,
and to impress upon her students the system-
atic use of materials. Weekly competitions in
figure composition, frequent drawing from memory,
sketching out of doors, modelling in clay, and other
similar forms of practice help the formation of
definite conviction and widen the view of the
student; but in all there is no departure allowed
from what is considered the only possible road to
success—Nature worship. It may be noted that
this school is open all the year round.

( This scries will be continued.)

LONDON.—Only last month it was our
privilege to record in this column the
honour bestowed upon Sir Frederic
Leighton by his elevation to the peer-
age. Now, so soon after his selection
for the first distinction of the kind which an
artist has received, we have to lament his death.
His -«tate of health had been unfortunately so
serious during the last two years that dangerous
illness was at any moment possible; but few people
realised how rapidly his life was drawing to a close.
A comparatively brief period of very acute pain
sufficed, however, to destroy what vitality the