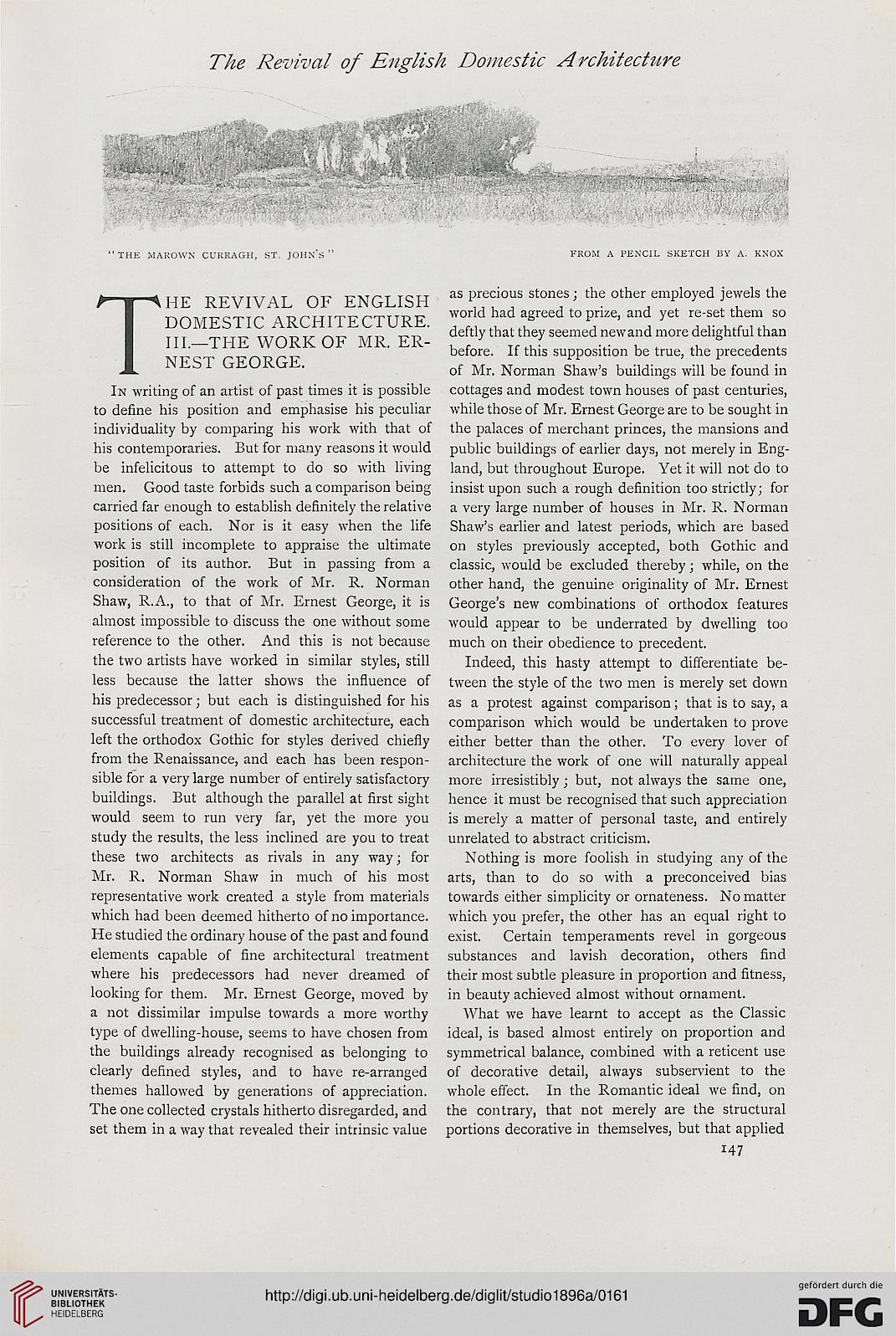 Information about OCR text
The Revival of English Domestic A rchitecture

In writing of an artist of past times it is possible
to define his position and emphasise his peculiar
individuality by comparing his work with that of
his contemporaries. But for many reasons it would
be infelicitous to attempt to do so with living
men. Good taste forbids such a comparison beiDg
carried far enough to establish definitely the relative
positions of each. Nor is it easy when the life
work is still incomplete to appraise the ultimate
position of its author. But in passing from a
consideration of the work of Mr. R. Norman
Shaw, R.A., to that of Mr. Ernest George, it is
almost impossible to discuss the one without some
reference to the other. And this is not because
the two artists have worked in similar styles, still
less because the latter shows the influence of
his predecessor; but each is distinguished for his
successful treatment of domestic architecture, each
left the orthodox Gothic for styles derived chiefly
from the Renaissance, and each has been respon-
sible for a very large number of entirely satisfactory
buildings. But although the parallel at first sight
would seem to run very far, yet the more you
study the results, the less inclined are you to treat
these two architects as rivals in any way; for
Mr. R. Norman Shaw in much of his most
representative work created a style from materials
which had been deemed hitherto of no importance.
He studied the ordinary house of the past and found
elements capable of fine architectural treatment
where his predecessors had never dreamed of
looking for them. Mr. Ernest George, moved by
a not dissimilar impulse towards a more worthy
type of dwelling-house, seems to have chosen from
the buildings already recognised as belonging to
clearly defined styles, and to have re-arranged
themes hallowed by generations of appreciation.
The one collected crystals hitherto disregarded, and
set them in a way that revealed their intrinsic value

FROM A PENCIL SKETCH BY A. KNOX

as precious stones; the other employed jewels the
world had agreed to prize, and yet re-set them so
deftly that they seemed new and more delightful than
before. If this supposition be true, the precedents
of Mr. Norman Shaw's buildings will be found in
cottages and modest town houses of past centuries,
while those of Mr. Ernest George are to be sought in
the palaces of merchant princes, the mansions and
public buildings of earlier days, not merely in Eng-
land, but throughout Europe. Yet it will not do to
insist upon such a rough definition too strictly; for
a very large number of houses in Mr. R. Norman
Shaw's earlier and latest periods, which are based
on styles previously accepted, both Gothic and
classic, would be excluded thereby; while, on the
other hand, the genuine originality of Mr. Ernest
George's new combinations of orthodox features
would appear to be underrated by dwelling too
much on their obedience to precedent.

Indeed, this hasty attempt to differentiate be-
tween the style of the two men is merely set down
as a protest against comparison; that is to say, a
comparison which would be undertaken to prove
either better than the other. To every lover of
architecture the work of one will naturally appeal
more irresistibly ; but, not always the same one,
hence it must be recognised that such appreciation
is merely a matter of personal taste, and entirely
unrelated to abstract criticism.

Nothing is more foolish in studying any of the
arts, than to do so with a preconceived bias
towards either simplicity or ornateness. No matter
which you prefer, the other has an equal right to
exist. Certain temperaments revel in gorgeous
substances and lavish decoration, others find
their most subtle pleasure in proportion and fitness,
in beauty achieved almost without ornament.

What we have learnt to accept as the Classic
ideal, is based almost entirely on proportion and
symmetrical balance, combined with a reticent use
of decorative detail, always subservient to the
whole effect. In the Romantic ideal we find, on
the contrary, that not merely are the structural
portions decorative in themselves, but that applied