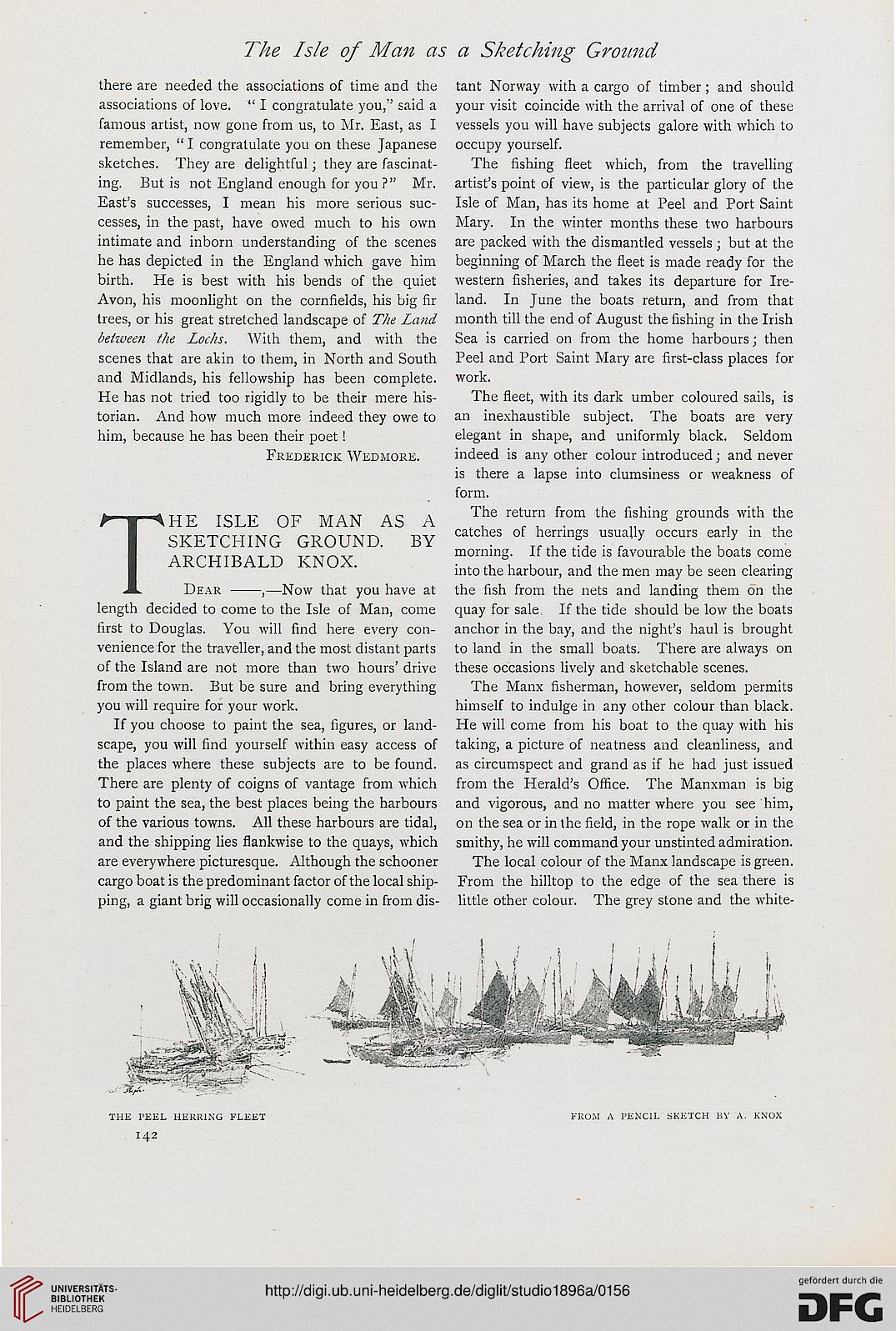 there are needed the associations of time and the tant Norway with a cargo of timber ; and should

associations of love. " I congratulate you," said a your visit coincide with the arrival of one of these

famous artist, now gone from us, to Mr. East, as I vessels you will have subjects galore with which to

remember, " I congratulate you on these Japanese occupy yourself.

sketches. They are delightful; they are fascinat- The fishing fleet which, from the travelling
ing. But is not England enough for you?" Mr. artist's point of view, is the particular glory of the
East's successes, I mean his more serious sue- Isle of Man, has its home at Peel and Port Saint
cesses, in the past, have owed much to his own Mary. In the winter months these two harbours
intimate and inborn understanding of the scenes are packed with the dismantled vessels ; but at the
he has depicted in the England which gave him beginning of March the fleet is made ready for the
birth. He is best with his bends of the quiet western fisheries, and takes its departure for Ire-
Avon, his moonlight on the cornfields, his big fir land. In June the boats return, and from that
trees, or his great stretched landscape of The Land month till the end of August the fishing in the Irish
between the Lochs. With them, and with the Sea is carried on from the home harbours; then
scenes that are akin to them, in North and South Peel and Port Saint Mary are first-class places for
and Midlands, his fellowship has been complete, work.

He has not tried too rigidly to be their mere his- The fleet, with its dark umber coloured sails, is

torian. And how much more indeed they owe to an inexhaustible subject. The boats are very

him, because he has been their poet! elegant in shape, and uniformly black. Seldom

Frederick Wedmore. indeed is any other colour introduced; and never

is there a lapse into clumsiness or weakness of

SKETCHING GROUND. BY CatcheS US"al y 111 the
morning. If the tide is favourable the boats come

Dear -,—Now that you have at the fish from the nets and landing them on the

length decided to come to the Isle of Man, come quay for sale If the tide should be low the boats

first to Douglas. You will find here every con- anchor in the bay, and the night's haul is brought

venience for the traveller, and the most distant parts to land in the small boats. There are always on

of the Island are not more than two hours' drive these occasions lively and sketchable scenes,

from the town. But be sure and bring everything The Manx fisherman, however, seldom permits

you will require for your work. himself to indulge in any other colour than black.

If you choose to paint the sea, figures, or land- He will come from his boat to the quay with his

scape, you will find yourself within easy access of taking, a picture of neatness and cleanliness, and

the places where these subjects are to be found, as circumspect and grand as if he had just issued

There are plenty of coigns of vantage from which from the Herald's Office. The Manxman is big

to paint the sea, the best places being the harbours and vigorous, and no matter where you see him,

of the various towns. All these harbours are tidal, on the sea or in the field, in the rope walk or in the

and the shipping lies flankwise to the quays, which smithy, he will command your unstinted admiration,

are everywhere picturesque. Although the schooner The local colour of the Manx landscape is green,

ping, a giant brig will occasionally come in from dis- little other colour. The grey stone and the white-

FROM A I'EJs'CIL SKETCH BY A. KNOX