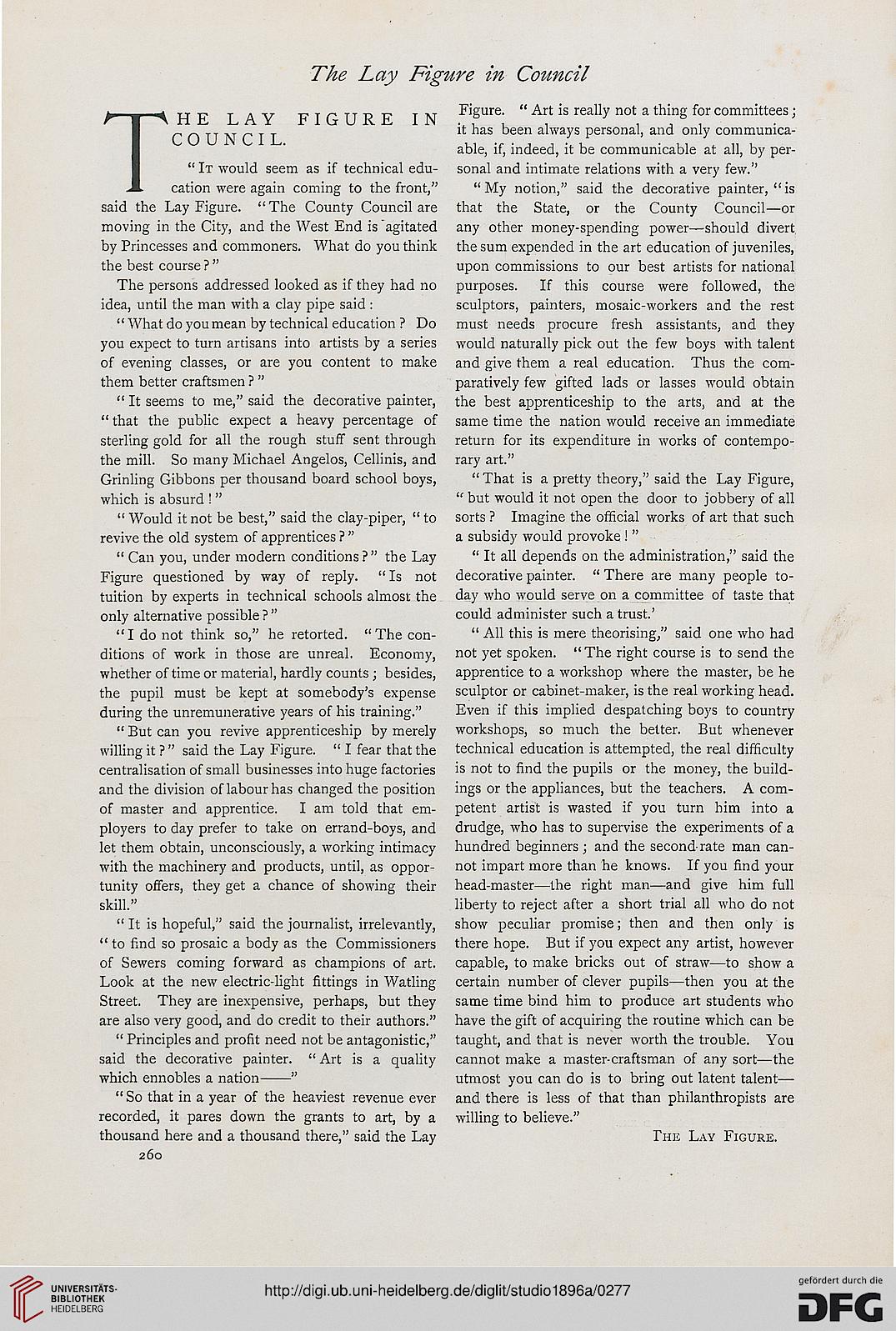 Information about OCR text
The Lay Figure in Council

THE LAY FIGURE IN
COUNCIL.
" It would seem as if technical edu-
cation were again coming to the front,"
said the Lay Figure. "The County Council are
moving in the City, and the West End is agitated
by Princesses and commoners. What do you think
the best course ? "

The persons addressed looked as if they had no
idea, until the man with a clay pipe said :

" What do you mean by technical education ? Do
you expect to turn artisans into artists by a series
of evening classes, or are you content to make
them better craftsmen ? "

" It seems to me," said the decorative painter,
" that the public expect a heavy percentage of
sterling gold for all the rough stuff sent through
the mill. So many Michael Angelos, Cellinis, and
Grinling Gibbons per thousand board school boys,
which is absurd ! "

" Would it not be best," said the clay-piper, " to
revive the old system of apprentices ? "

" Can you, under modern conditions ? " the Lay
Figure questioned by way of reply. " Is not
tuition by experts in technical schools almost the
only alternative possible ? "

"I do not think so," he retorted. " The con-
ditions of work in those are unreal. Economy,
whether of time or material, hardly counts ; besides,
the pupil must be kept at somebody's expense
during the unremunerative years of his training."

" But can you revive apprenticeship by merely
willing it ? " said the Lay Figure. " I fear that the
centralisation of small businesses into huge factories
and the division of labour has changed the position
of master and apprentice. I am told that em-
ployers to day prefer to take on errand-boys, and
let them obtain, unconsciously, a working intimacy
with the machinery and products, until, as oppor-
tunity offers, they get a chance of showing their
skill."

" It is hopeful," said the journalist, irrelevantly,
" to find so prosaic a body as the Commissioners
of Sewers coming forward as champions of art.
Look at the new electric-light fittings in Watling
Street. They are inexpensive, perhaps, but they
are also very good, and do credit to their authors."

" Principles and profit need not be antagonistic,"
said the decorative painter. " Art is a quality
which ennobles a nation-"

"So that in a year of the heaviest revenue ever
recorded, it pares down the grants to art, by a
thousand here and a thousand there," said the Lay
260

Figure. " Art is really not a thing for committees;
it has been always personal, and only communica-
able, if, indeed, it be communicable at all, by per-
sonal and intimate relations with a very few."

"My notion," said the decorative painter, "is
that the State, or the County Council—or
any other money-spending power—should divert
the sum expended in the art education of juveniles,
upon commissions to our best artists for national
purposes. If this course were followed, the
sculptors, painters, mosaic-workers and the rest
must needs procure fresh assistants, and they
would naturally pick out the few boys with talent
and give them a real education. Thus the com-
paratively few gifted lads or lasses would obtain
the best apprenticeship to the arts, and at the
same time the nation would receive an immediate
return for its expenditure in works of contempo-
rary art."

" That is a pretty theory," said the Lay Figure,
" but would it not open the door to jobbery of all
sorts ? Imagine the official works of art that such
a subsidy would provoke ! "

" It all depends on the administration," said the
decorative painter. " There are many people to-
day who would serve on a committee of taste that
could administer such a trust'

" All this is mere theorising/' said one who had
not yet spoken. "The right course is to send the
apprentice to a workshop where the master, be he
sculptor or cabinet-maker, is the real working head.
Even if this implied despatching boys to country
workshops, so much the better. But whenever
technical education is attempted, the real difficulty
is not to find the pupils or the money, the build-
ings or the appliances, but the teachers. A com-
petent artist is wasted if you turn him into a
drudge, who has to supervise the experiments of a
hundred beginners; and the second-rate man can-
not impart more than he knows. If you find your
head-master—the right man—and give him full
liberty to reject after a short trial all who do not
show peculiar promise; then and then only is
there hope. But if you expect any artist, however
capable, to make bricks out of straw—to show a
certain number of clever pupils—then you at the
same time bind him to produce art students who
have the gift of acquiring the routine which can be
taught, and that is never worth the trouble. You
cannot make a master-craftsman of any sort—the
utmost you can do is to bring out latent talent—
and there is less of that than philanthropists are
willing to believe."