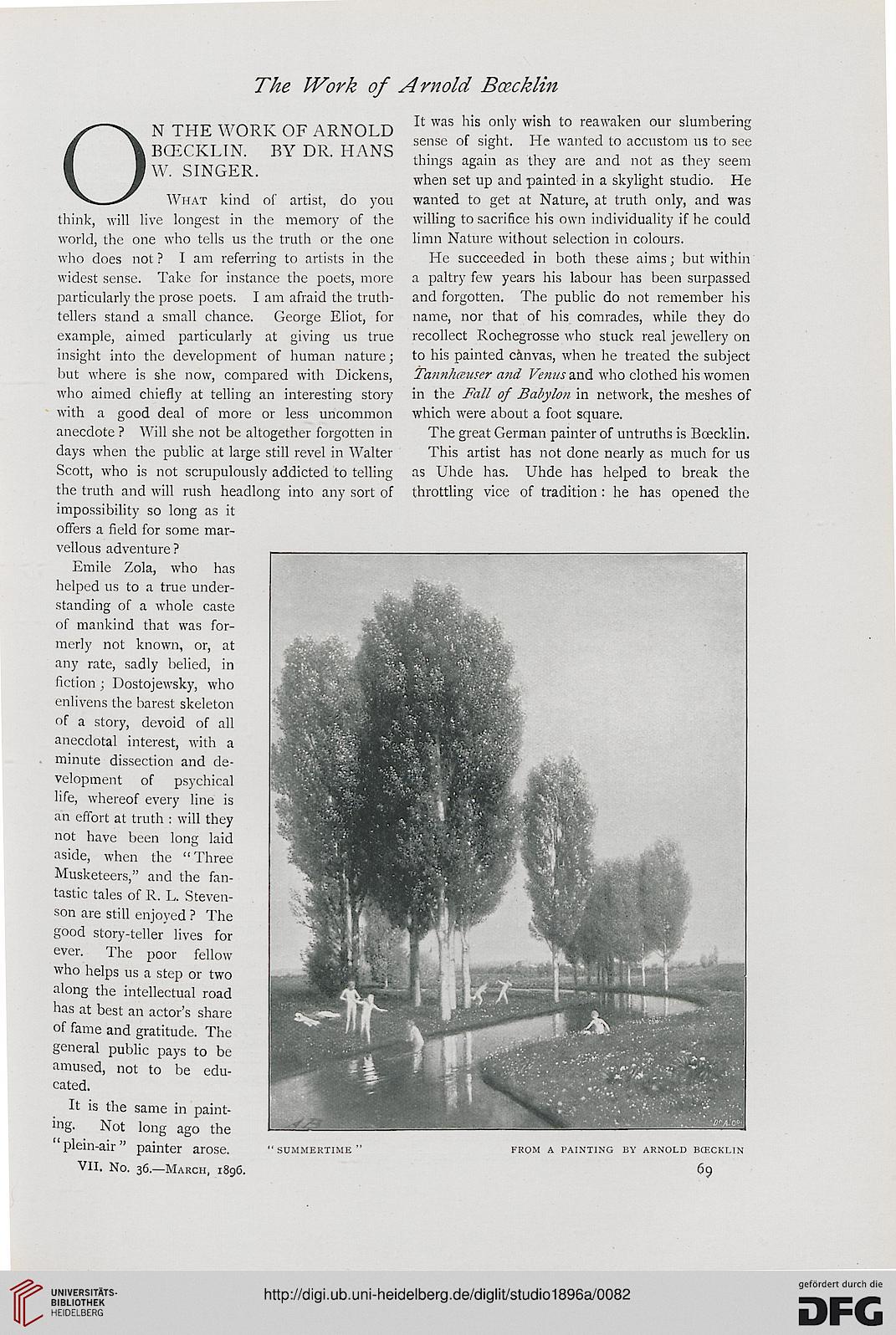 Information about OCR text
The Work of Arnold Bcecklin

ON THE WORK OF ARNOLD lt waS f °"ly t0 r,Taken °Ufr slumteinS
BCECKLIN. BY DR. HANS ^Se °f S:ght' "e Wa"ted l? M" t0 See
SINGER tilings again as they are and not as they seem

v' when set up and painted in a skylight studio. He

What kind of artist, do you wanted to get at Nature, at truth only, and was
think, will live longest in the memory of the willing to sacrifice his own individuality if he could
world, the one who tells us the truth or the one limn Nature without selection in colours,
who does not? I am referring to artists in the He succeeded in both these aims; but within
widest sense. Take for instance the poets, more a paltry few years his labour has been surpassed
particularly the prose poets. I am afraid the truth- and forgotten. The public do not remember his
tellers stand a small chance. George Eliot, for name, nor that of his comrades, while they do
example, aimed particularly at giving us true recollect Rochegrosse who stuck real jewellery on
insight into the development of human nature; to his painted canvas, when he treated the subject
but where is she now, compared with Dickens, Ta?inh<Tuser and Venus and who clothed his women
who aimed chiefly at telling an interesting story in the Fall of Babylon in network, the meshes of
with a good deal of more or less uncommon which were about a foot square,
anecdote ? Will she not be altogether forgotten in The great German painter of untruths is Bcecklin.
days when the public at large still revel in Walter This artist has not done nearly as much for us
Scott, who is not scrupulously addicted to telling as Uhde has. Uhde has helped to break the
the truth and will rush headlong into any sort of throttling vice of tradition : he has opened the
impossibility so long as it
offers a field for some mar-
vellous adventure ?

Emile Zola, who has
helped us to a true under-
standing of a whole caste
of mankind that was for-
merly not known, or, at
any rate, sadly belied, in
fiction ; Dostojewsky, who
enlivens the barest skeleton
of a story, devoid of all
anecdotal interest, with a
minute dissection and de-
velopment of psychical
life, whereof every line is
an effort at truth : will they
not have been long laid
aside, when the "Three
Musketeers," and the fan-
tastic tales of R. L. Steven-
son are still enjoyed ? The
good story-teller lives for
ever. The poor fellow
who helps us a step or two
along the intellectual road
has at best an actor's share
of fame and gratitude. The
general public pays to be
amused, not to be edu-
cated.

It is the same in paint-
ing. Not long ago the
plein-air" painter arose. "summertime" from a painting by arnold bcecklin