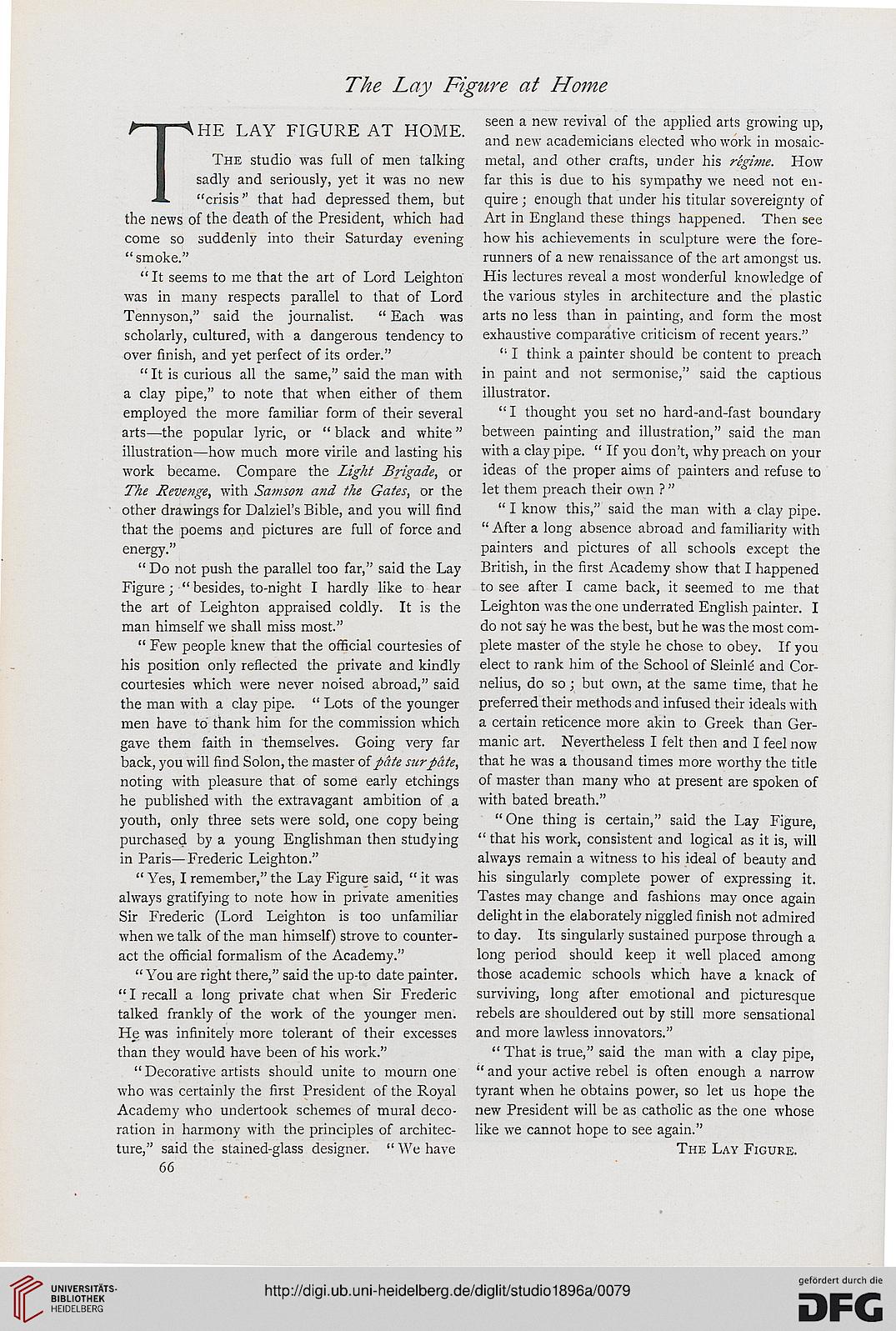 THE LAY FIGURE AT HOME.
The studio was full of men talking
sadly and seriously, yet it was no new
"crisis" that had depressed them, but
the news of the death of the President, which had
come so suddenly into their Saturday evening
"smoke."

" It seems to me that the art of Lord Leighton
was in many respects parallel to that of Lord
Tennyson," said the journalist. " Each was
scholarly, cultured, with a dangerous tendency to
over finish, and yet perfect of its order."

" It is curious all the same," said the man with
a clay pipe," to note that when either of them
employed the more familiar form of their several
arts—-the popular lyric, or " black and white"
illustration—how much more virile and lasting his
work became. Compare the Light Brigade, or
The Revenge, with Samson and the Gates, or the
other drawings for Dalziel's Bible, and you will find
that the poems and pictures are full of force and
energy."

"Do not push the parallel too far," said the Lay
Figure; " besides, to-night I hardly like to hear
the art of Leighton appraised coldly. It is the
man himself we shall miss most."

" Few people knew that the official courtesies of
his position only reflected the private and kindly
courtesies which were never noised abroad," said
the man with a clay pipe. " Lots of the younger
men have to thank him for the commission which
gave them faith in themselves. Going very far
back, you will find Solon, the master of pate surfiate,
noting with pleasure that of some early etchings
he published with the extravagant ambition of a
youth, only three sets were sold, one copy being
purchased by a young Englishman then studying
in Paris—Frederic Leighton."

" Yes, I remember," the Lay Figure said, " it was
always gratifying to note how in private amenities
Sir Frederic (Lord Leighton is too unfamiliar
when we talk of the man himself) strove to counter-
act the official formalism of the Academy."

"You are right there," said the up-to date painter.
" I recall a long private chat when Sir Frederic
talked frankly of the work of the younger men.
He was infinitely more tolerant of their excesses
than they would have been of his work."

" Decorative artists should unite to mourn one
who was certainly the first President of the Royal
Academy who undertook schemes of mural deco-
ration in harmony with the principles of architec-
ture," said the stained-glass designer. " We have
66

seen a new revival of the applied arts growing up,
and new academicians elected who work in mosaic-
metal, and other crafts, under his regime. How
far this is due to his sympathy we need not en-
quire ; enough that under his titular sovereignty of
Art in England these things happened. Then see
how his achievements in sculpture were the fore-
runners of a new renaissance of the art amongst us.
His lectures reveal a most wonderful knowledge of
the various styles in architecture and the plastic
arts no less than in painting, and form the most
exhaustive comparative criticism of recent years."

" I think a painter should be content to preach
in paint and not sermonise," said the captious
illustrator.

" I thought you set no hard-and-fast boundary
between painting and illustration," said the man
with a clay pipe. " If you don't, why preach on your
ideas of the proper aims of painters and refuse to
let them preach their own ? "

" I know this," said the man with a clay pipe.
" After a long absence abroad and familiarity with
painters and pictures of all schools except the
British, in the first Academy show that I happened
to see after I came back, it seemed to me that
Leighton was the one underrated English painter. I
do not say he was the best, but he was the most com-
plete master of the style he chose to obey. If you
elect to rank him of the School of Sleinle' and Cor-
nelius, do so ; but own, at the same time, that he
preferred their methods and infused their ideals with
a certain reticence more akin to Greek than Ger-
manic art. Nevertheless I felt then and I feel now
that he was a thousand times more worthy the title
of master than many who at present are spoken of
with bated breath."

" One thing is certain," said the Lay Figure,
" that his work, consistent and logical as it is, will
always remain a witness to his ideal of beauty and
his singularly complete power of expressing it.
Tastes may change and fashions may once again
delight in the elaborately niggled finish not admired
to day. Its singularly sustained purpose through a
long period should keep it well placed among
those academic schools which have a knack of
surviving, long after emotional and picturesque
rebels are shouldered out by still more sensational
and more lawless innovators."

" That is true," said the man with a clay pipe,
" and your active rebel is often enough a narrow
tyrant when he obtains power, so let us hope the
new President will be as catholic as the one whose
like we cannot hope to see again."