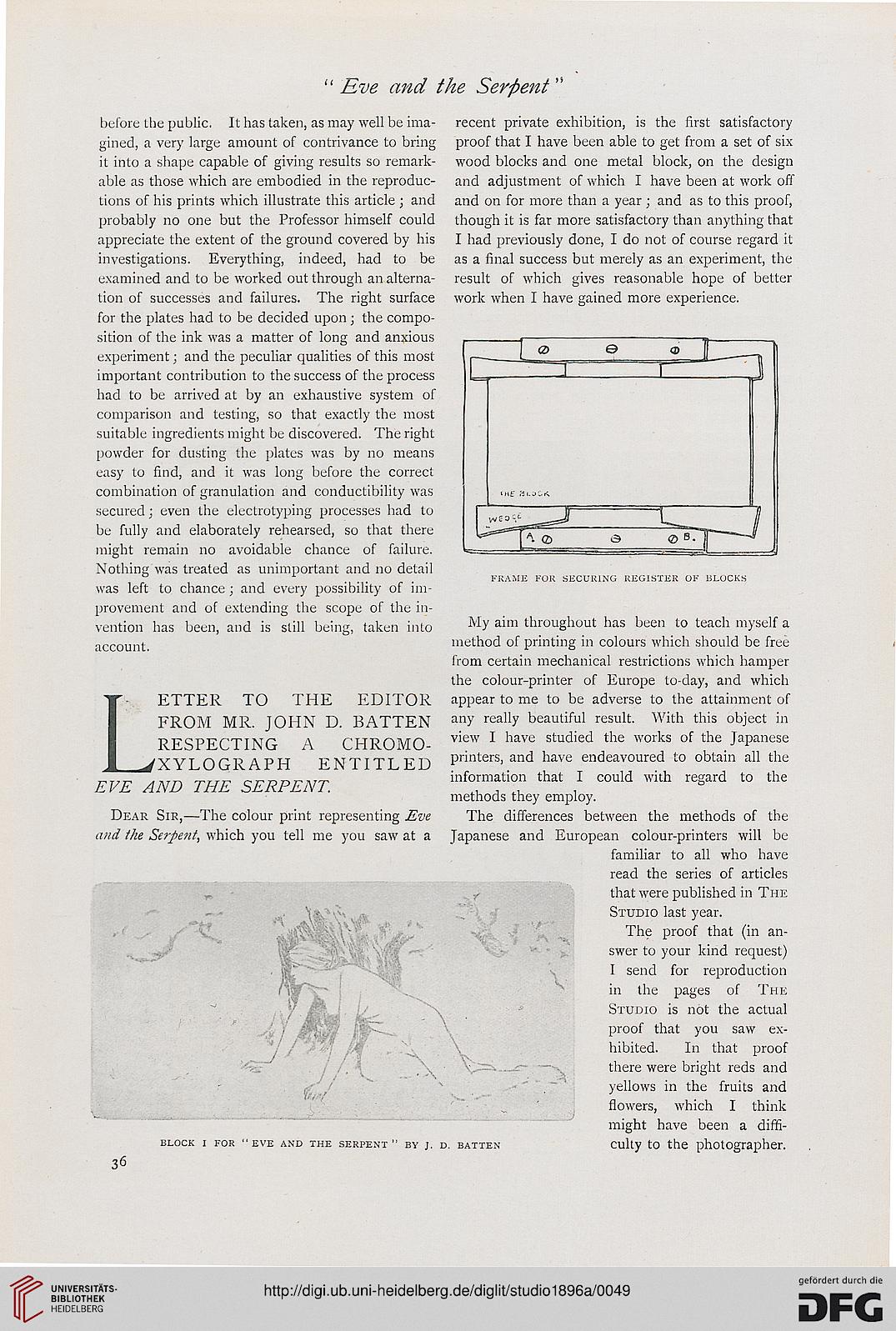 Information about OCR text
" Eve and the Sevfient "

before the public. It has taken, as may well be ima- recent private exhibition, is the first satisfactory
gined, a very large amount of contrivance to bring proof that I have been able to get from a set of six
it into a shape capable of giving results so remark- wood blocks and one metal block, on the design
able as those which are embodied in the reproduc- and adjustment of which I have been at work off
tions of his prints which illustrate this article ; and and on for more than a year ; and as to this proof,
probably no one but the Professor himself could though it is far more satisfactory than anything that
appreciate the extent of the ground covered by his I had previously done, I do not of course regard it
investigations. Everything, indeed, had to be as a final success but merely as an experiment, the
examined and to be worked out through an alterna- result of which gives reasonable hope of better
tion of successes and failures. The right surface work when I have gained more experience,
for the plates had to be decided upon ; the compo-
sition of the ink was a matter of long and anxious
experiment; and the peculiar qualities of this most
important contribution to the success of the process
had to be arrived at by an exhaustive system of
comparison and testing, so that exactly the most
suitable ingredients might be discovered. The right
powder for dusting the plates was by no means
easy to find, and it was long before the correct
combination of granulation and conductibility was
secured; even the electrotyping processes had to
be fully and elaborately rehearsed, so that there
might remain no avoidable chance of failure.
Nothing was treated as unimportant and no detail
was left to chance ; and every possibility of im-
provement and of extending the scope of the in-
vention has been, and is still being, taken into My aim throughout has been to teach myself a
account method of printing in colours which should be free

from certain mechanical restrictions which hamper

FRAME FOR SECURING REGISTER OF ULUCKS

the colour-printer of Europe to-day, and which
ETTER TO THE EDITOR appear to me to be adverse to the attainment of
FROM MR JOHN D BATTEN an>' reaHy beautiful result. With this object in
RESPECTING A CHROMO v'ew I have studied the works of the Japanese
XYLOGRAPH ENTITLED Pinters, and have endeavoured to obtain all the

EVE AND THE SERPENT.

information that I could with regard to the
methods they employ.

Dear Sir,—The colour print representing Eve The differences between the methods of the
and the Serpent, which you tell me you saw at a Japanese and European colour-printers will be

familiar to all who have
read the series of articles
that were published in The
Studio last year.

proof that you saw ex-
hibited. In that proof
there were bright reds and
yellows in the fruits and
flowers, which I think
might have been a diffi-

BLOCK 1 FOR "EVE AND THE SERPENT" BY J. D. BATTEN Culty tO the photographer.