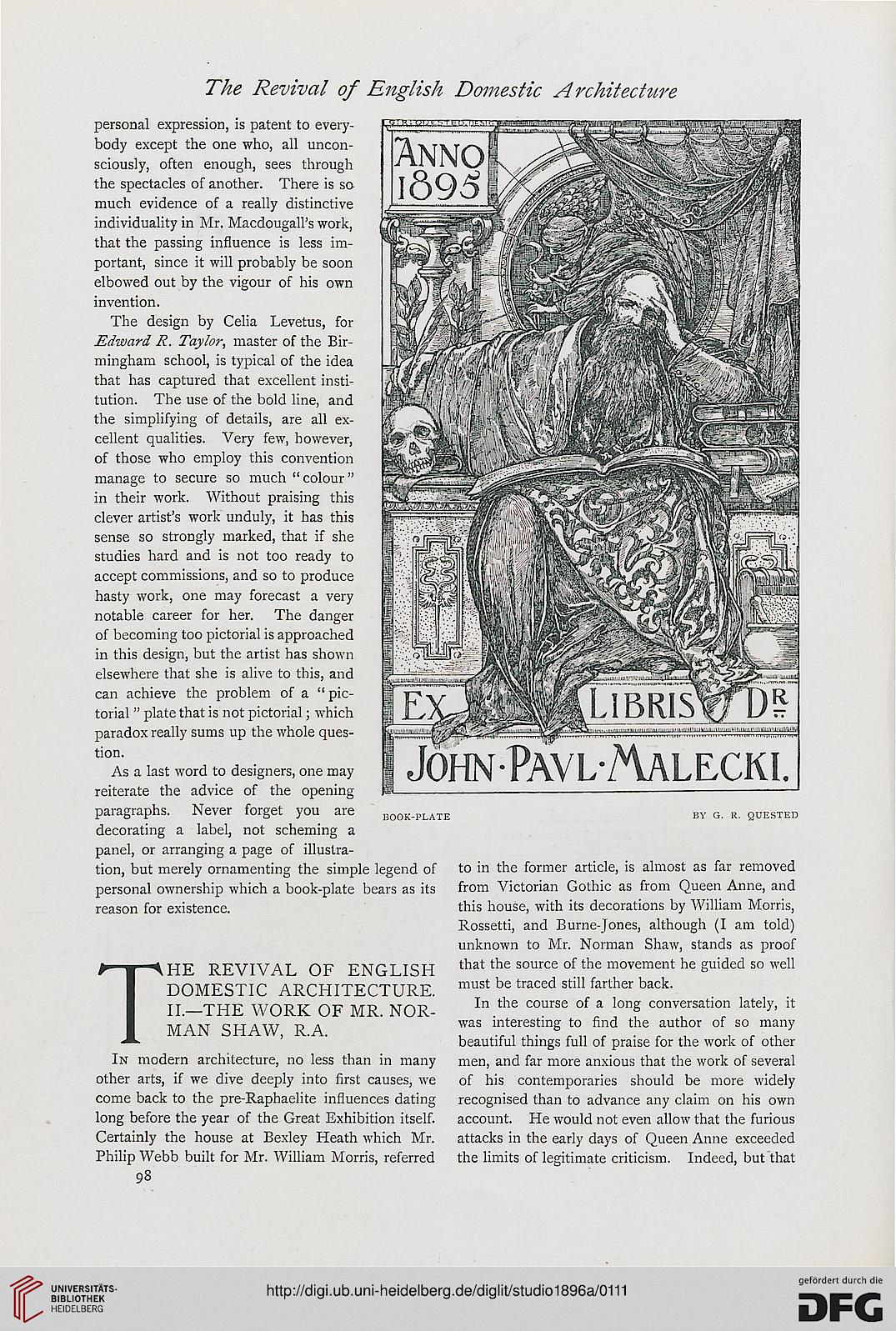 Information about OCR text
The Revival of English Domestic Architecture

personal expression, is patent to every-
body except the one who, all uncon-
sciously, often enough, sees through
the spectacles of another. There is so
much evidence of a really distinctive
individuality in Mr. Macdougall's work,
that the passing influence is less im-
portant, since it will probably be soon
elbowed out by the vigour of his own
invention.

The design by Celia Levetus, for
Edward R. Taylor, master of the Bir-
mingham school, is typical of the idea
that has captured that excellent insti-
tution. The use of the bold line, and
the simplifying of details, are all ex-
cellent qualities. Very few, however,
of those who employ this convention
manage to secure so much "colour"
in their work. Without praising this
clever artist's work unduly, it has this
sense so strongly marked, that if she
studies hard and is not too ready to
accept commissions, and so to produce
hasty work, one may forecast a very
notable career for her. The danger
of becoming too pictorial is approached
in this design, but the artist has shown
elsewhere that she is alive to this, and
can achieve the problem of a "pic-
torial " plate that is not pictorial; which
paradox really sums up the whole ques-
tion.

As a last word to designers, one may
reiterate the advice of the opening
paragraphs. Never forget you are book-plate by g. r. quested

decorating a label, not scheming a
panel, or arranging a page of illustra-
tion, but merely ornamenting the simple legend of to in the former article, is almost as far removed
personal ownership which a book-plate bears as its from Victorian Gothic as from Queen Anne, and
reason for existence. this house, with its decorations by William Morris,

Rossetti, and Burne-Jones, although (I am told)
unknown to Mr. Norman Shaw, stands as proof

THE REVIVAL OF ENGLISH t^iat: source °ftne movement he guided so well
DOMESTIC ARCHITECTURE. must be traced still farther back,
j j_THE WORK OF MR NOR In the course of a lon& conversation lately, it
MAN SHAW F A waS mterestmS t0 nn<^ tne auth°r of so many

beautiful things full of praise for the work of other
In modern architecture, no less than in many men, and far more anxious that the work of several
other arts, if we dive deeply into first causes, we of his contemporaries should be more widely
come back to the pre-Raphaelite influences dating recognised than to advance any claim on his own
long before the year of the Great Exhibition itself. account. He would not even allow that the furious
Certainly the house at Bexley Heath which Mr. attacks in the early days of Queen Anne exceeded
Philip Webb built for Mr. William Morris, referred the limits of legitimate criticism. Indeed, but that
98