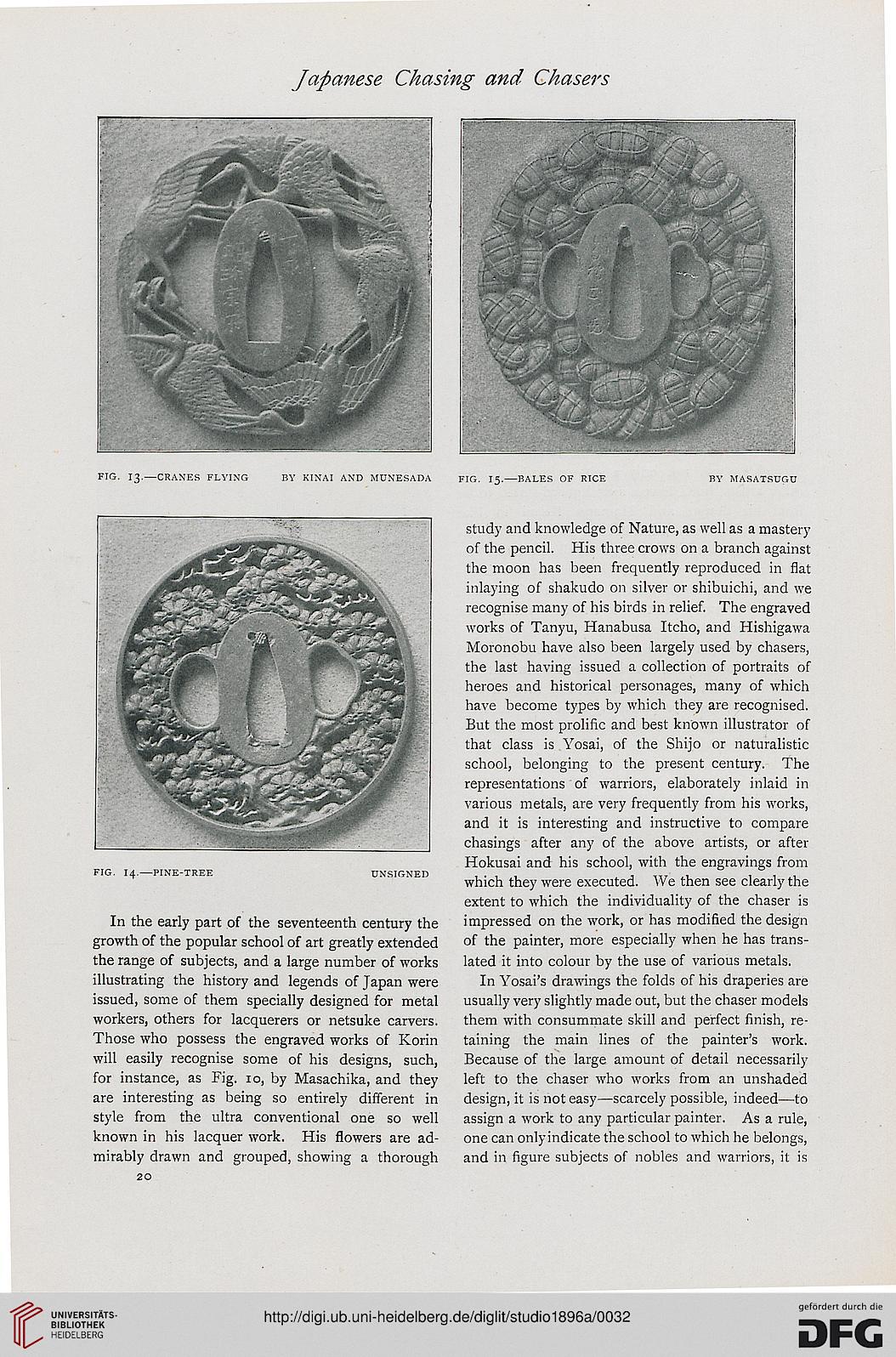 In the early part of the seventeenth century the
growth of the popular school of art greatly extended
the range of subjects, and a large number of works
illustrating the history and legends of Japan were
issued, some of them specially designed for metal
workers, others for lacquerers or netsuke carvers.
Those who possess the engraved works of Korin
will easily recognise some of his designs, such,
for instance, as Fig. 10, by Masachika, and they
are interesting as being so entirely different in
style from the ultra conventional one so well
known in his lacquer work. His flowers are ad-
mirably drawn and grouped, showing a thorough
20

FIG. 15.—BALES OF RICE BY MASATSUGU

study and knowledge of Nature, as well as a mastery
of the pencil. His three crows on a branch against
the moon has been frequently reproduced in flat
inlaying of shakudo on silver or shibuichi, and we
recognise many of his birds in relief. The engraved
works of Tanyu, Hanabusa Itcho, and Hishigawa
Moronobu have also been largely used by chasers,
the last having issued a collection of portraits of
heroes and historical personages, many of which
have become types by which they are recognised.
But the most prolific and best known illustrator of
that class is Yosai, of the Shijo or naturalistic
school, belonging to the present century. The
representations of warriors, elaborately inlaid in
various metals, are very frequently from his works,
and it is interesting and instructive to compare
chasings after any of the above artists, or after
Hokusai and his school, with the engravings from
which they were executed. We then see clearly the
extent to which the individuality of the chaser is
impressed on the work, or has modified the design
of the painter, more especially when he has trans-
lated it into colour by the use of various metals.

In Yosai's drawings the folds of his draperies are
usually very slightly made out, but the chaser models
them with consummate skill and perfect finish, re-
taining the main lines of the painter's work.
Because of the large amount of detail necessarily
left to the chaser who works from an unshaded
design, it is not easy—scarcely possible, indeed—to
assign a work to any particular painter. As a rule,
one can only indicate the school to which he belongs,
and in figure subjects of nobles and warriors, it is