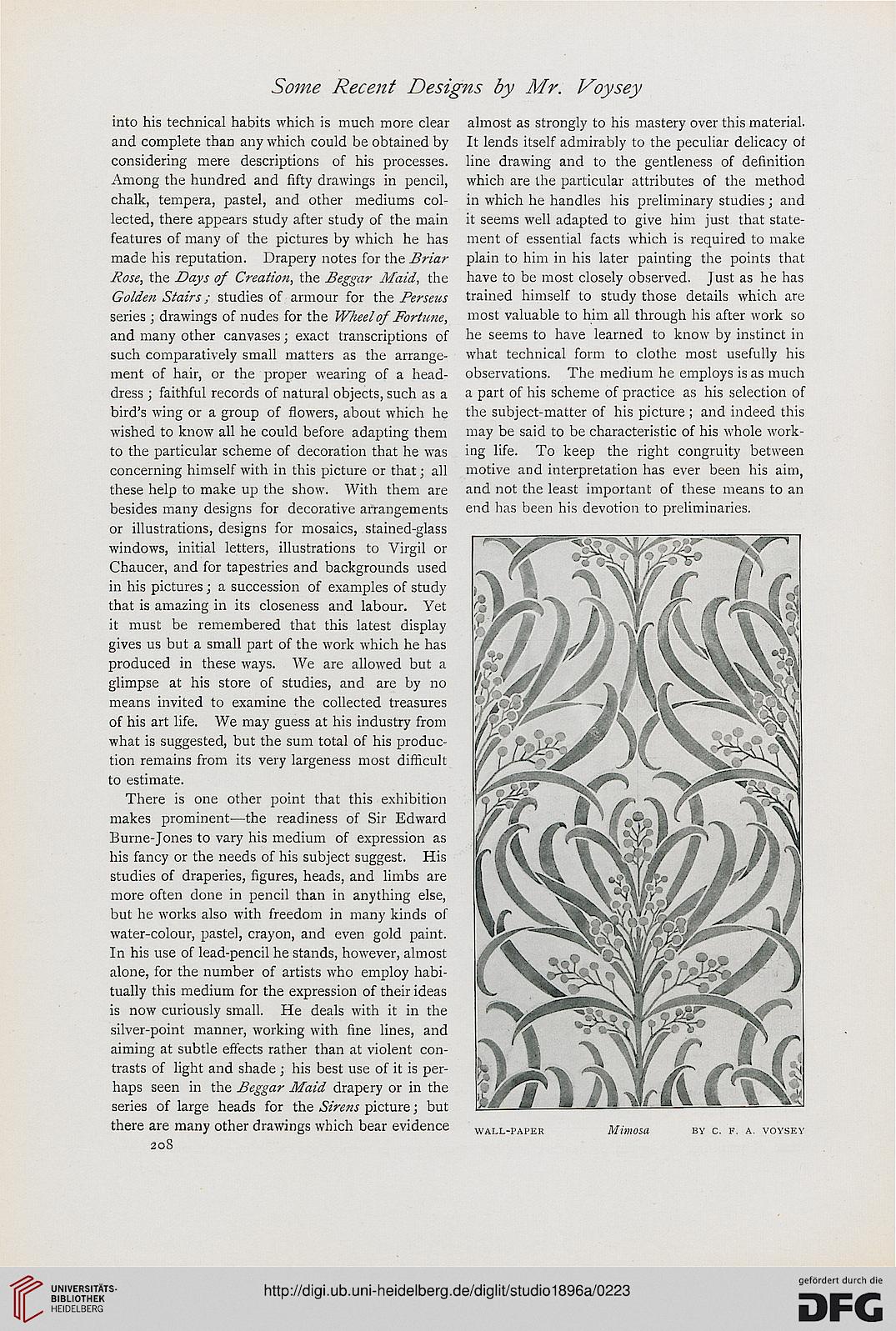 Information about OCR text
Some Recent Designs by Mr. Voysey

into his technical habits which is much more clear
and complete than any which could be obtained by
considering mere descriptions of his processes.
Among the hundred and fifty drawings in pencil,
chalk, tempera, pastel, and other mediums col-
lected, there appears study after study of the main
features of many of the pictures by which he has
made his reputation. Drapery notes for the Briar
Rose, the Days of Creation, the Beggar Maid, the
Golden Stairs; studies of armour for the Perseics
series ; drawings of nudes for the Wheel of Fortime,
and many other canvases; exact transcriptions of
such comparatively small matters as the arrange-
ment of hair, or the proper wearing of a head-
dress ; faithful records of natural objects, such as a
bird's wing or a group of flowers, about which he
wished to know all he could before adapting them
to the particular scheme of decoration that he was
concerning himself with in this picture or that; all
these help to make up the show. With them are
besides many designs for decorative arrangements
or illustrations, designs for mosaics, stained-glass
windows, initial letters, illustrations to Virgil or
Chaucer, and for tapestries and backgrounds used
in his pictures; a succession of examples of study
that is amazing in its closeness and labour. Yet
it must be remembered that this latest display
gives us but a small part of the work which he has
produced in these ways. We are allowed but a
glimpse at his store of studies, and are by no
means invited to examine the collected treasures
of his art life. We may guess at his industry from
what is suggested, but the sum total of his produc-
tion remains from its very largeness most difficult
to estimate.

There is one other point that this exhibition
makes prominent—the readiness of Sir Edward
Burne-Jones to vary his medium of expression as
his fancy or the needs of his subject suggest. His
studies of draperies, figures, heads, and limbs are
more often done in pencil than in anything else,
but he works also with freedom in many kinds of
water-colour, pastel, crayon, and even gold paint.
In his use of lead-pencil he stands, however, almost
alone, for the number of artists who employ habi-
tually this medium for the expression of their ideas
is now curiously small. He deals with it in the
silver-point manner, working with fine lines, and
aiming at subtle effects rather than at violent con-
trasts of light and shade ; his best use of it is per-
haps seen in the Beggar Maid drapery or in the
series of large heads for the Sirens picture; but
there are many other drawings which bear evidence
208

almost as strongly to his mastery over this material.
It lends itself admirably to the peculiar delicacy ot
line drawing and to the gentleness of definition
which are the particular attributes of the method
in which he handles his preliminary studies; and
it seems well adapted to give him just that state-
ment of essential facts which is required to make
plain to him in his later painting the points that
have to be most closely observed. J ust as he has
trained himself to study those details which are
most valuable to him all through his after work so
he seems to have learned to know by instinct in
what technical form to clothe most usefully his
observations. The medium he employs is as much
a part of his scheme of practice as his selection of
the subject-matter of his picture ; and indeed this
may be said to be characteristic of his whole work-
ing life. To keep the right congruity between
motive and interpretation has ever been his aim,
and not the least important of these means to an
end has been his devotion to preliminaries.