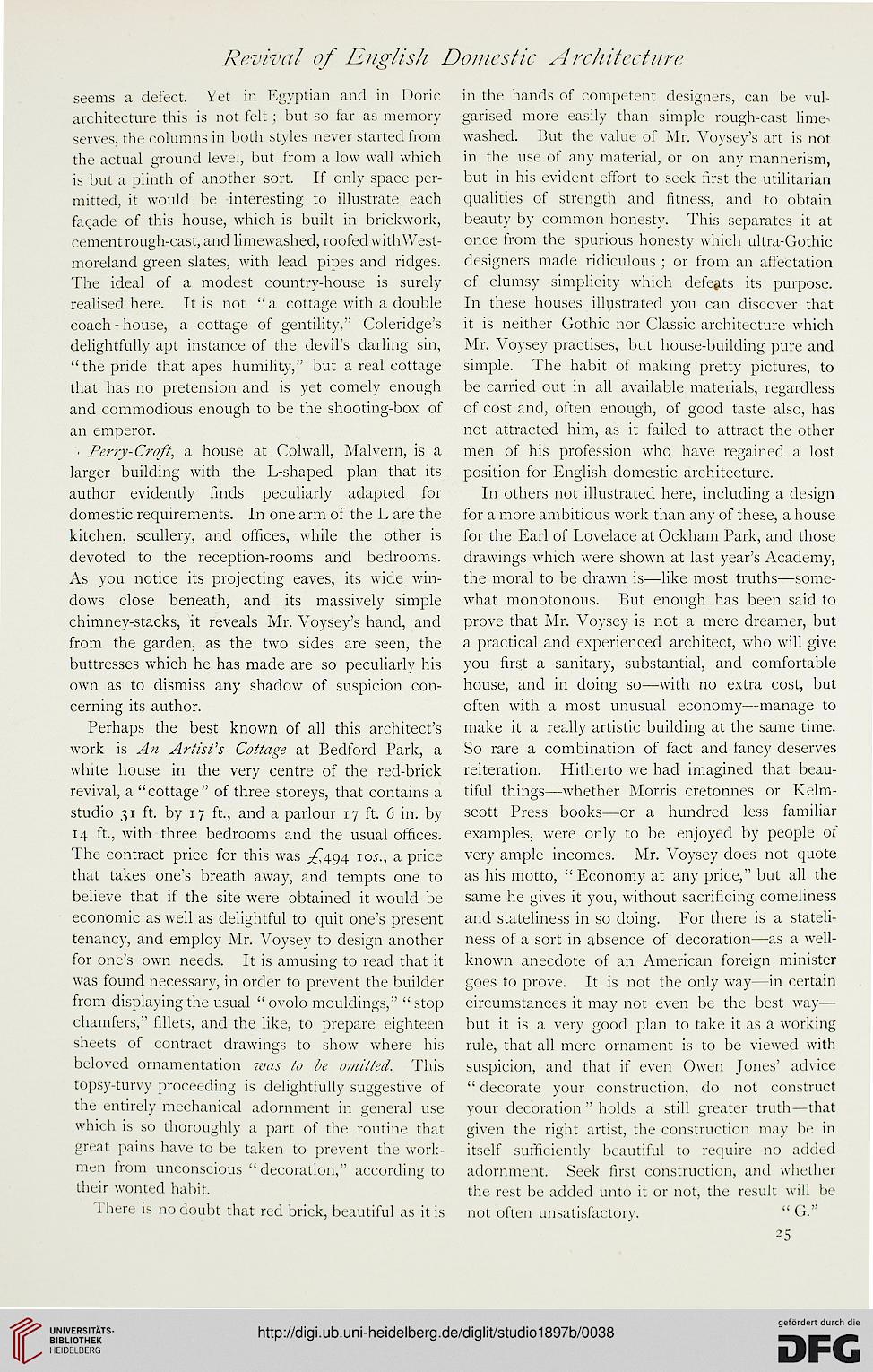 seems a defect. Vet in Egyptian and in Doric
architecture this is not felt ; but so far as memory
serves, the columns in both styles never started from
the actual ground level, but from a low wall which
is but a plinth of another sort. If only space per-
mitted, it would be interesting to illustrate each
facade of this house, which is built in brickwork,
cement rough-cast, and limewashed, roofed with West-
moreland green slates, with lead pipes and ridges.
The ideal of a modest country-house is surely
realised here. It is not "a cottage with a double
coach-house, a cottage of gentility," Coleridge's
delightfully apt instance of the devil's darling sin,
"the pride that apes humility," but a real cottage
that has no pretension and is yet comely enough
and commodious enough to be the shooting-box of
an emperor.

'. Perry-Croft, a house at Colwall, Malvern, is a
larger building with the L-shaped plan that its
author evidently finds peculiarly adapted for
domestic requirements. In one arm of the L are the
kitchen, scullery, and offices, while the other is
devoted to the reception-rooms and bedrooms.
As you notice its projecting eaves, its wide win-
dows close beneath, and its massively simple
chimney-stacks, it reveals Mr. Voysey's hand, and
from the garden, as the two sides are seen, the
buttresses which he has made are so peculiarly his
own as to dismiss any shadow of suspicion con-
cerning its author.

Perhaps the best known of all this architect's
work is An Artist's Cottage at Bedford Park, a
white house in the very centre of the red-brick
revival, a "cottage" of three storeys, that contains a
studio 31 ft. by 17 ft., and a parlour 17 ft. 6 in. by
14 ft., with three bedrooms and the usual offices.
The contract price for this was ^494 10s., a price
that takes one's breath away, and tempts one to
believe that if the site were obtained it would be
economic as well as delightful to quit one's present
tenancy, and employ Mr. Voysey to design another
for one's own needs. It is amusing to read that it
was found necessary, in order to prevent the builder
from displaying the usual " ovolo mouldings," "stop
chamfers," fillets, and the like, to prepare eighteen
sheets of contract drawings to show where his
beloved ornamentation was to be omitted. This
topsy-turvy proceeding is delightfully suggestive of
the entirely mechanical adornment in general use
which is so thoroughly a part of the routine that
great pains have to be taken to prevent the work-
men from unconscious "decoration," according to
their wonted habit.

There is no doubt that red brick, beautiful as it is

in the hands of competent designers, can be vul-
garised more easily than simple rough-cast lime-
washed. But the value of Mr. Voysey's art is not
in the use of any material, or on any mannerism,
but in his evident effort to seek first the utilitarian
qualities of strength and fitness, and to obtain
beauty by common honesty. This separates it at
once from the spurious honesty which ultra-Gothic
designers made ridiculous ; or from an affectation
of clumsy simplicity which defeats its purpose.
In these houses illustrated you can discover that
it is neither Gothic nor Classic architecture which
Mr. Voysey practises, but house-building pure and
simple. The habit of making pretty pictures, to
be carried out in all available materials, regardless
of cost and, often enough, of good taste also, has
not attracted him, as it failed to attract the other
men of his profession who have regained a lost
position for English domestic architecture.

In others not illustrated here, including a design
for a more ambitious work than any of these, a house
for the Earl of Lovelace at Ockham Park, and those
drawings which were shown at last year's Academy,
the moral to be drawn is—like most truths—some-
what monotonous. But enough has been said to
prove that Mr. Voysey is not a mere dreamer, but
a practical and experienced architect, who will give
you first a sanitary, substantial, and comfortable
house, and in doing so—with no extra cost, but
often with a most unusual economy—manage to
make it a really artistic building at the same time.
So rare a combination of fact and fancy deserves
reiteration. Hitherto we had imagined that beau-
tiful things—whether Morris cretonnes or Kelm-
scott Press books—or a hundred less familiar
examples, were only to be enjoyed by people of
very ample incomes. Mr. Voysey does not quote
as his motto, "Economy at any price," but all the
same he gives it you, without sacrificing comeliness
and stateliness in so doing. For there is a stateli-
ness of a sort in absence of decoration—as a well-
known anecdote of an American foreign minister
goes to prove. It is not the only way—in certain
circumstances it may not even be the best way—
but it is a very good plan to take it as a working
rule, that all mere ornament is to be viewed with
suspicion, and that if even Owen Jones' advice
" decorate your construction, do not construct
your decoration " holds a still greater truth — that
given the right artist, the construction may be in
itself sufficiently beautiful to require no added
adornment. Seek first construction, and whether
the rest be added unto it or not, the result will be
not often unsatisfactory. " G."