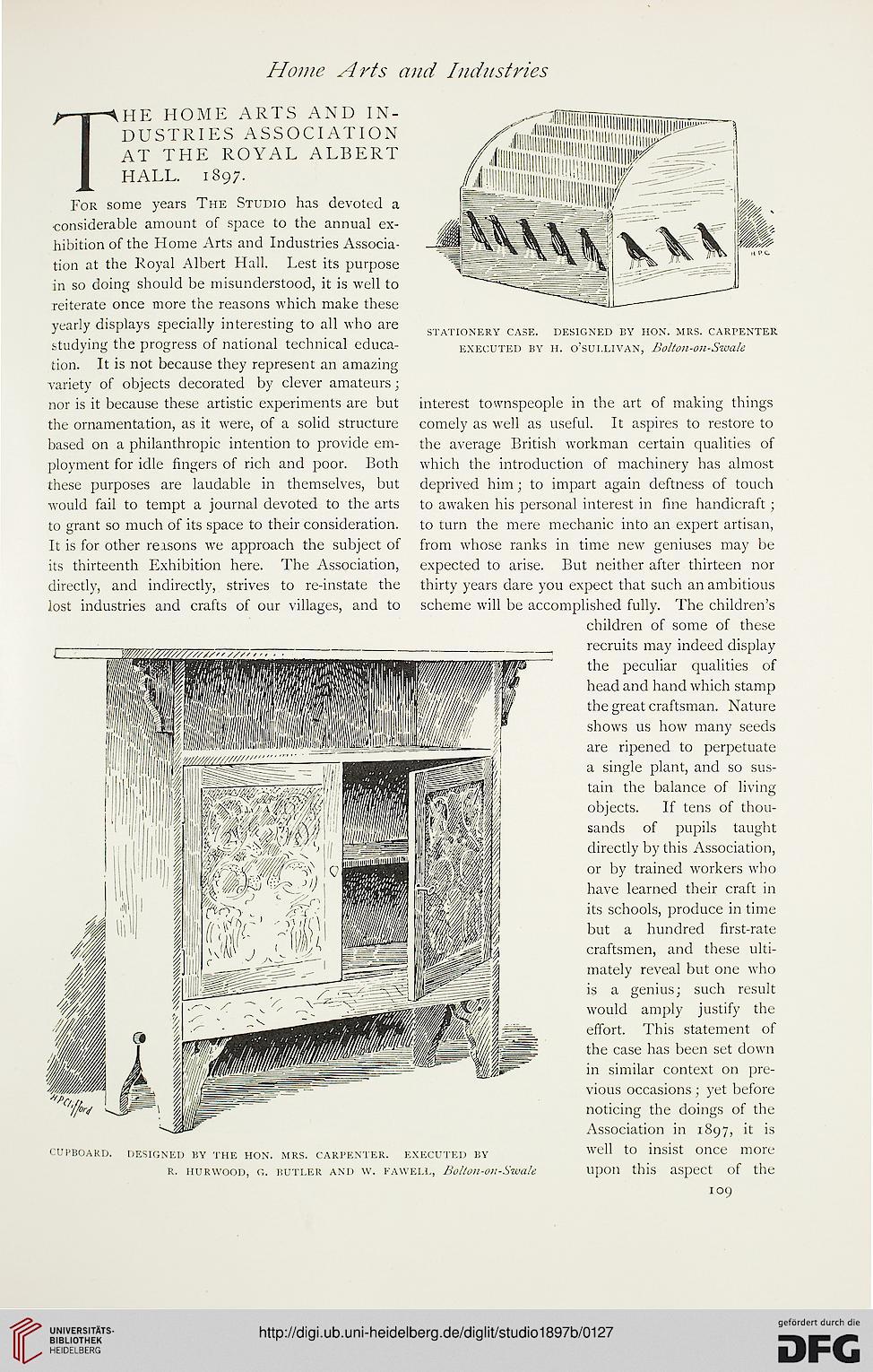 THE HOME ARTS AND IN-
DUSTRIES ASSOCIATION
AT THE ROYAL ALBERT
HALL. 1897.

For some years The Studio has devoted a
considerable amount of space to the annual ex-
hibition of the Home Arts and Industries Associa-
tion at the Royal Albert Hall. Lest its purpose
in so doing should be misunderstood, it is well to
reiterate once more the reasons which make these
yearly displays specially interesting to all who are

tion. It is not because they represent an amazing
variety of objects decorated by clever amateurs;

nor is it because these artistic experiments are but interest townspeople in the art of making things
the ornamentation, as it were, of a solid structure comely as well as useful. It aspires to restore to
based on a philanthropic intention to provide em- the average British workman certain qualities of
ployment for idle fingers of rich and poor. Both which the introduction of machinery has almost
these purposes are laudable in themselves, but deprived him; to impart again deftness of touch
would fail to tempt a journal devoted to the arts to awaken his personal interest in fine handicraft ;
to grant so much of its space to their consideration. to turn the mere mechanic into an expert artisan,
It is for other reisons we approach the subject of from whose ranks in time new geniuses may be
its thirteenth Exhibition here. The Association, expected to arise. But neither after thirteen nor
directly, and indirectly, strives to re-instate the thirty years dare you expect that such an ambitious
lost industries and crafts of our villages, and to scheme will be accomplished fully. The children's

children of some of these

W® the peculiar qualities of

w head and hand which stamp

shows us how many seeds
are ripened to perpetuate
a single plant, and so sus-
tain the balance of living
objects. If tens of thou-
sands of pupils taught
directly by this Association,
or by trained workers who
have learned their craft in
its schools, produce in time
but a hundred first-rate
craftsmen, and these ulti-
mately reveal but one who
is a genius; such result
would amply justify the
H§= effort. This statement of

the case has been set down
in similar context on pre-
vious occasions; yet before

i upboard. designed by the hon. mrs. carpenter. executed by We^ t0 insist ohcc niOlV

r. hurwood, g. butler and w. fa well, Bolton-on-SwaU upon this aspect of the