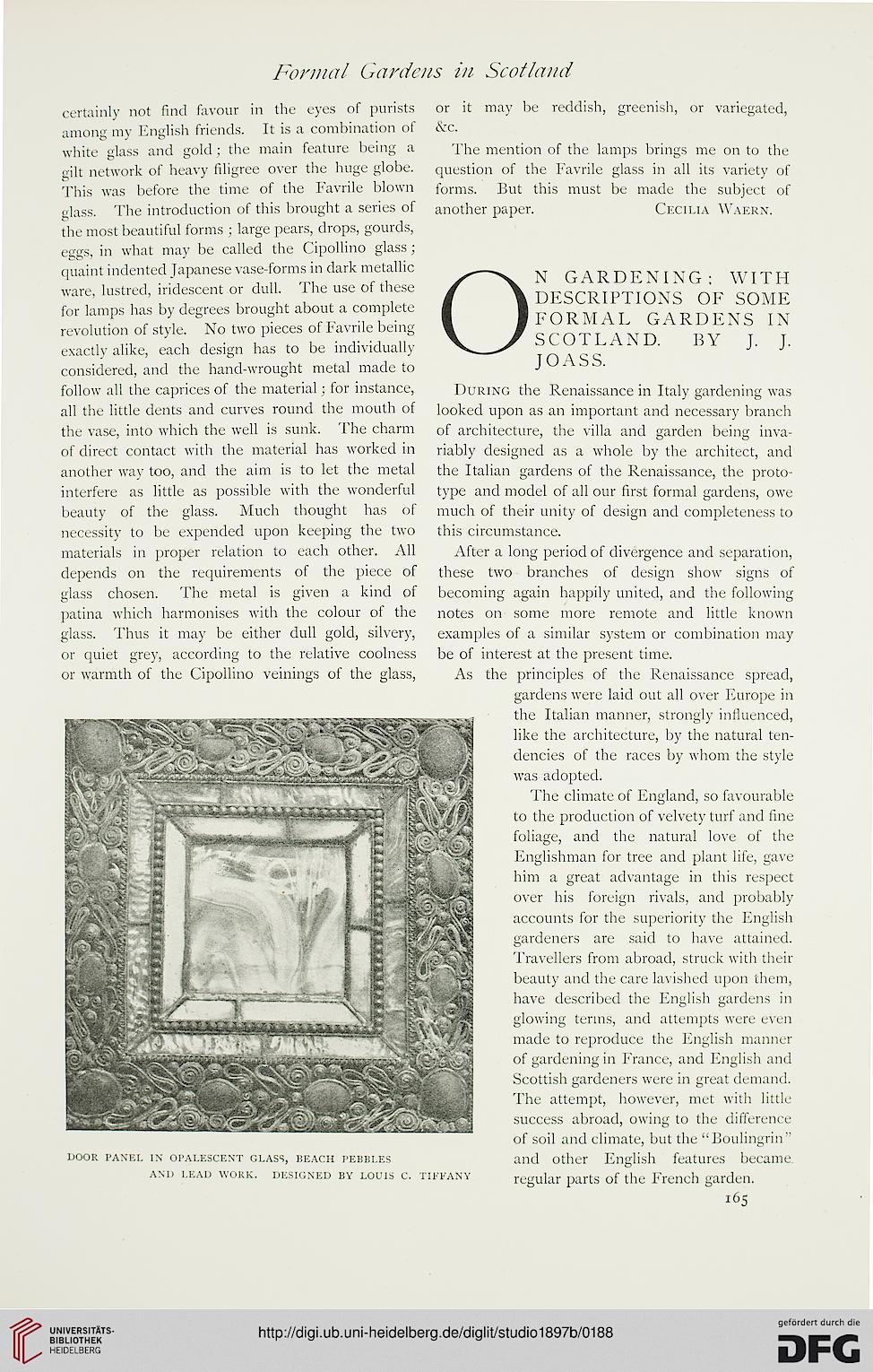 certainly not find favour in the eyes of purists or it may be reddish, greenish, or variegated,

among my English friends. It is a combination of &c.

white glass and gold ; the main feature being a The mention of the lamps brings me on to the

oilt network of heavy filigree over the huge globe. question of the Favrile glass in all its variety of

This was before the time of the Favrile blown forms. But this must be made the subject of

glass. The introduction of this brought a series of another paper. Cecilia Waern.

the most beautiful forms ; large pears, drops, gourds,
eggs, in what may be called the Cipollino glass ;

ware, lustred, iridescent or dull. The use of these
for lamps has by degrees brought about a complete
revolution of style. No two pieces of Favrile being
exactly alike, each design has to be individually

DESCRIPTIONS OF SOME
FORMAL GARDENS IN
SCOTLAND. BY J. J.

considered, and the hand-wrought metal made to jw^oo.

follow all the caprices of the material; for instance, During the Renaissance in Italy gardening was
all the little dents and curves round the mouth of looked upon as an important and necessary branch
the vase, into which the well is sunk. The charm of architecture, the villa and garden being inva-
of direct contact with the material has worked in riably designed as a whole by the architect, and
another way too, and the aim is to let the metal the Italian gardens of the Renaissance, the proto-
interfere as little as possible with the wonderful type and model of all our first formal gardens, owe
beauty of the glass. Much thought has of much of their unity of design and completeness to
necessity to be expended upon keeping the two this circumstance.

materials in proper relation to each other. All After a long period of divergence and separation,
depends on the requirements of the piece of these two branches of design show signs of
glass chosen. The metal is given a kind of becoming again happily united, and the following
patina which harmonises with the colour of the notes on some more remote and little known
glass. Thus it may be either dull gold, silvery, examples of a similar system or combination may
or quiet grey, according to the relative coolness be of interest at the present time,
or warmth of the Cipollino veinings of the glass, As the principles of the Renaissance spread,

gardens were laid out all over Europe in
the Italian manner, strongly influenced,
like the architecture, by the natural ten-
dencies of the races by whom the style
was adopted.

The climate of England, so favourable
to the production of velvety turf and fine
foliage, and the natural love of the
Englishman for tree and plant life, gave
him a great advantage in this respect
over his foreign rivals, and probably
accounts for the superiority the English
gardeners are said to have attained.

Travellers from abroad, struck with their
beauty and the care lavished upon them,
have described the English gardens in
glowing terms, and attempts were even
made to reproduce the English manner
of gardening in France, and English and
Scottish gardeners were in great demand.
The attempt, however, met with little
success abroad, owing to the difference
of soil and climate, but the "Boulingrin"
door panel ix oi'Alescext class, beach pebbles and other English features became