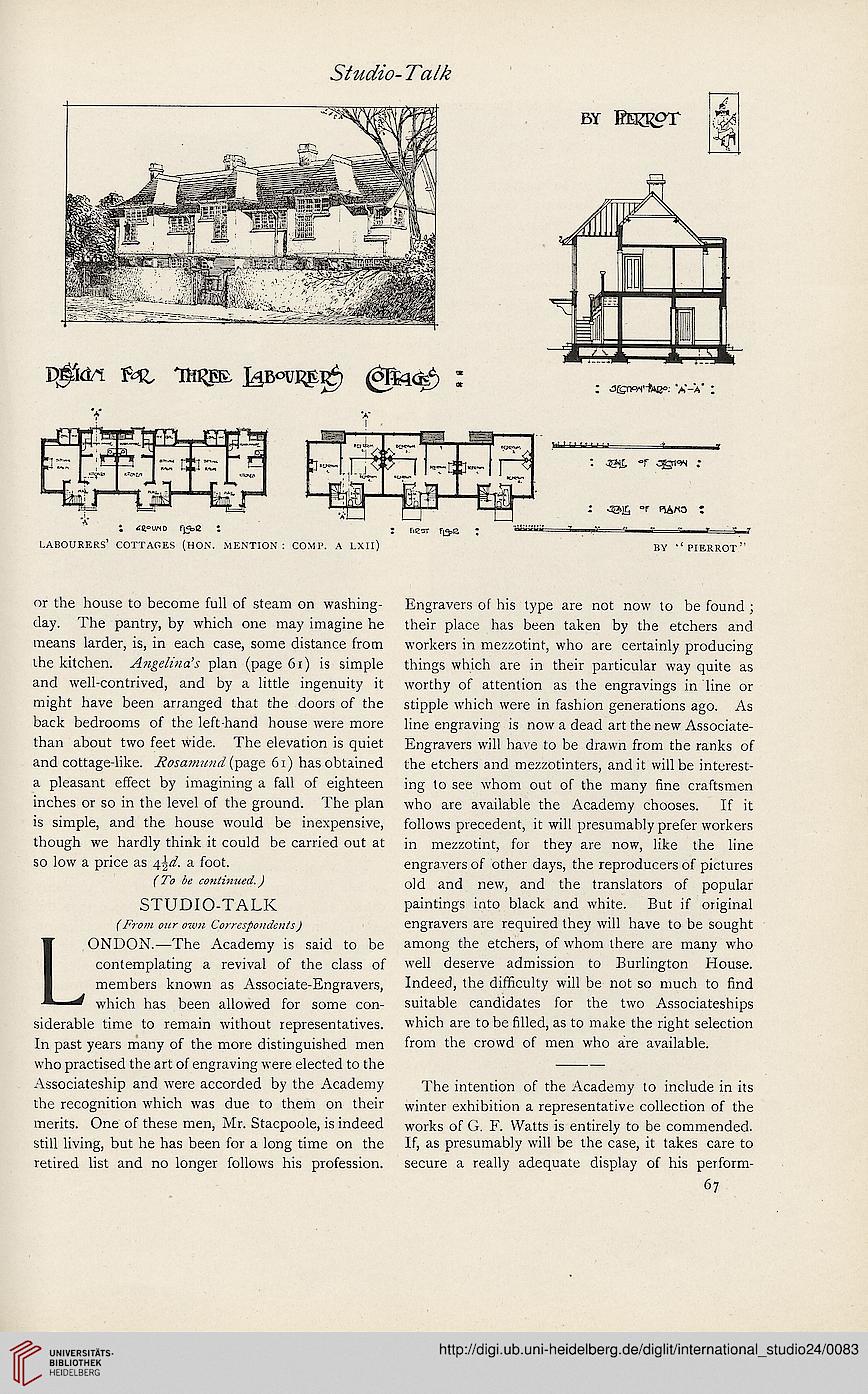 or the house to become full of steam on washing-
day. The pantry, by which one may imagine he
means larder, is, in each case, some distance from
the kitchen. Angelina's plan (page 61) is simple
and well-contrived, and by a little ingenuity it
might have been arranged that the doors of the
back bedrooms of the left-hand house were more
than about two feet wide. The elevation is quiet
and cottage-like. Rosamund{page 61) has obtained
a pleasant effect by imagining a fall of eighteen
inches or so in the level of the ground. The plan
is simple, and the house would be inexpensive,
though we hardly think it could be carried out at
so low a price as 4\d. a foot.
(To be continued.)
STUDIO-TALK
(From our own Correspondents)
LONDON.—The Academy is said to be
contemplating a revival of the class of
members known as Associate-Engravers,
which has been allowed for some con-
siderable time to remain without representatives.
In past years many of the more distinguished men
who practised the art of engraving were elected to the
Associateship and were accorded by the Academy
the recognition which was due to them on their
merits. One of these men, Mr. Stacpoole, is indeed
still living, but he has been for a long time on the
retired list and no longer follows his profession.

Engravers of his type are not now to be found ;
their place has been taken by the etchers and
workers in mezzotint, who are certainly producing
things which are in their particular way quite as
worthy of attention as the engravings in line or
stipple which were in fashion generations ago. As
line engraving is now a dead art the new Associate-
Engravers will have to be drawn from the ranks of
the etchers and mezzotinters, and it will be interest-
ing to see whom out of the many fine craftsmen
who are available the Academy chooses. If it
follows precedent, it will presumably prefer workers
in mezzotint, for they are now, like the line
engravers of other days, the reproducers of pictures
old and new, and the translators of popular
paintings into black and white. But if original
engravers are required they will have to be sought
among the etchers, of whom there are many who
well deserve admission to Burlington House.
Indeed, the difficulty will be not so much to find
suitable candidates for the two Associateships
which are to be filled, as to make the right selection
from the crowd of men who are available.

The intention of the Academy to include in its
winter exhibition a representative collection of the
works of G. F. Watts is entirely to be commended.
If, as presumably will be the case, it takes care to
secure a really adequate display of his perform-
67