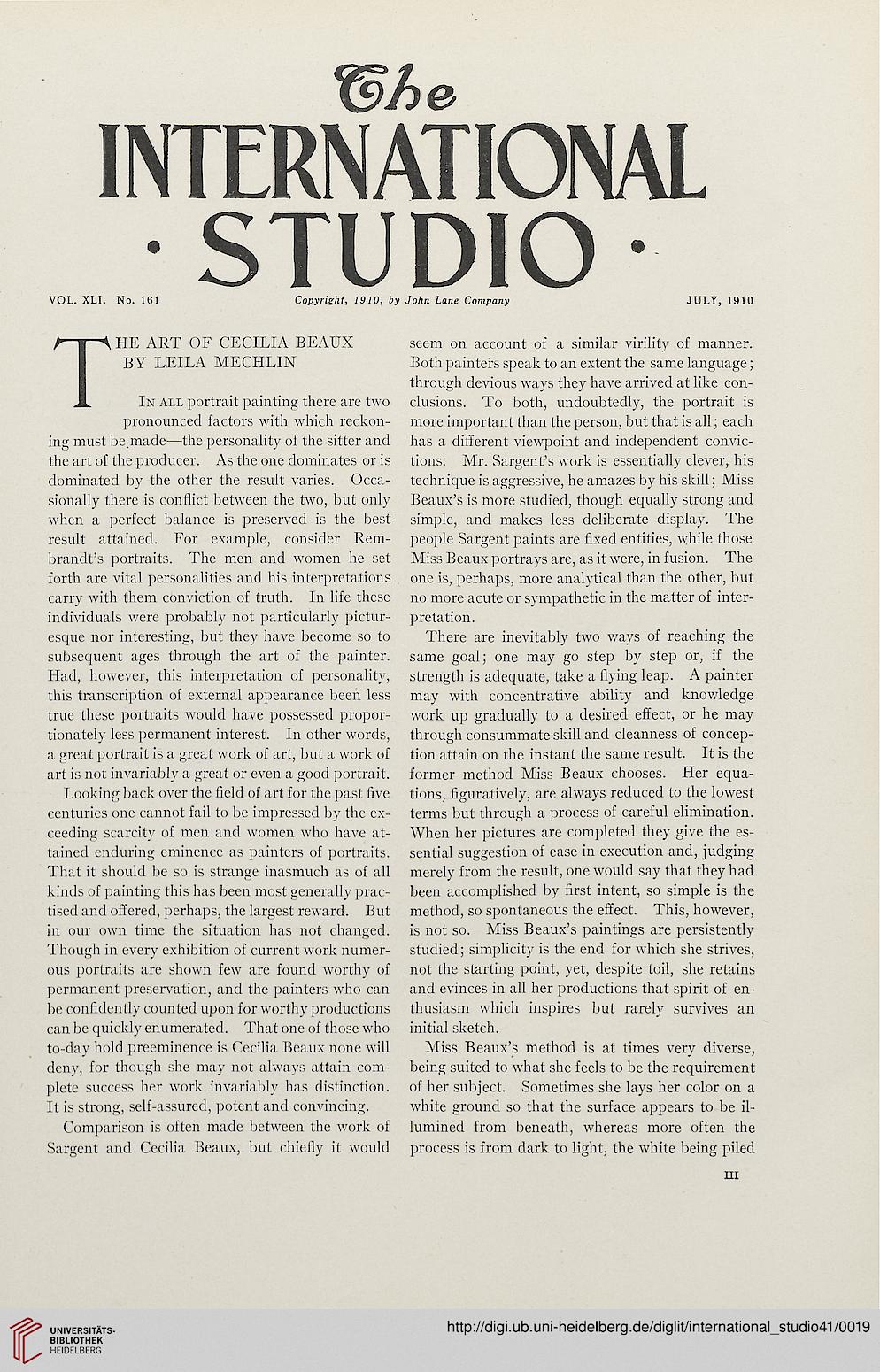 THE ART OF CECILIA BEAUX seem on account of a similar virility of manner.
BY LEILA MECHLIN Both painters speak to an extent the same language;
through devious ways they have arrived at like con-
In all portrait painting there are two elusions. To both, undoubtedly, the portrait is
pronounced factors with which reckon- more important than the person, but that is all; each
ing must be.made—the personality of the sitter and has a different viewpoint and independent convic-
the art of the producer. As the one dominates or is tions. Mr. Sargent's work is essentially clever, his
dominated by the other the result varies. Occa- technique is aggressive, he amazes by his skill; Miss
sionally there is conflict between the two, but only Beaux's is more studied, though equally strong and
when a perfect balance is preserved is the best simple, and makes less deliberate display. The
result attained. For example, consider Rem- people Sargent paints are fixed entities, while those
brandt's portraits. The men and women he set Miss Beaux portrays are, as it were, in fusion. The
forth are vital personalities and his interpretations one is, perhaps, more analytical than the other, but
carry with them conviction of truth. In life these no more acute or sympathetic in the matter of inter-
individuals were probably not particularly pictur- pretation.

esque nor interesting, but they have become so to There are inevitably two ways of reaching the
subsequent ages through the art of the painter, same goal; one may go step by step or, if the
Had, however, this interpretation of personality, strength is adequate, take a flying leap. A painter
this transcription of external appearance been less may with concentrative ability and knowledge
true these portraits would have possessed propor- work up gradually to a desired effect, or he may
tionately less permanent interest. In other words, through consummate skill and cleanness of concep-
a great portrait is a great work of art, but a work of tion attain on the instant the same result. It is the
art is not invariably a great or even a good portrait, former method Miss Beaux chooses. Her equa-
Looking back over the field of art for the past five tions, figuratively, are always reduced to the lowest
centuries one cannot fail to be impressed by the ex- terms but through a process of careful elimination,
feeding scarcity of men and women who have at- When her pictures are completed they give the es-
tained enduring eminence as painters of portraits, sential suggestion of ease in execution and, judging
That it should be so is strange inasmuch as of all merely from the result, one would say that they had
kinds of painting this has been most generally prac- been accomplished by first intent, so simple is the
tised and offered, perhaps, the largest reward. But method, so spontaneous the effect. This, however,
in our own time the situation has not changed, is not so. Miss Beaux's paintings are persistently
Though in every exhibition of current work numer- studied; simplicity is the end for which she strives,
ous portraits are shown few are found worthy of not the starting point, yet, despite toil, she retains
permanent preservation, and the painters who can and evinces in all her productions that spirit of en-
be confidently counted upon for worthy productions thusiasm which inspires but rarely survives an
can be quickly enumerated. That one of those who initial sketch.

to-day hold preeminence is Cecilia Beaux none will Miss Beaux's method is at times very diverse,

deny, for though she may not always attain com- being suited to what she feels to be the requirement

plete success her work invariably has distinction, of her subject. Sometimes she lays her color on a

It is strong, self-assured, potent and convincing. white ground so that the surface appears to be il-

Comparison is often made between the work of lumined from beneath, whereas more often the

Sargent and Cecilia Beaux, but chiefly it would process is from dark to light, the white being piled